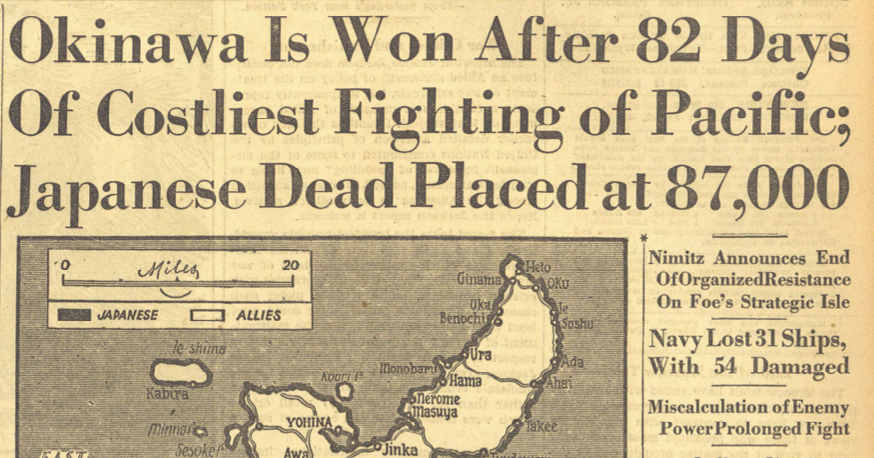 Special to the European Edition.

Conquest of the sixty-seven square-mile island was accomplished after eighty-two days of the costliest fighting of the Pacific. For the 5th Fleet and 10th Army the price was high. Not since Pearl Harbor has the Navy taken such losses — thirty-one ships, sunk up to June 16 and fifty-four, including four large units, damaged.

[The United Press said that a total of 87,343 Japanese dead had been counted through Tuesday, and that 2,565 troops of the enemy had surrendered.]

Every one knew that Okinawa would be bitterly defended. No other island wrested from Japan since the offensive’s start has had such enormous strategic importance. Properly developed as an air base, Okinawa in our hands will cut off Formosa from Japan and permit blockade of the North China Yellow Sea and Corean Straits.

It was expected that Okinawa would be defended by two armies mustering perhaps 60,000 combat effectives and 10,000 to 15,000 service troops. We did not know that enemy units were swollen beyond normal strength by the absorption of Okinawa reservists who fought nearly as well as the Japanese.

This miscalculation of the enemy — early admitted by the 10th Army’s late commander, General Simon Bolivar Buckner Jr. — and an unexpectedly stout defense of Shuri were reasons why the campaign dragged on so long.

Only by a steady stream of replacements was General Buckner, who was killed in action only last Sunday, able to keep his divisions at fighting strength, so grim was the casualty toll in frontal assaults on successive ridges above Shuri. The 96th Division suffered the heaviest loss, but all others — the 77th, 27th and 1st and 6th Marines — also suffered severe attrition.