To come to this sprawling, dynamic Brazilian city without preconceptions, whether they’re about bikinis or President Jair Bolsonaro, is just about impossible. But Rio constantly finds ways to surprise — whether it’s a friendly resident walking you to a shop you just can’t find; sobering evidence of the city’s slave trade; or the discovery that food tastes best standing on a sidewalk surrounded by the lyrical sound of Portuguese and accompanied by a beer so cold it’ll make your fillings hurt. From beach to museum, church to market, Rio is a city constantly defying its own myths and encourages visitors to join in with unbridled enthusiasm.

Brazilian cuisine leans heavily on meat and seafood, so it’s a pleasure to find vegetarian food that’s neither fried nor boring. Naturalie is open only for lunch, and its menu (much of it vegan and gluten-free) makes good use of local produce like manioc and coconut. Salads come with a bright pink beet dressing; there’s a rich stew known as feijoada that replaces meat with tofu; and fresh juices are crammed with passion fruit, hibiscus and goji berries, and — unlike their lunch-counter counterparts — they aren’t full of added sugar. It’s carefully considered, unfussy dining that just happens to be vegetarian. Lunch for two, around 100 reals, or about $26.

The South Zone of Rio is home to the tony neighborhoods of Ipanema and Copacabana, which also have the best beaches: stretches of pristine sand bordering gentle waves. Pick up a bathing suit at Blue Man, a decades-old Brazilian brand of swimwear that produces eye-catching bikinis, one-pieces and briefs in colorful parrot and pineapple patterns (prices start around 150 reals). Swing by Osklen, another well-known Brazilian brand, which sells elegant T-shirts in linen and silk. They recently developed a line of clothing printed with images from the work of the pioneering Brazilian artist Tarsila do Amaral (an exhibition of her work was at the Museum of Modern Art in New York City last year). At Monica Pondé, just around the corner, pick up brushed silver necklaces with geometric flair (Ms. Mondé, the designer, studied architecture), and grab a petit noir coffee from the adjacent cafe: the beans are collected from the droppings of the jacu, a native bird that ingests only the very ripest beans, and the resulting coffee is rich and full-bodied. Make a final stop at Toca do Vinicius, a shop for music lovers, where all the vintage records and newly released CDs are bossa nova and samba.

More on traveling in Brazil
36 Hours in Salvador, Brazil 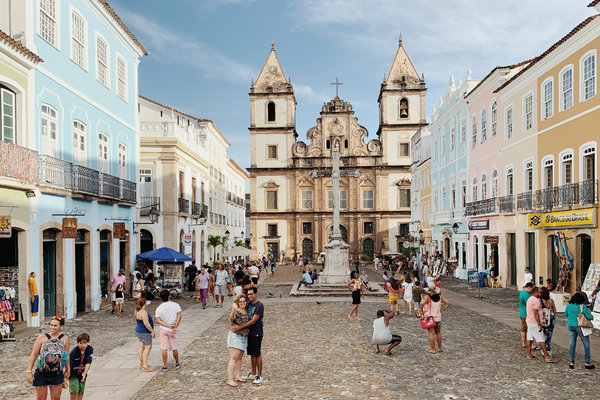 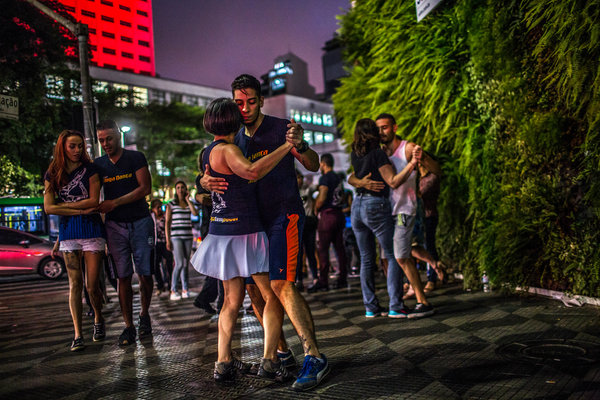 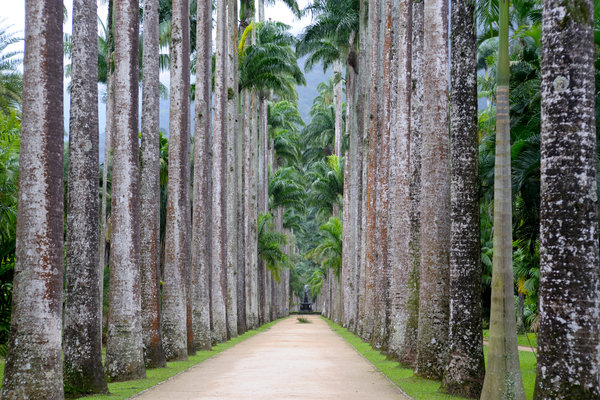 Pavão Azul (blue peacock) is an excellent spot to kick off an evening. Packed with an after-work crowd vying for seats or standing around small tables, this place is famous for its pataniscas: fried balls with chunks of cod and slivers of onion, and served with extra-cold beer. If you’re feeling brave, try the vodka-coconut mix poured out of a Smirnoff bottle — it’s made in-house and is equal parts delicious and potent. Then stroll north to Galeto Sat’s, a casual spot with just a dozen tables and, behind the bar, rows of spring chickens roasting on giant skewers over the flames. Start with a basket of the famous garlic bread, buttery and liberally doused with garlic bits, add a plate of juicy, bite-sized chicken hearts, then round off the meal with the roast chicken. Dinner for two, around 120 reals.

Bip-bip is coming up on 60 years in spite of the fact that it’s the kind of local bar that seems to be actively discouraging new customers. The only seats are occupied by the musicians and the owner’s cronies, and the beer — a selection of mediocre Brazilian brands and cans of Heineken — is in a refrigerator in the back from which you have to help yourself. The owner, Alfredinho, sits with his ledger tallying beers (around 6 reals; alert him whenever you pull one from the fridge) and shushing talkers. The music, though, is worth twice as much hassle: Expect to find a group of eight or so playing and singing samba and bossa nova with passion. That passion is shared by the onlookers, who dance, sing along (quietly) and snap their fingers in applause.

The Santiago Calatrava-designed Museum of Tomorrow (admission, 20 reals) opened with great fanfare in 2015. Inside, the exhibits are mostly virtual — hundreds of towering screens, some with interactive games, and an IMAX-style film — but the content itself focuses more on the nature of community, sustainability and disaster-forecasting than on futuristic imaginings. The exterior and the grounds of the museum are, perhaps, even more impressive. Stroll around the water features, admire the audacious architecture (it’s been compared to everything from a spaceship to a crocodile), and then head to the Museu de Arte do Rio (admission 20 reals) across the plaza. This dynamic museum has a frequently changing collection of work by mostly Brazilian artists. Make sure to visit the roof, from which you can see, across the way, a portrait blasted in stone on the side of a neighboring building by the Portuguese artist Alexandre Farto, known as Vhils.

Afro-Brazilian history and the slave trade in particular is an integral yet understudied part of the country’s heritage. Spend a few hours exploring its legacy, starting with lunch at Angu do Gomes. This restaurant first opened in 1955, serving angu, a hearty polenta and meat stew with African roots (lunch for two, around 150 reals). From here, walk to Valongo Wharf, a Unesco Heritage Site, which was the arrival point for almost a million slaves, most from West and Central Africa. The wharf itself had been covered over and was only rediscovered amid preparations for the 2016 Olympics. Not far from here is Praça XV. There’s not much to be seen now in this huge space except a boat-ticketing office and some skateboarders, but it was once the site of massive slave auctions. The Instituto de Pesquisa e Memória Pretos Novos (open 11 a.m. to 2 p.m., free admission), is a small but sobering museum about the slave trade built atop a cemetery — you can still see bones exposed in the ground.

Rather than join the crowds lining up to board the cable cars to the top of Pão de Açúcar, head to the mountain’s base instead. The Claudio Coutinho trail is bordered with steep slopes and trees populated with families of capuchin monkeys on one side, and waves crashing against enormous rocks on the other. After you’ve broken a sweat, stroll in the other direction around the peninsula (or take a short taxi ride) to Bar Urca, a longtime neighborhood landmark dishing out crispy pastries stuffed with meat, bobó de camarão (a creamy shrimp dish), icy beers and fried balls of bacalao (snacks and beer for two, around 130 reals). Take your goodies and join the locals perching on the sea wall across the street, with the water susurrating beneath you and small boats floating nearby.

The Leblon neighborhood, home to some of the city’s best bars and restaurants, is getting trendier by the day. Stop in at Mixxing for a pre-dinner drink; the cozy bar usually has both a D.J. and a handful of loyal customers who deeply appreciate that the drinks — many invented by the bartenders and incorporating ingredients like a ginger foam with the texture of heavy cream — are some of the cleverest cocktails in town. Dinner is at Oro, which got its second Michelin star in 2018. Felipe Bronze, the chef, has created tasting menus of modern Brazilian dishes that recently included granulated tapioca with shrimp and chayote, gnocchi formed from cured egg yolk, and a starter of sweet potato bread with smoked catupiry butter. Dinner for two, 670 reals.

Stick around Botafogo for the night, strolling from bar to bar. Start with a sidewalk table at WineHouse, a small spot with many local wines on the menu, including a few by the glass (try some Brazilian sparkling wine, which is having a moment). Then head to CoLAB, a hip spot that’s part bar, part cafe and part venue. Expect craft A.P.A.s and wheat beers on draft, live music, and a youthful, talkative crowd at the communal tables. Nearby, Comuna has sandwiches, drinks and chilled-out electronic music perfect for whiling away the wee hours.

Each Sunday at 10 a.m., the 17th-century Mosteiro de São Bento (free) welcomes a full house for its mass, which includes impressive Gregorian chanting. Inside, the spectacular church is filled with gold; a series of arches leads to an elevated platform where the monks sing and preach in turn. You can follow along with the Portuguese using the free pamphlet which lays out the program. It’s strange that even in a city with such a racially diverse population, all the statues in the church have light-skinned faces.

Spread out along the side of the Paris Park every Sunday morning, the Feira da Glória is one of the city’s best, most colorful food markets. Pick up a late breakfast or early lunch of tapioca pancakes stuffed with melted ham and cheese, a box of sliced pineapple, sugar cane juice or sushi, and stroll down the line of stalls whose owners loudly advertise their colorful arrays of fresh greens, fruit, spices and flowers. At one end there’s pet fish and a secondhand market of old clothes, and live music (that may include a band of highly skilled drummers) is common.

Copacabana might be so famous as to be almost a cliché, but it’s still one of the best city beaches in the world. Quiosques, or kiosks, dole out draft beer, caipirinhas and bags of Globos (crunchy rings made from manioc starch) right on the sand, groups of men in tiny swimsuits play hands-free volleyball, vendors sell sarongs emblazoned with the Brazilian flag, and everyone’s there to have a good time. A 10-minute walk south is Arpoador Beach, where you’ll often see surfers floating on the water like sea gulls waiting to catch the perfect wave. If you’re here around sunset, join the groups climbing the rocks at the eastern end of the beach for the best views.

There are plenty of Airbnb options in Rio; a one-bedroom is often available for less than $50 a night (depending on the season). Botafogo and Flamengo are central neighborhoods positioned between the southern beaches and the cultural offerings of the northern section of the city.

The clean, spare Praia Ipanema (doubles start around 490 reals, including breakfast) is as close as Rio hotels get to the beach, which is just across the road. All rooms have balconies and superior rooms have ocean views. The hotel has a beach stand with free chairs and towels.

Halfway between the port area and the South Zone, the funky, Philippe Starck-designed Yoo2 (doubles start at 270 reals, including breakfast) has a prime location for city exploration. The small rooftop pool has great views of the Christ the Redeemer statue in one direction and Botafogo beach in the other.

A version of this article appears in print on , on Page TR9 of the New York edition with the headline: Rio de Janeiro. Order Reprints | Today’s Paper | Subscribe