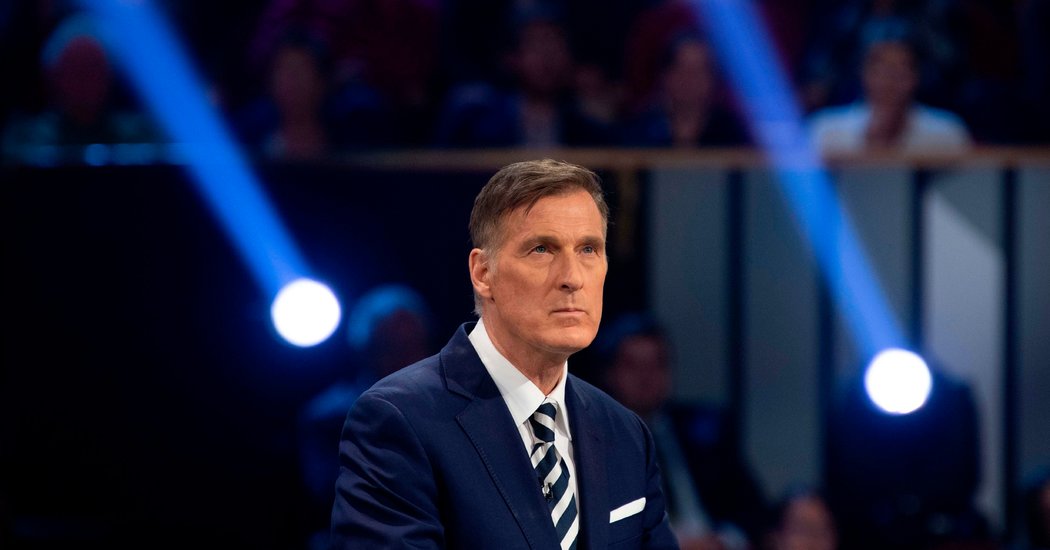 MONTREAL — For Canada, it wasn’t a typical campaign event.

At a college in Hamilton, Ontario, protesters chanted “Nazi scum, off our streets!” and clashed with supporters of the populist Canadian leader, Maxime Bernier, a member of Parliament who embraces his nickname “Mad Max” and rails against immigration and climate change “hysteria.”

There was violent pushing and shoving on both sides, according to the police, and anti-Bernier protesters tried to block an 81-year-old woman with a walker from entering the venue where Mr. Bernier was scheduled to speak.

The altercation late last month might seem familiar in the United States or Europe, where far-right movements have ridden a wave of populism in recent years. But in Canada, a country that prides itself on its political decorum and multiculturalism, it underscored the extent to which Mr. Bernier is jolting the political landscape as the national election approaches on Oct. 21.

Mr. Bernier, a former industry and foreign affairs minister, leads the People’s Party of Canada, a far-right party he founded last year after he ran — and narrowly lost — a race in 2017 to lead the Conservatives, the country’s main opposition party. He has been a member of Parliament for 13 years.

To his supporters, Mr. Bernier, a lanky provocateur, is a folk hero for free speech. He has proposed building a fence on parts of Canada’s southern border as a bulwark against immigrants. He has warned that newcomers threaten to bring distrust and potential violence.

Mr. Bernier seeks to distance himself from President Trump, but appears to have borrowed from his playbook. He uses Twitter as a trenchant megaphone. “We are breaking taboos about immigration and multiculturalism and Canadians appreciate our frankness,” he said by phone from Ontario, where he was campaigning.

No one has thus far been elected to the House of Commons under his party’s banner — not even him. He won his seat when he was a Conservative. But even if his party remains as electorally marginal as analysts say it is, his critics say he is dangerous.

At a nationally televised debate this month in Ottawa, his opponents accused him of fear-mongering and inciting hatred. The leader of the Conservatives, Andrew Scheer, berated him, “You are making your policy based on trying to get likes and retweets from the darkest part of Twitter.”

Jackson Gates, a paralegal student at Mohawk College, where the confrontation in Hamilton occurred, said, “Bernier is a racist and represents the opposite of what Canadians stand for.”

Mr. Gates appealed unsuccessfully to college authorities to block the event, saying Mr. Bernier promoted hate speech. “If Bernier got into power he would push the clock on Canadian progress back decades,” Mr. Gates said.

After the event, a Toronto restaurant run by Syrian refugees temporarily shut down after the owners received hate messages and death threats over their son’s participation in the protests against Mr. Bernier.

But Mr. Bernier, 56, the son of a former parliamentarian from Quebec’s Beauce region, is adamant that he is no racist. Rather, he said, he is a “free market populist” articulating what many Canadians think in a country consumed by political correctness.

While far-right parties have failed to gain much traction in Canada, analysts say the People’s Party has had an influence on the campaign by pushing immigration policy toward center stage.

“Bernier is appealing to nationalism and emotions and is influencing the national political debate,” said Jean-François Daoust, an expert on public opinion at McGill University.

He noted that, in response to Mr. Bernier, the right-leaning Conservative Party had tacked further right on immigration, including redoubling on its pledge to end illegal border crossings by asylum-seekers.

And with Prime Minister Justin Trudeau’s Liberals and the opposition Conservatives neck and neck in the polls, he said Mr. Bernier threatened the Conservatives by lapping up vital votes.

[Andrew Scheer is polling neck and neck with Prime Minister Justin Trudeau, but he lacks star power. Can he overcome that and win?]

Benjamin Ducol, deputy director at the Montreal-based Center for the Prevention of Radicalization Leading to Violence, said Mr. Bernier’s significance was that “he is giving the extreme right a voice in the political mainstream.”

Mr. Bernier is not Canada’s first populist politician; some of his views echo those of Doug Ford, the combative current premier of Ontario, who came to power by fulminating against the establishment.

Quebec, Mr. Bernier’s home province, is also led by a popular right-leaning populist party that recently passed a law banning teachers, judges and police from wearing religious symbols such as head scarves while at work.

Like other populist leaders, Mr. Bernier sees himself as a defender of national values. He wants to limit immigration and to introduce a values test to ensure immigrants embrace Canadian priorities like gender equality.

“Countries that have Shariah Law do not have the same values as we do,” he said, referring to Islamic law.

Mr. Bernier is no stranger to controversy. He was forced to resign as foreign minister in 2008 after leaving classified documents at the home of a girlfriend with past ties to the Hells Angels motorcycle gang.

More recently, he was accused of cyberbullying a child after he called the 16 year-old climate activist Greta Thunberg “clearly mentally unstable” on Twitter.

Martin Masse, head of policy for the People’s Party, said Mr. Bernier’s penchant for provocation was necessary to get attention. But he recoiled at criticism that party members were xenophobic radicals.

“The biggest misconception is that we are an extreme right-wing party,” he said. “I am gay, and the party is open to people of all backgrounds.”

Salim Mansur, a Muslim and former professor of political science at the University of Western Ontario, who is running for Parliament for the People’s Party in Ontario, said Mr. Bernier was “trying to stand up and change the national conversation.”

Rebuking multiculturalism, he said it was “idiotic” to put “camel-riding desert dwellers” on the same level as “a culture that put man on the moon.”

Mr. Bernier is the son of Gilles Bernier, a former radio personality, who was once Canada’s ambassador to Haiti. The father taught the son how to campaign. Maxime Bernier’s other political mentor, he said, was Margaret Thatcher.

Since entering politics in 2006, Mr. Bernier has won his father’s old seat in the House of Commons four times — undermining his self-image as a plucky outsider.

Mr. Bernier, a lawyer, honed his economic thinking during nearly two decades working in the financial sector. He has long favored deregulation.

While Mr. Bernier faces an uphill struggle to transform his party into a national movement, he said he was undeterred. “We are not trying to please everyone,” he said.