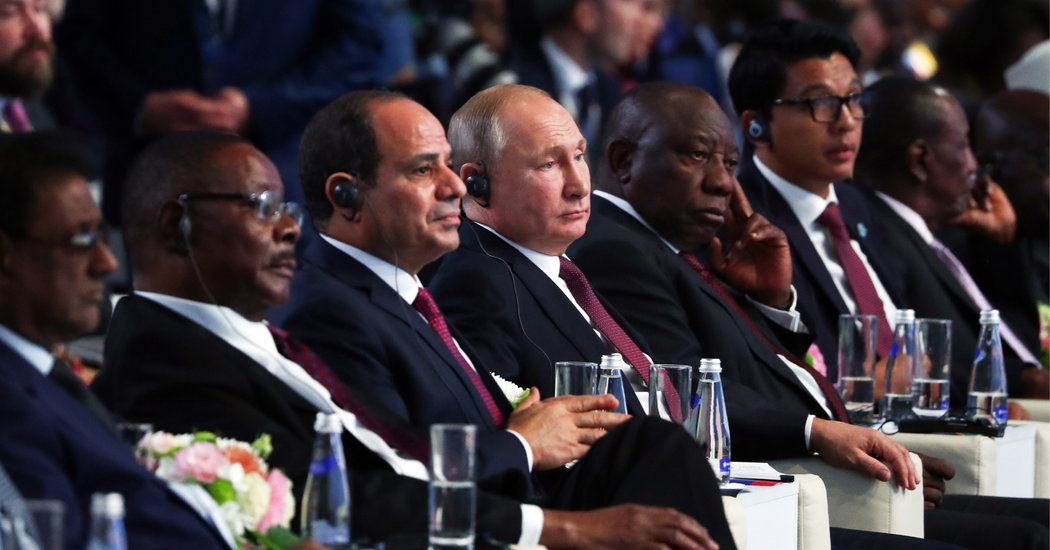 SOCHI, Russia — Jose Matemulane said he left his native Mozambique nearly two decades ago, spent years studying in St. Petersburg and saw the Russian soul. Now he’s in the vanguard of Russia’s new foray onto his home continent, where he is spreading the word that working with Moscow to reduce the influence of Americans and other Westerners is in Africa’s best interests.

“The Russians have their own way of thinking different from the Western patterns,” Mr. Matemulane said. “I used to tell people: Russians are nothing else than white Africans, white blacks.”

Russia has been playing for power in Africa in recent years by sending arms, offering mercenaries, and cinching mining deals. More quietly, it has started to set up a low-profile infrastructure of political influence that bears echoes of the Kremlin’s strategy in Europe and the United States. And it is already identifying African politicians and activists who will carry its message.

Deploying its international propaganda arms, the television channel RT and the Sputnik news agency, the Kremlin is honing this message: While Western Europe and the United States are continuing a centuries-old tradition of exploiting Africa, Moscow is ready to engage with Africa on mutually beneficial terms.

Russia is also benefiting from a desire by African countries to lessen their reliance on China, even as Moscow acknowledges that it cannot come close to matching Beijing’s financial firepower.

Mr. Matemulane runs a think tank called Afric, which describes itself on its website as “funded by donors with a common passion to foster Africa’s development,” without mentioning Russia. In an interview, though, Mr. Matemulane said the group was launched last year with support from a St. Petersburg businessman he declined to name.

Afric received prominent billing at a summit for dozens of African leaders hosted by President Vladimir V. Putin of Russia at the Black Sea resort of Sochi last week, and announced it would partner with a Russian propaganda specialist who had previously focused on the United States.

It also drew the notice of Mamadou Koulibaly, a candidate for president of Ivory Coast in elections next year.

“I will ask them if they can introduce me to people with money who will help me,” Mr. Koulibaly said of Afric. “This is important. A campaign needs money.”

Moscow has already injected itself into the geopolitics of Libya and the Central African Republic. Now it is looking for inroads in public opinion and the political elite across the continent.

Earlier this year, for example, Russia’s ambassador to Ghana met with Albert Kofi Owusu, the head of Ghana’s main news agency, and discussed a proposal: Might Mr. Owusu distribute stories from Tass, a Russian state-controlled news service, to newspapers, websites and television stations in the West African country?

“Very simple man, cool,” is how Mr. Owusu described Mr. Putin, who held a brief meeting at the conference with the heads of 11 African news agencies.

Russian officials at the conference said that the Kremlin’s RT and Sputnik would be glad to host African journalists in Moscow for training courses on topics such as social media.

“We understand that getting to Moscow costs quite a bit of money, and this may well be too expensive for African newsrooms,” Alexei Volin, Russia’s deputy minister for communications and mass media, added after making the pitch. “We are ready to consider possibilities for RT and Sputnik specialists to organize courses on the ground in this or that African country.”

Mr. Volin said RT was ready to provide its suite of documentaries to African TV stations. In addition to animal movies, the library includes features like “Drift It Like Putin’s Driver” and “Coups R Us: American Regime Changes and Their Aftermaths.”

Perhaps the most prominent figure in Russia’s Africa push is Yevgeny V. Prigozhin, the St. Petersburg businessman indicted by the United States for running the online “troll farm” that sought to sway the 2016 American presidential election, who is said to run a military contractor called Wagner that is involved in several African countries.

Another isKonstantin Malofeev, a nationalist banker under American sanctions who has cultivated ties with far-right politicians in Europe and the United States, as well as pro-Russian separatists in eastern Ukraine.

Mr. Prigozhin did not appear in public at the conference, but Mr. Malofeev had a stand right by the entrance showing off a new project: an agency promising to help African governments gain access to financing as an alternative to Western sources like the International Monetary Fund.

Mr. Malofeev described the new organization, called the International Agency for Sovereign Development, as an economic approach to the ideological battle he’s been fighting for a long time: breaking the Western world order. But it was the first time he’s ever been involved with Africa, Mr. Malofeev said. Niger, Guinea and the Democratic Republic of Congo have already signed on to have the agency help them raise a total of $2.5 billion, he said.

“I oppose liberal totalitarianism,” Mr. Malofeev said in an interview in the private meeting room at his stand, under a portrait of Mr. Putin. “I’m against the global dominance of the Federal Reserve System.”

Russia says the yearly volume of its trade with Africa has doubled to $20 billion over the last five years, but that still pales in comparison to Africa’s $300 billion in trade with the European Union and $60 billion with the United States in 2018.

In the West, Russia’s messaging has sought to appeal to people disenchanted by the political mainstream — from opponents of immigration and same-sex-marriage on the right to critics of capitalism on the left. In Africa, Russia is similarly trumpeting itself as a protector of “traditional values,” while also seeking to capitalize on Russia’s Cold War past, when the Soviet Union sought to ally itself with opponents of post-colonial influence on the continent.

“Our cooperation, rooted in the period of the joint fight against colonialism, is strategic and longstanding,” Mr. Putin told dozens of African leaders in Sochi gathered alongside him around a ring-shaped table.

Alexander Malkevich, a veteran of Russia’s propaganda wars, founded an English-language website called USAReally, which tells the story of a declining America caught in the throes of violence. Now, he says, he spends about one-third of his time on Africa. His Foundation for National Values Protection, with a website available in English and French, argues that African countries are vulnerable to the same sort of Western meddling that Russian officials say undermined former Soviet republics like Georgia and Ukraine.

“We try to do our work honestly and address our partners with respect, rather than from above, like the caricature of Uncle Sam,” Mr. Malkevich said.

Investigative journalists have reported that Afric and Mr. Malevich’s foundation are funded by Mr. Prigozhin, but Mr. Malkevich and Afric employees denied any connection.

Afric’s Mozambique-born president, Mr. Matemulane, said it was in fact a different St. Petersburg-based businessman who helped him launch Afric, but declined to identify him. In Sochi, Mr. Malkevich and Mr. Matemulane appeared on a panel together and signed a “cooperation agreement.”

“The Western system is broken,” said Clifton Ellis, who is British and Jamaican, and moved to St. Petersburg recently, where he helps coordinate Afric’s activities. “We have to fight the narrative that because Russia is involved, it’s bad.”

Afric — an acronym for Association for Free Research and International Cooperation — is building ties with African politicians and commentators while publishing articles that extol the benefits of cooperating with Russia. It has also invested heavily in election monitoring missions that mirror Russia’s approach in its own elections: bringing in sympathetic foreigners who praise the votes’ fairness and transparency, even as established Western organizations criticize them.

One of those, Volker Tschapke, the retired president of a small conservative German association called the Prussian Society, extolled Mr. Putin’s re-election vote in March of last year. Since the summer of 2018, Mr. Tschapke has made five separate trips to Africa on behalf of Afric to observe elections in Zimbabwe, Madagascar, the Democratic Republic of Congo, South Africa and Mozambique.

“It was unimaginably great. In all the countries I visited, I saw truly perfect elections,” said Mr. Tschapke, who acknowledges that he had no experience in election observation until last year. But he says the process is really so simple that “you just need a little instruction.”

He added in a telephone interview from Berlin that he had heard rumors that Afric had received Russian start-up funding, but said he had no problem with that.

Major elections loom next year across Africa, including in Ghana, Burkina Faso and Burundi. Mr. Koulibaly, the candidate in Ivory Coast presidential elections next October, said he had already met with a Russian deputy foreign minister, Mikhail Bogdanov, as well as with Russian agriculture and mining officials. He said he would talk about Russia in his campaign as a potential economic partner that, for instance, can help Ivory Coast harness nuclear technology.

African leaders have also taken notice of Russia’s expanded influence in the Middle East as a sign that Moscow is becoming a more formidable geopolitical player.

In an interview, Mahmoud Ali Youssouf, the foreign minister of Djibouti, ticked off countries that he said suffered as a result of misguided Western policies — Iraq, Afghanistan, Syria, Lebanon.

“Why shouldn’t we try a new approach? A new message?” Mr. Youssouf said. “Maybe Russia is the alternative.”