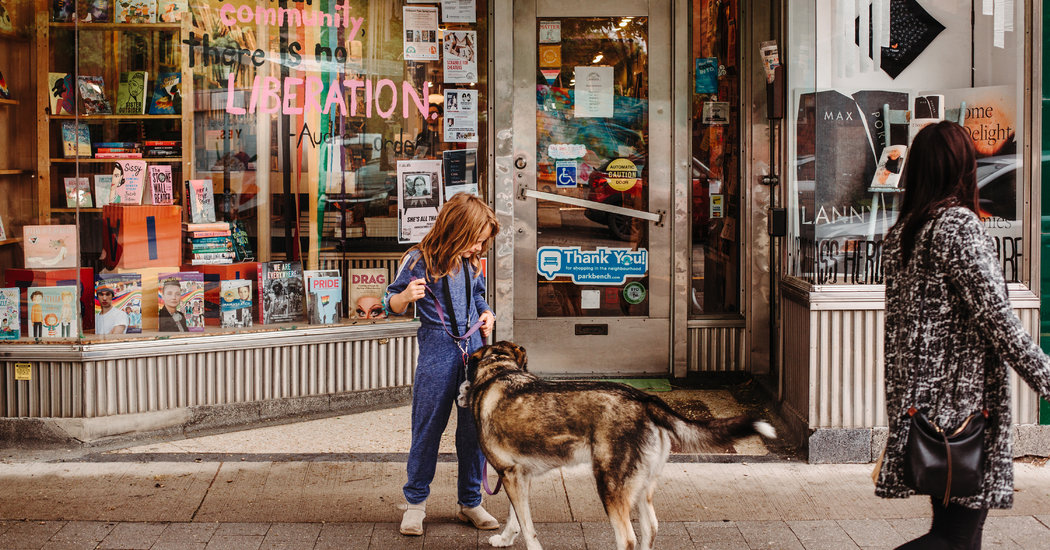 TORONTO — Before you walk inside Another Story Bookshop, you will see a poster featuring the John Lennon lyric “A Working Class Hero Is Something to Be” in the window. During a visit in the spring, the books on display included “Policing Indigenous Movements” and “Peaceful Fights for Equal Rights.”

The guiding principle of the bookstore, located in Toronto’s Roncesvalles Village neighborhood, is social justice, and it makes itself known right away. That was a goal of its founder, Sheila Koffman, who opened Another Story in 1987 in an effort to place, as she put it, “diverse books into diverse hands.”

“She wanted to give a platform for those voices,” said Eric McCall, a longtime employee, “to really champion new authors that were people of color and queer authors.”

The store was originally located in the basement of a building in Bloor and Broadview, and employees remember Koffman, who died of cancer two years ago, helping customers with children carry their strollers up and down the stairs.

Her brother, Joel Koffman, now owns the store with McCall and another employee, Laura Ash. Together with Anjula Gogia, who serves as the events coordinator, the four of them see themselves as continuing her legacy.

“‘Ownership’ doesn’t mean much to us, but the responsibility and workload does,” McCall said. “The work never really stops, so it just feels like a continuation of what our jobs were before in a lot of ways.”

Children’s books are a major draw, and half of the store is devoted to them. It also operates a wholesale business, supplying children’s titles to schools and libraries.

For adults, there is a mix of fiction and nonfiction, with a focus on Canadian authors, who represent about two-thirds of the selection. The owners also look for writers of color, queer authors and indigenous writers. “We don’t really worry about best sellers. That can be acquired elsewhere. We really want to promote those marginalized voices,” McCall said.

Readings and other bookstore events typically begin with “land acknowledgment,” identifying the indigenous people who lived there first. In Another Story’s case, that includes the nations of Huron-Wendat, Petun, the Haudenosaunee Confederacy and the Mississaugas of the Credit River. The Porcupine Warriors, a local indigenous collective, held a teach-in in January at the store to raise money for the Wet’suwet’en First Nation, whose members have fought the TransCanada pipeline expansion.

Because the owners also own the building, that has helped keep Another Story afloat amid Toronto’s increasingly expensive real-estate market. Sales and profits have grown steadily, Ash said, and all eight full-time and five part-time workers earn at least 15 Canadian dollars an hour (about $11.38), reflecting the store’s support for the “15andFairness” campaign to raise the national minimum wage to that rate.

That the bookstore has held onto its roots would have made its founder happy, McCall said.

“I still notice every time when a customer comes in who’s clearly never been here before. They look around for a minute and say out loud to whoever they are with, ‘Oh, it’s a lefty bookstore,’” McCall said. “Sheila would have liked that. We must be doing something right if people are still saying that.”