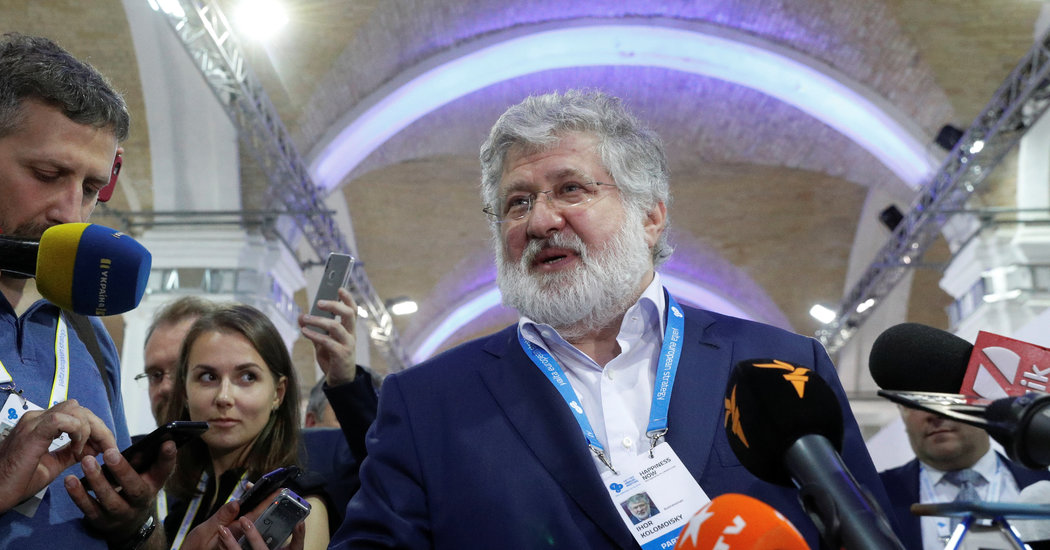 KIEV, Ukraine — In the last five years, more than 13,000 people have died in a de facto war between Ukraine and Russia — a fight, many here say, to shake off the shackles of a colonial master and to move closer to the West.

A crucial figure in the effort was a billionaire named Ihor Kolomoisky, who spent millions of dollars to field and equip fighters and helped stop the Russian advance in 2014.

But Mr. Kolomoisky, widely seen as Ukraine’s most powerful figure outside government, given his role as the patron of the recently elected President Volodymyr Zelensky, has experienced a remarkable change of heart: It is time, he said, for Ukraine to give up on the West and turn back toward Russia.

“They’re stronger anyway. We have to improve our relations,” he said, comparing Russia’s power to that of Ukraine. “People want peace, a good life, they don’t want to be at war. And you” — America — “are forcing us to be at war, and not even giving us the money for it.”

His comments appeared to reflect, at least in part, his self-interested frustration that Western diplomats and the International Monetary Fund have been leaning on the president to prevent Mr. Kolomoisky from regaining control of the bank seized from him and a co-owner in 2016 amid allegations of a multibillion-dollar embezzlement.

But whatever his motivations, Mr. Kolomoisky’s geopolitical views matter, because analysts and Western diplomats believe he has extensive sway with the administration of Mr. Zelensky, a comedian whose television shows were carried on Mr. Kolomoisky’s channel.

While Mr. Zelensky continues to pursue closer ties with the West, he also appears to be prepared to engage with Russia more directly than his predecessor. Mr. Zelensky recently offered to meet with Mr. Putin without Western leaders present, the former president of Kazakhstan said Tuesday.

In the impeachment hearings in recent weeks, American officials have described Mr. Kolomoisky’s influence as one of the biggest problems facing Mr. Zelensky’s new administration.

The I.M.F. is reportedly holding up financing for Ukraine in part because of concerns that Mr. Zelensky is not doing enough to recover funds that Mr. Kolomoisky is accused of stealing from his Ukrainian bank, Privatbank, which cost the government in Kiev $5.6 billion to bail out in 2016.

Mr. Kolomoisky, who denies any wrongdoing and says the government illegally seized his bank, has previously criticized the I.M.F. and what he sees as an excessively assertive Western role in Ukraine, insisting in an emotional interview — as he has in the past — that Mr. Zelensky should be prepared to default on the fund’s loans.

But he described the impeachment proceedings now gripping Washington as a last straw, and he spoke in blunt terms about the logic of embracing Russia as a partner. It has become clear that the European Union and NATO will never take in Ukraine, he said, so it would be best to accept reality and not even try.

“You all won’t take us” in the alliance, Mr. Kolomoisky said in the interview, in a conference room at his offices in Kiev. “There’s no use in wasting time on empty talk. Whereas Russia would love to bring us into a new Warsaw Pact.”

Five years ago, Mr. Kolomoisky, now 56, had a far different perspective. With Ukraine under attack from Russian-backed separatists, the billionaire accepted an offer to become governor of his home Dnipropetrovsk region near the war’s front line. He financed a pro-government militia that held the battle lines before the regular army could deploy enough troops to keep the separatists at bay.

As a fixture in Ukraine’s Jewish community, he countered the notion advanced by the Kremlin that the new pro-Western government in Kiev was run by neo-Nazis.

In 2017, Mr. Kolomoisky left Ukraine for Switzerland and Israel after the government under then-President Petro O. Poroshenko seized Privatbank and accused him of a large-scale fraud that threatened to destabilize Ukraine’s economy. He returned this past May after the election of Mr. Zelensky, the comedian whose hit sitcom about a good-at-heart teacher turned president of Ukraine appeared on Mr. Kolomoisky’s television channel.

Mr. Kolomoisky now insists he still has no love lost for Russia, mentioning the mass famine in the 1930s as one of the tragedies that befell Ukraine because of its association with Moscow. But, he told The Times in a profanity-laced discussion, the West has failed Ukraine, not providing enough money or sufficiently opening its markets.

Instead, he said, the United States is simply using Ukraine to try to weaken its geopolitical rival. “War against Russia,” he said, “to the last Ukrainian.” Rebuilding ties with Russia has become necessary for Ukraine’s economic survival, Mr. Kolomoisky argued. He predicted that the trauma of war will pass.

“Give it five, 10 years, and the blood will be forgotten,” Mr. Kolomoisky said. “I showed in 2014 that I don’t want to be with Russia,” he added. “I’m describing, objectively, what I’m seeing and where things are heading.”

He said financing from Russia could replace loans from the I.M.F., which has pushed for anticorruption reforms that annoy Ukraine’s entrenched business interests.

“We’ll take $100 billion from the Russians. I think they’d love to give it to us today,” Mr. Kolomoisky said. “What’s the fastest way to resolve issues and restore the relationship? Only money.”

For Mr. Kolomoisky, the enmity toward the United States is personal. He says he believes he is a target of the F.B.I., which is reported to have started a financial-crimes probe into his activities.

Fiona Hill, the former Europe and Russia adviser at the White House, told lawmakers that she was “extremely concerned” by Mr. Kolomoisky’s influence with Mr. Zelensky. George D. Kent, a senior State Department official, said he had told Mr. Zelensky that his willingness to break with Mr. Kolomoisky — “somebody who had such a bad reputation” — would be a litmus test for his independence.

And William Taylor, the acting ambassador in Kiev, said he had warned Mr. Zelensky: “He, Mr. Kolomoisky, is increasing his influence in your government, which could cause you to fail.”

Mr. Kolomoisky said that if he were Ukraine’s president, he would proceed with the investigations sought by Mr. Trump. Asked if that risked exposing Ukraine to blowback if a Democrat were to win next year’s presidential election, Mr. Kolomoisky responded: “If they get smart with us, we’ll go to Russia.”

“Russian tanks will be stationed near Krakow and Warsaw,” he said. “Your NATO will be soiling its pants and buying Pampers.”

Mr. Zelensky campaigned on an anticorruption platform, pledging to rid Ukraine of the influence of the business tycoons who seized control of the country’s key assets after the breakup of the Soviet Union. He pledged that Mr. Kolomoisky would have no special sway over his administration.

But there are mounting signs that Mr. Kolomoisky’s influence is rising, and the oligarch’s comments about the importance of rebuilding ties with Russia are likely to increase concern among critics of Mr. Zelensky who already believe that the president is prepared to undermine Ukrainian interests in his pursuit of a Kremlin peace deal.

Mr. Kolomoisky said he was feverishly working out how to end the war, but he refused to divulge details because the Americans “will mess it up and get in the way.”

Mr. Kolomoisky said he remains intent on regaining ownership of Privatbank or being compensated. He said those like Mr. Poroshenko responsible for the bank’s seizure must be punished, “and the death penalty must be brought back for them.”

With international investors jittery over Mr. Kolomoisky’s role, Mr. Zelensky has insisted publicly that he will not return the bank to its former owners.

“He knows it wasn’t stolen,” Mr. Kolomoisky countered, referring to the money Mr. Kolomoisky and his partner were accused of embezzling from the bank, which both deny. “He’s saying what you all want to hear.”

Mr. Kolomoisky rejected the reports about his hidden influence on Mr. Zelensky’s government. But he warned that he was starting to believe that depiction of himself, and that he had the ability to make it come to life.

“If I put on glasses and look at myself like the whole rest of the world, I see myself as a monster, as a puppet master, as the master of Zelensky, someone making apocalyptic plans,” Mr. Kolomoisky said. “I can start making this real.”