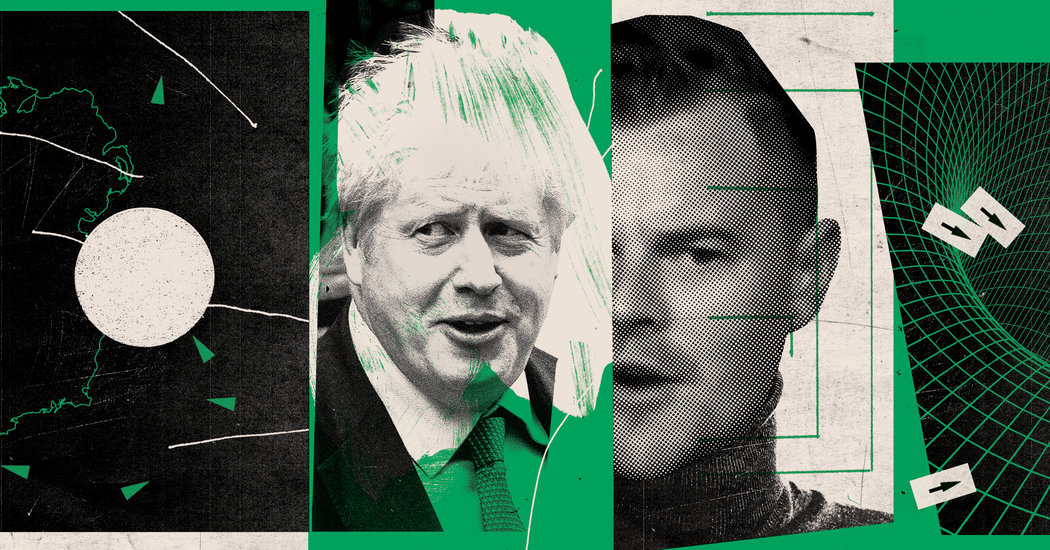 The premise of “Question Time,” the weekly BBC political discussion show, is simple: A panel of guests fields questions from the audience on matters of the day, responding mostly with circular nonanswers and unchecked bluster until other panelists break in and they all speak over one another, on repeat, for an hour. The panel typically comprises three politicians and two miscellaneous media figures, but the true stars are often in the audience. This was certainly true of the recent episode in which the world was introduced to Turtleneck Man.

Turtleneck Man was a youngish audience member whose lantern jaw and realtor’s haircut were complemented by a charcoal turtleneck and one of the most remarkable “Question Time” questions in a while. He began with a defense of Prime Minister Boris Johnson and his Brexit negotiations, despite the fact that they had not yet resolved complications like how a Northern Ireland that wasn’t part of the European Union could maintain an open border with a Republic of Ireland that was. And then, with a nonchalance that suggested he had hit upon a solution so far elusive to everyone else, Turtleneck Man offered the following: “Why doesn’t it, you know, this is going to sound crazy, but Ireland being referred to as Ireland — the island of Ireland — why don’t we try and just get that as an island again. And then we can carry on with our own thing.”

Video of this moment went viral for several reasons, some particular to the British Isles, others equally relevant to the state of politics in America. The eagle-eyed viewer will note that, while expressing vague warm wishes for Ireland, this man doesn’t appear to know, either politically or geographically, what it actually is. This complacency has shades of Haines, the English boarder in James Joyce’s “Ulysses,” who confesses to an Irishman that “we feel in England that we have treated you rather unfairly. It seems history is to blame.” A certain type of Brit isn’t very interested in what that “history” actually involves; what matters is to get past it. In this case, that means getting on with Brexit, even if it destroys the very union to which Brexit is supposed to be a boon. Thus does this man deliver his invocation of a united Ireland — a cornerstone of Irish, and British, politics for the past hundred years, the crux of bloody conflict during his own childhood — as if he has, just that second, birthed the notion into the world himself.

There is a temptation to focus on Turtleneck Man as a person: his tilted head, his wry smile, his chirpy obliviousness to the loud booing that envelops his final sentiments. Here is the platonic ideal of cheerful entitlement, the holotype of every guy who has ever raised a hand in class to proffer “more of a comment than a question.” But it’s more apt to regard him as a symptom of a deeper trend within both British and American conservatism.

For the United Kingdom, it’s the pursuit of a nebulous thing called Brexit that has acted like a black hole, sucking every other thought from its proponents’ heads, prompting a creaking, data-allergic lean away from every value they once claimed to cherish. What is most astonishing about Turtleneck Man’s attitude toward Northern Ireland is that it is no longer controversial. It’s hard to think of a more abiding value of the Conservative Party than preserving the union of Britain and Northern Ireland — its full name is literally the Conservative and Unionist Party — and yet in June, one poll reported that 59 percent of party members would happily lose Northern Ireland if it meant securing Brexit, while 63 percent would say goodbye to Scotland. This represents less an evolving pragmatism and more a complete dereliction of founding principles. All in pursuit of a Brexit that the party’s leaders campaigned against in 2016.

Turtleneck Man is, however, less a product of place than of time. In 2019, his attitude thrives on both sides of the Atlantic. The American conservative establishment initially balked at Donald Trump, too, before creeping to his defense — jettisoning, along the way, every moral precept held within their movement. Now we see Washington hawks asking if it’s really so terrible if a few ISIS sympathizers escape captivity and recreant evangelists arguing that it’s of no concern whether Trump has paid to hide affairs with adult-film stars.

As much as we Irish recreationally hate on Britain, scratch some hidden part of our psyche and you might find a grudging, silent sense that the British were, if nothing else, outwardly consistent and slow to lose face. Similarly, the office of the president, for all its foreign escapades and repressive actions, still seemed to hold some nugget of Sorkinesque dignity or moral traction, even if just for show. Now, in Washington as in Westminster, all such pretense has been abandoned. It’s taken for granted that the moral and philosophical rubrics of conservatism can be shed in pursuit of the basest immediate goals.

Unfortunately, not all immediate goals are created equal. Brexit requires unbraiding a centuries-deep history of entanglements, causing major disruption to the country as a whole and Northern Ireland in particular. Statesmen of a more sober age might urge the public to consider these threats to the common order. The British government prefers to insist that there would be nothing complex about Brexit if only the E.U. and Ireland would get out of the way. Like a toddler struggling with object permanence, the U.K. acts as if other countries exist only when it chooses to look at them. Its foreign policy is gripped by the fatal colonial delusion that when the people of other nations lay down their heads each night, it is the thought of England’s happiness that sends them pleasantly to sleep.

All of which means that for many, Turtleneck Man is something more specific still: a dictionary-perfect case of “tansplaining,” a neologism the Twitter user @bigmonsterlove used to describe the phenomenon in which Irish people suffer inept lessons in their own history from British people. Tansplainers often suggest remedies to stubborn “Irish problems” without any awareness that the British were not just present for those issues’ institution but largely culpable for them. The “tan” in “tansplaining” derives from “black and tans,” the British paramilitary force formed to suppress Irish independence in the 1920s; a century later, it’s a term every Irish person understands, but it is likely to draw blank stares from our British cousins, some of whom seem incapable of remembering a single thing that occurred before the Brexit referendum of 2016.

It is not reasonable, or even desirable, to demand that every person becomes a diligent historian. Joyce himself had an uneasy sense of the past: “History,” his “Ulysses” surrogate Stephen Dedalus complained, “is a nightmare from which I am trying to awake.” To arise from the shadow of the past is an admirable notion, but you wonder if the British, turtlenecks or no, should try to remember their nightmares a little more clearly.