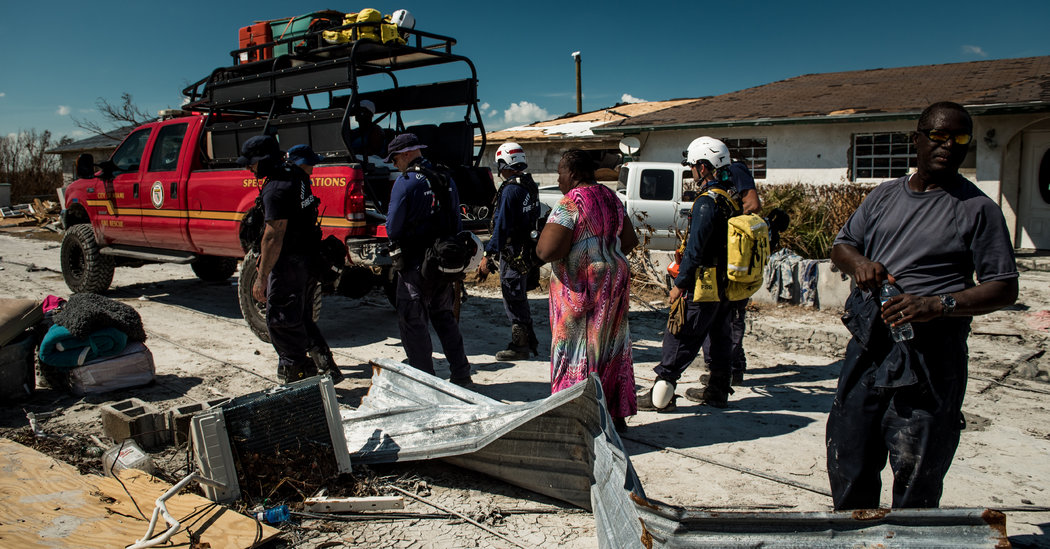 NASSAU, Bahamas — About 2,500 people have been reported missing in the Bahamas in the wake of Hurricane Dorian, but the names have yet to be checked against those who evacuated or sought shelter, the government said Wednesday.

The number of confirmed dead from the storm remained at 50 on Wednesday, a figure that government officials say is certain to rise. The Bahamas Defense Forces began posting pictures on social media this week of soldiers in hazardous material suits collecting muddied corpses and dropping them into pickup trucks.

“No living Bahamian has ever seen anything like this in their lifetime,” Prime Minister Hubert Minnis said in a televised address Wednesday night, “but as horrible and vicious as Hurricane Dorian was, the bravery and resilience of the Bahamian people is even more powerful.”

Still, Mr. Minnis acknowledged public frustration with recovery efforts, and said his government was “aggressively shredding the red tape” to improve its response.

Its efforts to quantify the number of missing have been hampered by the many directions in which people fled. Some 2,048 people are in government-run shelters in Nassau. At least 4,000 Bahamians had left the islands and entered the United States by Monday, American immigration authorities said.

A database with the names of the missing, those sheltered and those who evacuated is being built to make for more effective crosschecking, said Carl Smith, a spokesman for the Bahamian National Emergency Management Agency.

“As we are able to cross-reference our data sets, we will be able to inform family members and reunite survivors with loved ones,” Mr. Smith said.

McAdrian Farrington, whose 5-year-old son and namesake went missing after a storm surge at his Murphy Town home in the Abacos Islands, said he feared that authorities would never find all of the missing.

“There’s a lot of people missing, not just my son,” he said in an interview last week.

He did not criticize the government for its efforts, but said he believed it was too big a job for the Bahamas.

“You can’t just be looking in Abaco,” he said. “They’ve got to get boats and check the water. Get to the ocean.”

Government officials also had a fresh eye on an oil spill on the eastern end of Grand Bahama. Last week, a Norwegian oil company, Equinor, said that Dorian had blown the tops off several storage tanks on Grand Bahama and that oil had seeped out on site.

But on Wednesday the company disclosed that oil had been spotted in open waters and along the coast some 50 miles north of its hurricane-damaged terminal. It said it was investigating the origin of that oil.

Equinor was also determining the extent of the spill, said Erik Haaland, a spokesman. “We now have 76 people at the site ensuring the safety and responding to the spill,” he said. “Additional resources are en route.”

The company disclosed the oil sighting near the bottom of a news release highlighting its $1 million donation to hurricane relief efforts.

Joseph Darville, an environmental activist with a group called Save the Bays, visited the spill on Tuesday and said he was alarmed to find oil about a mile and a half from the company’s storage terminal. The facility appeared to have been stained with oil that, with the storm surge, had reached 30 feet high, he said.

“We are expecting another powerful storm — tons and tons of rain,” said Mr. Darville. “All of this going to be washed into the water table.”

Carl Bethel, the attorney general, told reporters that the company had taken too long to respond to the spill.

“We think that it’s been a little too much of a delay,” he told The Nassau Guardian. “We would appreciate some speedy action on that issue, and anything else after that we’ll figure it out.”

Equinor said it had hired two crews from Louisiana to begin containment. One arrived Tuesday night and the second was scheduled to arrive Thursday, the company said. Another 225 Equinor employees are involved in the response, it said.

The Bahamian minister of the environment, Romauld Ferreira, said the government would take care of the spill once the top priority — taking care of its people — was secured.

“After lives have been settled and restored,” he said, “we need the environment to be restored.”