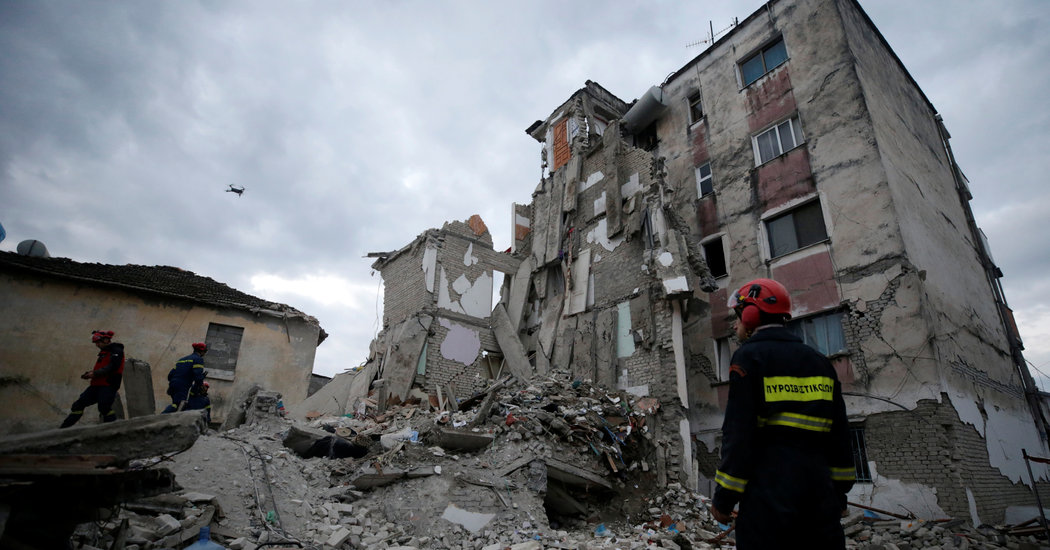 Scores of residents in Albania’s second-largest city woke up in tents, cars and a soccer stadium on Wednesday, as rescue teams continued to search for survivors amid the rubble of buildings destroyed by the strongest earthquake to hit the country in decades.

At least 24 people died and hundreds more were injured in the 6.4-magnitude quake that struck in the early hours of Tuesday. Hundreds of buildings collapsed or broke apart, trapping people inside.

The country’s second-largest city, Durres, on the Adriatic coast, is close to where the quake and a swarm of aftershocks were centered, and it was hit particularly hard. Residents whose homes were destroyed or damaged spent the night outside, covered in blankets and sitting on mattresses, as workers from the Red Cross distributed food and army officers set up white tents.

“We were afraid that there would be another earthquake so we decided, with our family, to spend the night outside with many people, other people in the town,” Nuredin Pronjani, an employee at Vila Verde Hotel, told The Associated Press.

There was no indication on Wednesday as to how many people might still be buried in the rubble. Firefighters and emergency search teams kept searching, a day after they pulled dozens of survivors from the rubble, sometimes in harrowing rescue missions that took hours.

Xhuliano Palku, the manager of the seven-story hotel Vila Palma in Durres, said that for 20 hours, he had participated in a risky operation to rescue the son of the hotel’s owner, who had been sleeping on the third floor and who had been trapped under the debris.

Mr. Palku said that the hotel owner’s son was in his mid-20s and had been taken to a hospital after he had been pulled from the rubble.

The three-star Vila Palma was one of the many buildings in the city to collapse, and among the four people who had been sleeping there, Mr. Palku said, one had been found dead.

“It was a mess, it was a total mess,” Mr. Palku said of the building, which crushed cars that were parked beneath it.

“When I see the hotel, I think it’s a miracle,” Mr. Palku said. “I didn’t think someone could survive in that catastrophic scene.”

Various countries, including Italy, Montenegro and Serbia, sent rescue teams to Durres and to other cities after Albania, one of Europe’s poorest countries, requested international assistance. The Greek foreign minister, Nikos Dendias, visited the seaside city, as 40 Greek emergency workers and a sniffer dog joined the search and rescue effort, according to news reports.

Albania sits in a seismic region known for devastating tremors. Durres was struck by another strong quake in September, which injured dozens of people and damaged hundreds of homes.

On Tuesday, a 5.4-magnitude quake struck Bosnia and Herzegovina, just hours after the quake in Albania. On Wednesday, an undersea quake whose preliminary magnitude was estimated at 6.0 by the United States Geological Survey, rattled the Greek island of Crete and was felt in the southern mainland. There were no initial reports of damage or injury.

“We too have been through this,” Mr. Dendias told reporters in Durres. “And we are standing by Albanian people and its government, to offer every help we can.”