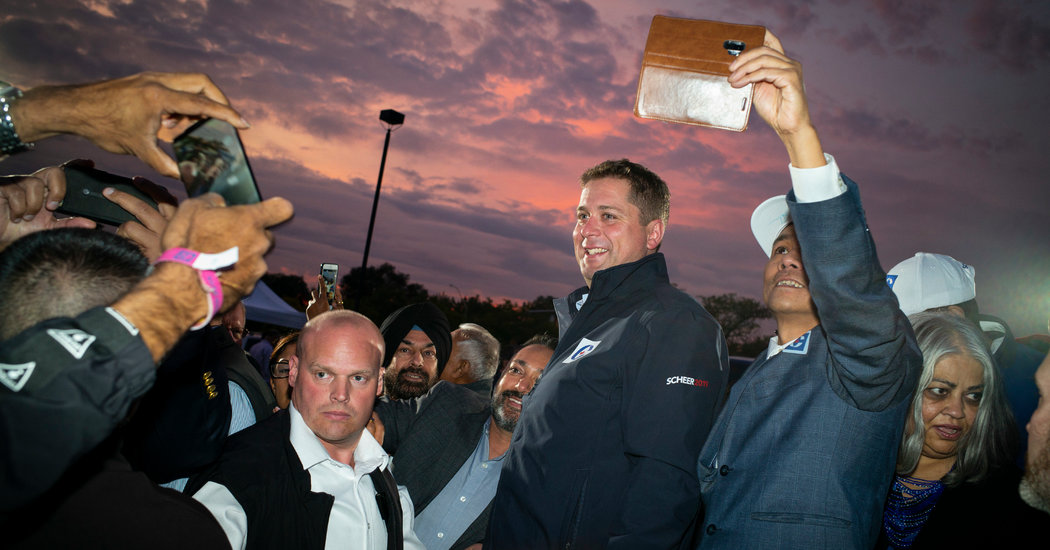 BRAMPTON, Ontario — Canada’s Conservative Party leader arrived in his campaign bus for a rally in the Toronto suburb of Brampton as a sparse crowd of about 150 milled about the venue, a largely empty parking lot.

Party workers gently herded the spectators toward a small stage in a bid to make the meager turnout for the leader, Andrew Scheer, appear larger for cameras. Afterward, many of them swarmed the small stage to pose for selfies with Mr. Scheer, the only politician who has a realistic chance of toppling Prime Minister Justin Trudeau in the country’s Oct. 21 election.

“He was slow off the mark getting started, getting his message out there. But I think it’s coming across pretty good now,” said John Sanderson, a former municipal councilor, while campaign workers began dismantling the tents, lights and speakers. “He’s obviously becoming more confident and, you know what, I think he’s got a good shot.”

Midway through Canada’s six-week election period, Mr. Scheer is polling neck-and-neck with Mr. Trudeau, but the incumbent is clearly ahead in one respect: drawing crowds. Mr. Trudeau attracted more than 950 at a rally in Surrey, British Columbia, a week earlier.

Crowd size may not matter, but the turnouts at Mr. Scheer’s rallies may signal that he is struggling to attract voters outside of the Conservative party’s core, a leap that would be crucial to his securing a victory on Oct. 21.

Even as Mr. Trudeau has been tarnished this year by two scandals — for violating Canadian ethics laws and for dressing in racist caricatures — Mr. Scheer has struggled to generate enthusiasm beyond his base and build name recognition for himself.

“The Conservatives have largely failed to capitalize on the chance that was given them,” said Shachi Kurl, the executive director of the Angus Reid Institute, a nonprofit polling group. “Canadians still don’t know who Andrew Scheer is or whether they feel comfortable with him.”

Mr. Scheer, 40, a Roman Catholic, is a deeply conservative politician in a country that permits abortion and was one of the first in the world to legalize same-sex marriage. He is also against Canada’s carbon tax, a climate-change policy popular with Canadians.

“They are raising taxes, they are borrowing more money, and life will get more expensive if Justin Trudeau gets re-elected — we know that,” Mr. Scheer said to some agreeing murmurs during his Brampton rally.

His platform gives him a solid base of support among Conservatives, a group concentrated largely in Canada’s Prairie Provinces, where he lives, and in rural areas throughout much of the rest of the country. Donations from those loyalists, in turn, have given the Conservatives a significant lead in fund-raising.

His platform could also appeal to voters in multiethnic Toronto suburbs like Brampton, home to many swing and undecided voters.

And despite Canada’s global reputation under Mr. Trudeau as a beacon of liberalism, the Conservatives had led the government for nearly a decade before the Liberals took power four years ago.

Still, Mr. Scheer may have to persuade swing voters that he won’t impose his social conservatism on the country. And here in vote-rich Ontario, Mr. Scheer must counter growing suspicions that he would follow the lead of the province’s Conservative government in making sweeping cuts to services.

He must also address concerns that he failed to disclose his dual United States citizenship before a Toronto newspaper revealed it on Thursday.

“Andrew Scheer has been fundamentally dishonest with Canadians about who he is,” Zita Astravas, a spokeswoman for the Liberal Party, said in a statement. “Over a million Canadians hold dual citizenship — it’s part of what makes Canada great,” she added. “But none have hidden that fact when running to be prime minister.”

Mr. Scheer is casting himself as an Everyman in contrast to what he calls Mr. Trudeau’s life as a member of the privileged elite. Whereas Mr. Trudeau is the grandson of a lawyer who made a fortune creating a chain of gas stations, the 40-year-old Mr. Scheer was raised in a townhouse by a family who didn’t own a car, although that lifestyle appeared to be the product of his family’s frugality.

Mr. Scheer has been earning a living in politics for about 20 years, and was first elected to Parliament when he was 25. Aside from a few months working in an insurance office and an even shorter spell as a waiter, his work experience has been entirely political.

Mr. Scheer began volunteering in politics when he was a teenager, helping out in the Ottawa offices of the Reform Party of Canada, a splinter right-wing group that merged with the Conservative Party.

He got his first job in politics in 2000, working as an aide to Deborah Grey, the first Reform member elected to Parliament. Later he moved to Saskatchewan, the home province of his wife, Jill, where he became an assistant to a member of Parliament. In 2003, that member condemned the country’s legalization of homosexuality, a move made decades before, and was thrown out of the party.

After Mr. Scheer was elected to Parliament in 2004, he spoke out in the House of Commons against same-sex marriage, arguing that it is no more a marriage than a dog’s tail is his leg.

During the campaign, the Liberals have repeatedly raised questions about how Mr. Scheer’s religious beliefs would affect his decisions as prime minister. In September, they resurfaced a video on social media of the Conservative leader’s 14-year-old same-sex marriage speech.

Mr. Scheer says he still opposes abortion and, unlike the leaders of other parties, he has never attended a gay pride parade. But he maintains that a Conservative government will not reopen debate on same-sex marriage or abortion.

Mr. Scheer’s path to becoming the leader of the Conservative Party has been unlikely. When Stephen Harper quit politics after his defeat in 2015, Mr. Scheer was far being from the front-runner to replace him. It took 13 rounds of counting ballots in which members ranked the candidates for Mr. Scheer to narrowly emerge as the winner.

“He won by picking up everyone’s second, third and fourth choices,” said Jim Farney, a professor of political science at the University of Regina in Saskatchewan. “He’s affable, he’s bright but he’s not an inspiring campaigner. He doesn’t always seem comfortable with himself.”

Instead of a broad carbon tax, Mr. Scheer would impose an unspecified fee on big corporations that spew unusually large amounts of carbon. The money would be used to fund research into carbon emission reduction technologies, a plan that environmental groups and experts disparage and that puzzles some political analysts.

Mr. Scheer’s proposal to cut taxes also may not resonate here in Brampton and in other Toronto suburbs, where many voters are upset that the Conservative government that Ontario elected in 2018 cut a wide variety of popular government services.

The man who pushed most for those cuts — Doug Ford, the leader of Ontario’s Conservative Party — has become uncharacteristically silent during Mr. Scheer’s campaign, as if to deflect attention from himself.

“At the beginning of the campaign it was it was pretty cold no matter where you went,” he said. “Now there’s a bit of warmth.”