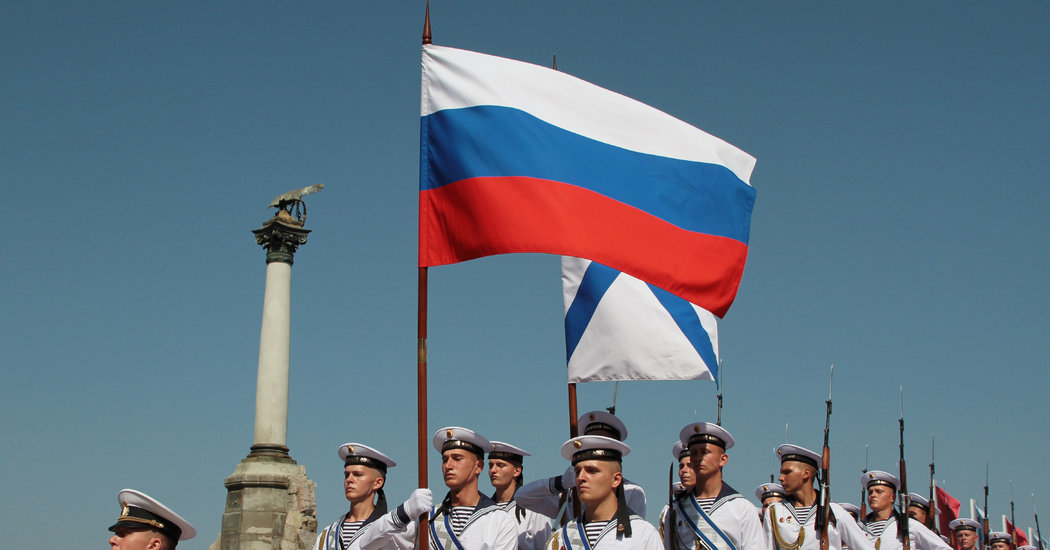 MOSCOW — Since it grabbed Crimea from Ukraine five years ago, Russia has made no headway in getting the United States or the European Union to recognize the annexed Black Sea peninsula as Russian.

But Russia’s Parliament is now rejoicing at getting at least Apple to fall partly into line. When viewed from inside Russia, Apple apps show Crimea as part of the Russian Federation and separated from Ukraine by an international border.

This means that Apple has joined Google, Yandex and some other technology companies in redrawing Ukraine’s borders to satisfy Moscow’s territorial claims, at least for customers viewing their maps on devices inside Russia. Viewed on devices outside Russia, Crimea remains part of Ukraine.

Unlike printed maps, online cartography can shift, providing alternative realities to comfort the likely political leanings of the viewer and the policies of his or her government. This means that borders over which armies and diplomats have battled for centuries are no longer entirely static but often follow a course that exists only in the eye of the beholder.

“Our situation with Apple has now been resolved,” Vasily Piskaryov, the chairman of the security and anticorruption committee of the State Duma, Russia’s lower house of Parliament, said on Wednesday. “We see that everything has happened the way we wanted it.”

Mr. Piskaryov told the Interfax news agency that his committee would continue to monitor Apple apps to ensure “there is no going back” to previous maps that showed Crimea as part of Ukraine or as a territory belonging to neither Russia nor Ukraine.

Leonid Levin, the head of the Duma’s Information Policy Committee, told the news agency that Apple “has demonstrated a wish to preserve and develop its position on the Russia market.” He added that the company’s decision “to bring the state of its cartographic services into compliance with the requirements of the legislation of Russia can only be welcomed.”

Ukraine protested Apple’s cave-in to Russia, with its foreign minister, Vadym Prystaiko, writing on Twitter that the company should “stick to high-tech and entertainment” and stay out of politics. “Global politics is not your strong side,” he said.

The Ukrainian Embassy in Washington also voiced dismay that Apple had accepted Russian claims. In a post on Twitter, the embassy said that occupation did not confer sovereignty and noted that Ukrainians were “not giving any thanks to @Apple this #Thanksgiving.”

The United States and the European Union imposed sanctions on Russia over its seizure of Crimea, and both still view the peninsula as part of Ukraine.

Crimea is mainly Russian-speaking and inhabited mostly by ethnic Russians, but it was recognized by Moscow — and all other capitals — as belonging to Ukraine until Russia changed its mind in 2014.

After sending “little green men” — Russian special forces in uniforms stripped of identifying insignia — to seize Crimean government buildings, it held a referendum that endorsed the change. Russia hailed the vote as an act of democracy, but the West viewed it as window-dressing for an unacceptable military aggression.

Apple had been negotiating with Duma representatives since May over what the Russian Parliament had denounced as its “inaccurate” maps of Crimea. Apple did not respond to requests for comment on the Crimea decision.

Ukraine has struggled, with considerable success, since the 2014 annexation of Crimea to prevent the appearance of maps in foreign print publication that suggest the peninsula belongs to Russia. But it has had far less success online, where frontiers often change depending on where they are being viewed from.

And Russia is not the only country that has raised such a fuss over cartography. China has for years waged much the same battle over Taiwan, insisting that the self-governing island be shown as part of the People’s Republic of China.

A growing number of American companies have in recent months tried to appease Beijing by recognizing its claims over Taiwan. Last year, the clothing retailer Gap issued an apology to China after a map on a T-shirt sold in North America did not depict Taiwan as part of China.

China has also been successful in getting Apple to tailor the iPhone ecosystem to suit Beijing’s demands. Apple regularly removes apps that run afoul of Chinese laws. These sometimes include apps that connect users to gambling or pornography, but also include the apps of foreign news outlets like The New York Times and even Apple’s own news app. Apple has also removed apps that would let users leapfrog the country’s censorship controls.

Tim Cook, Apple’s chief executive, said at a conference two years ago that he disagreed with some Chinese policies but that Apple must comply with the law wherever it operates.

“Each country in the world decides their laws and their regulations, and so your choice is: Do you participate? Or do you stand on the sideline and yell at how things should be?” he said. “You get in the arena, because nothing ever changes from the sideline.”