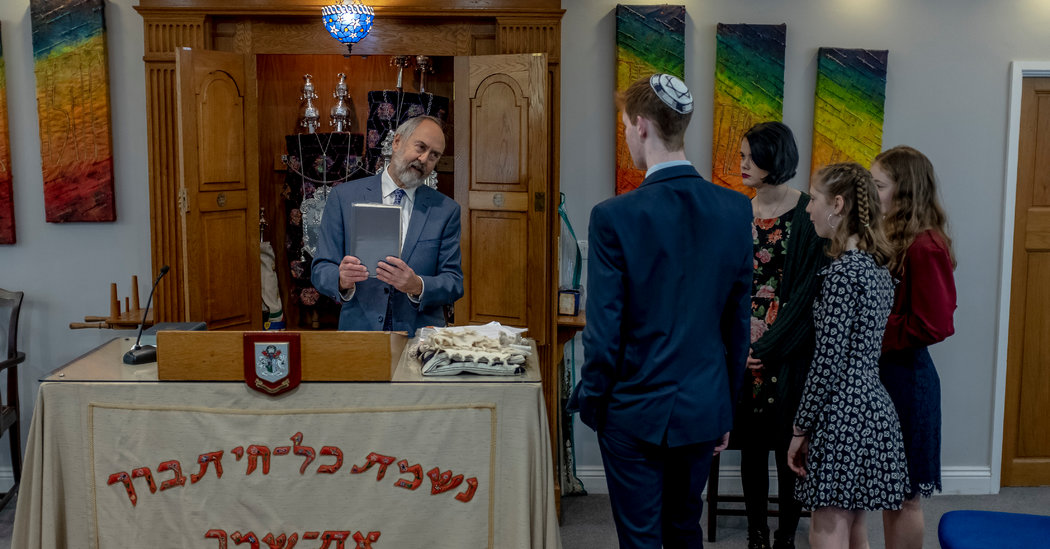 LONDON — At a synagogue west of London, a rabbi made an astonishing plea: vote against the Labour Party in the coming general election, he urged his congregants, because its leader, Jeremy Corbyn, poses “a danger to Jewish life as we know it.”

On the second day of Rosh Hashana in north London, another rabbi warned of the opposite: that browbeating Jews into opposing Labour because of anti-Semitism “can only stoke people’s fears, increase people’s anxieties.”

And on the eve of a recent Shabbat at Alyth, another north London congregation, a rabbi closed his sermon by marveling at how Jews, once just a small constituency, had suddenly become “a talking point” in this race.

As Britain prepares for its most seismic election in decades, one that will decide its relationship to Europe and place in the world, few voters face such an anguished choice as the country’s 300,000 Jews. With anti-Semitism surging in Europe and the United States, the debate over how to vote in Britain’s election has already rattled rabbinical conventions, strained friendships and started a war of letters in the left-wing press, as many Jews wrestle with nerve-racking options.

They overwhelmingly oppose Brexit, the main plank of Prime Minister Boris Johnson’s campaign, dreading an emboldened far right and the splintering of a European project at the root of post-World War II peace.

But they also flinch at handing power to Mr. Corbyn, seen by many as the only person who can stop Brexit, pained as they are by an avalanche of anti-Semitism accusations against the party.

“I feel quite torn,” said Keith Kahn-Harris, a sociologist and writer who attends Alyth. “The issue in the Jewish community at the moment is anti-Semitism is something you can’t hold your nose for, the one thing you can’t overlook, which I understand. But for me, there are multiple things I can’t overlook, and it’s very difficult to know how to balance them.”

The quandary has consequences far beyond the .5 percent of Britons who are Jewish. Labour’s hopes of unseating Mr. Johnson hang on its appeal as the gentler and more upstanding of Britain’s main parties, a case that Mr. Corbyn made to great effect in the 2017 election and that should have been bolstered by Mr. Johnson’s hardball tactics as prime minister.

But the anti-Semitism scandal is “gravely damaging Labour’s reputation as the nice party, or at least putting a dampener on the concept that they’re the good guys,” said Glen O’Hara, a historian at Oxford Brookes University. And it has frustrated voters already dubious of Mr. Corbyn’s anti-Brexit bona fides.

Rabbis used to joke that when young Jews became a bar or bat mitzvah, tradition held that they be given lifelong membership in the Labour Party. But no longer. Many Jews now feel sharply at odds with Labour, and politically homeless in Britain.

A number of Labour lawmakers have quit the party over the issue since February. The Jewish Labour Movement, a 100-year-old socialist group, decided not to campaign nationally for Labour for the first time in its history. And the Jewish Chronicle, Britain’s most influential Jewish newspaper, ran a front-page editorial beseeching non-Jews to heed the paper’s fears of a Corbyn government.

But some British Jews are wary of seeing the cause weaponized in the heat of an election. Distrustful of Mr. Johnson’s own record of racist and Islamophobic remarks, and fearful of far-right violence against Jews in the United States, they are trying to persuade people to consider how a Johnson government could hurt not only Jews but other vulnerable groups.

“Undeniably, the vast majority of British Jews recognize there’s a problem with anti-Semitism in the Labour Party, and it’s been really painful,” said Tommer Spence, who recently helped start a group called Jews Against Boris. “We strongly feel that the response to that is not to turn to a leader who is willing to engage in far-right rhetoric, appeal to nationalist instincts and throw other minorities under the bus, because it could be us next. None of us are safe while he’s doing that.”

Labour said in a statement that it was “taking robust action to root out anti-Semitism” in the party, accelerating its response to complaints.

“Jeremy Corbyn is a lifelong campaigner against anti-Semitism and other forms of racism, hatred and bigotry,” a party spokeswoman said. “He has made it absolutely clear that anti-Semitism has no place in our Party or in society.”

But British Jews, some of whom were already drifting rightward in recent decades, have accelerated their retreat from Labour since Mr. Corbyn emerged from the hard-left hinterlands of the party to become leader in 2015.

An ardent anticapitalist and anti-imperialist, Mr. Corbyn once defended a mural featuring grotesque caricatures of hooknosed Jewish bankers. He accused longtime Britons who were Zionists of failing to “understand English irony.” And several whistle-blowers have accused Corbyn allies of interfering in the party’s anti-Semitism complaints process.

Labour is now under investigation by Britain’s Equalities and Human Rights Commission.

In recent weeks, one Labour candidate quit after being accused of calling a Jewish colleague “Shylock,” a reference to the moneylender in Shakespeare’s “The Merchant of Venice,” and another left the race after revelations that she compared Israel to “an abused child who grows up to become an abusive adult.”

Some Jews are imploring friends and relatives to vote Labour to stop Brexit, whatever their qualms. They point to the Conservatives’ own record on anti-Semitism: this week one parliamentary candidate was suspended after he was found to have said parts of Holocaust history were “fabricated,” and another was suspended for saying British Jews returned from Israel “brainwashed” and “extremists.”

But many others chafe at Labour’s attempts to deflect criticism, and say arguing that the stakes are too high to send the party a message on anti-Semitism belittles a core moral obligation. Far from one of a cluster of issues to consider, anti-Semitism exists in its own category, they say, with the power to determine whether Jews have a place in modern Britain.

The issue is particularly vexing for younger voters, who make up Mr. Corbyn’s core vote.

“There really is no good option for us as young Jewish people,” said Hannah Rose, a student who worked for one of the lawmakers who quit Labour. “It shouldn’t be up to marginalized groups to have to stand up again and again to try to convince people they’re telling the truth. Where’s the solidarity? Does it apply to Jewish people? Where’s our comradeship?”

The exodus of Labour lawmakers this year has extinguished some Jews’ hope that the party could change. But with political allegiances shifting on all sides, Labour stands a chance of cobbling together a minority government, a prospect that strikes fear in Jews worried about Corbyn allies downplaying, for instance, anti-Jewish hate crimes.

“The Jewish community is a tiny part of the country that’s always suffered from prejudice, and it has relied for a long time on relations with the central government,” said Adam Wagner, a human rights lawyer who is representing a complainant in the equalities watchdog’s investigation into Labour. “And there will be a government instead which the mainstream Jewish community has effectively severed ties with, and that’s extremely worrying.”

Online and over Shabbat dinners, arguments about the election have grown bitter. Those grudgingly planning to vote for Labour have been called traitors to the community and self-hating Jews. Anti-Corbyn die-hards, on the other hand, have been branded the handmaidens of a hard Brexit.

The conundrum facing British Jews owes in large part to the country’s winner-take-all voting system, which renders many votes for smaller parties useless.

In a heavily Jewish north London seat, though, the Liberal Democrats, a centrist anti-Brexit party, have stormed into the lead in some polls by running Luciana Berger, a Jewish, ex-Labour lawmaker who has faced a raft of anti-Semitic abuse.

The election has even thrown rabbinical conventions into turmoil.

Rabbi Jonathan Romain, for one, took the extraordinary step recently of telling his congregants to vote for whichever party would keep Labour out of power, shattering a long-held tradition in British synagogues that rabbis stay strictly out of party politics.

“I felt we were in a new situation, and a new political reality superseded normal considerations,” he said in an interview. “It wasn’t time to tut-tut from the sidelines.”

But other rabbis disagree, making the case from the bimah, or synagogue podium, that being Jewish is more about showing solidarity with all marginalized people than protecting Jews. “If we turn away from these values, turn inward, we will betray our purpose and our destiny,” Howard Cooper, a rabbi in north London, said in his Rosh Hashana sermon.

In the back of some Jews’ minds is another dread: that if Labour loses the election, strengthening the right’s grip on power and ushering in a hard Brexit, an aggrieved pro-Corbyn left will unjustly turn on Jews for raising a ruckus over anti-Semitism.

“It’s one of my biggest worries,” said Emily Hilton, another founder of Jews Against Boris. “That Labour will lose and everyone will blame the Jews.”