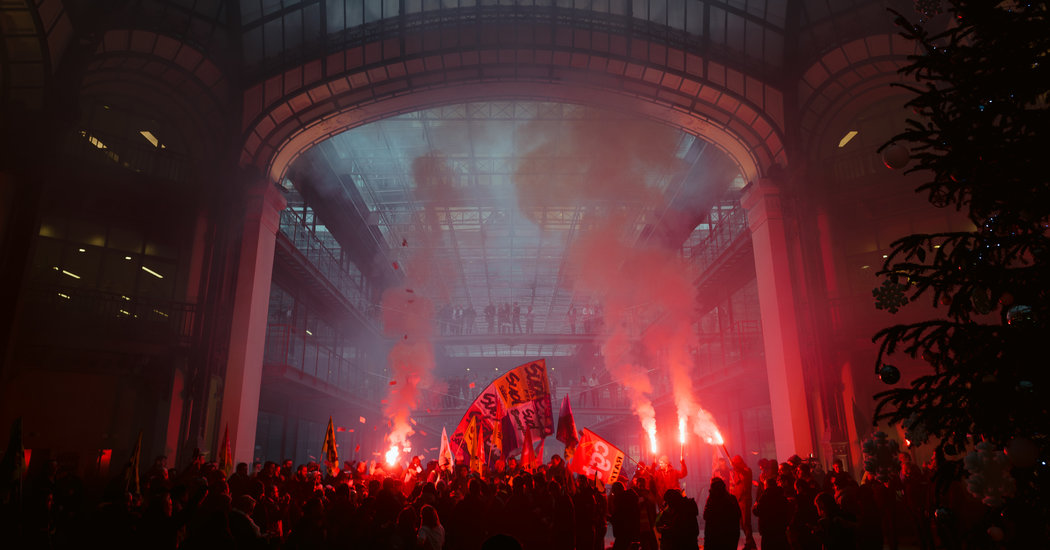 PARIS — A bright red tapestry featuring the Cuban revolutionary Che Guevara over the words “Onward toward victory!” exhorts strikers not to give up, in the union’s dingy local headquarters. Outside, the local’s boss shouted through a megaphone at the Gare de Lyon train station: “The rich should never forget: There will always be the sweat of the poor on their money!”

The transportation strike against the French government’s pension overhaul plan is already the longest in the country’s history. As it entered its sixth week on Thursday, thousands of protesters again took to the streets all over France.

Who stands to gain and lose in the pensions overhaul demanded by President Emmanuel Macron is debated every day. Nobody agrees on the details.

But beyond them is a much larger conflict over class, privilege and money amplified by 200 years of French history. Those deep underlying issues are helping sustain a marathon movement that is testing the patience of the French, hurting their economy and again exposing the class fault-lines in Mr. Macron’s would-be reformist presidency.

The bitter class-themed rhetoric at the Gare de Lyon in Paris is not an accident. The current fight has roots, real and perceived, in much earlier ones — first the overthrow of centuries of upper-class privileges during the French Revolution, and then decades of bitter conflict between capital and labor in the 19th century, from which emerged the pension system that Mr. Macron wants to scrap.

The language of those older fights echoes deeply in the current one, hardening positions on both sides, and especially on the union side.

Meanwhile, the French are growing weary. Train transportation is at the heart of French life in a way it is in few other countries. Reduced train service has cut the provinces off from Paris, where the subway’s virtual absence has cost millions in lost sales and striking cultural workers have forced dozens of theater and opera cancellations.

Support for the strike, which was initially high among French people anxious over their retirement, is edging down. Mr. Macron is counting on a further decline even as he cedes some ground — to the police, to ballet dancers at the opera, to the military — in the face of unrest in the streets and unease in much of the population over his plans.

The president wants to replace the current system of 42 pension regimes, most of which are tailored to match individual professions, with a single points-based scheme that will be the same for everybody.

But it is these individual regimes — fought for tooth-and-nail over the years by the different working groups, and jealously guarded as embodying rights, not privileges — that are at issue.

Mr. Macron wants to do away with them; the workers are demanding that he throw out his whole overhaul.

Behind the marathon rail and subway shutdown is a simple French confrontation, older even than the revolution of 1789: haves versus have-nots, rich against poor, the protected against the exposed.

It is a face-off that exists in the minds of the strikers as much as it does in fact, but it is no less real. Perception has become reality, egged on by history and the rhetoric of the strike leaders.

“It’s two ideas of social protection, two different notions of the social project, that are in conflict,” Philippe Martinez, the leader of the hard-line General Confederation of Workers union (known by its French initials, C.G.T.), said as he emerged from another fruitless meeting at the prime minister’s office just before Christmas.

“It’s a choice of society that’s at the heart of this reform,” Mr. Martinez said again on French television this week.

That language, criticized as excessive by some analysts, has nonetheless penetrated the thinking of thousands of strikers, especially in the C.G.T., the fiercely anti-Macron union at the heart of the strike.

For decades the union was closely tied to the French Communist Party. Mr. Martinez is a former party member; the union’s deputy who heads the rail workers’ branch has a bust of Lenin in his office.

“It’s very difficult for us to find common ground with this government,” said Bérenger Cernon, the union’s local head at the Gare de Lyon station. “On their side it’s about, ‘You make out for yourself.’ With us, it’s all about solidarity: liberty, equality, fraternity.”

“They think, ‘We’ve succeeded, so everybody else can also,’” he added. “But individual success has never allowed society to advance. It has never benefited the collective.”

That point of view has seeped deeply into the union’s rank and file, and it motivates them.

“There’s Macron’s vision: He’s always about making profits,” said Sebastien Preaudat, a C.G.T. ticket-checker at the station. “But we’re not here to make money. We’re here to provide a service to the public. And those people” — Mr. Macron’s government — “they come from the world of finance. We’re fighting just to say, ‘We’ve worked all our lives, and now we have the right to rest.’”

The railway workers have become a target of derision on the French right, because many of them are allowed to retire as early as 52, with a substantial pension that in some cases is considerably higher than the average. The workers see this not as a privilege but as an essential affirmation of their special status in French society.

“To a reformer like Macron, this kind of corporatist protection, it’s an archaic vision,” said Philippe d’Iribarne, a sociologist at the National Center for Scientific Research in Paris. “But France remains a society composed of ranks, and it is permanently threatened by the arrogance of the strong and the resentment of the powerless.”

“In France, the equality that people dream about is: everybody gets to attain the same noble status,” Mr. d’Iribarne added.

So Mr. Macron’s rationalist pensions overhaul finds no favor in a union movement uninterested in that brand of equality. Mr. Macron aims to offset the system’s likely looming deficit and its shrinking ratio of workers to retirees. He wants to put everybody on the same footing in a points-system accrued by workers.

“Macron’s a financier who only sees things in terms of competition. We, we have a collective vision,” said Arnaud Bourge, a train driver who listened in the Gare de Lyon courtyard with hundreds of other workers as they were exhorted to remain on strike. “It’s two completely opposed views.”

Mr. Macron has a manager’s-eye view of France’s pensions problem that has found favor with his upper-middle-class supporters, some intellectuals, and analysts, but not with workers who want to preserve their gains.

“Really, it’s not two ‘projects for society,’” said Dominique Andolfatto, a unions expert at the University of Burgundy, rejecting the view of Mr. Martinez, the union boss. “There’s one that takes into account certain social and economic realities, and there’s the other that says, ‘We’re not touching anything, the ship goes in the same direction, never mind about the iceberg.’”

But as the strike wears on, lawmakers in Mr. Macron’s party are getting nervous.

“We are witnessing the return of the opposition between employers and workers,” said Jean-François Cesarini, a member of Parliament who supports Mr. Macron. Lawmakers are particularly disturbed by the government’s intransigence on a sore point with the unions: the plan to raise the retirement age from 62 to 64.

One important moderate union, the French Democratic Confederation of Labor, has suggested a potential compromise, so far without result.

“When a country is deeply divided, not seizing the hand that is extended to you is extremely dangerous,” said Aurélien Taché, another lawmaker in Mr. Macron’s party.

In the Gare de Lyon courtyard, the dozens of strikers milling around were asked for a show of hands about whether to prolong the strike. Every hand shot up, and there was a roar of approval.

“Now, they are proposing to take everything from us,’’ said Mr. Préaudat, the ticket-checker. “And I’m not going to go along with it.”