MERINGO, Australia — On the mountainous South Coast of Australia, spring has begun — which means there are only a few more weeks to prepare for another fire season, looming in the distance like a villain on the march.

After last year’s blazes burned through 46 million acres, a chunk of Australia larger than Syria, brick chimneys are all that sit on spacious lots where homes used to welcome laughing children. Animals appear in smaller numbers. Hillsides once lush and green are now covered with trees as dead as matchsticks, and even the rivers are choking with ash.

A landscape once so welcoming and majestic now feels forever threatening.

“The fires were so big, no one knows how to cope with the enormity of it,” said Julie Taylor Mills, one of many anxious property owners rushing to prepare for another summer of dry, hot and frightening weather. “We’re all scared and only just starting to deal with it.”

From the American West, where hundreds of thousands of acres are now burning, to Australia, Siberia, Portugal, Brazil and Indonesia, the world is being forced to change how it lives with fire. Some call it “nature’s revenge.” As the earth warms from the burning of fossil fuels, wildfires are becoming larger, hotter, more frequent and far more destructive.

But the images of orange flames and homes burned to charcoal represent only the opening scene of our fiery era. What’s following, at least in Australia, is a drama of adaptation and fear — a desperate urge to do something that might ward off another round of ruin.

Climate change is still a heavy lift. Australia’s conservative leaders have failed to address the issue as a Royal Commission on last year’s bush fires slowly works toward a final report. But with a lag time of decades between even the most aggressive emissions policy and a less volatile climate, both the government and residents have prioritized what they see in front of them: a ravaged countryside that is both a reminder of loss and a cause for continued anxiety.

Nowhere is the dynamic of grief and disruption more visible than on the country’s South Coast.

In Eurobodalla, a rustic coastal region that runs south from Batemans Bay for 80 miles or so, tears have only recently stopped flowing. Ms. Taylor Mills is one of many who have turned for the first time to local Aboriginal fire experts for help with controlled burns that aim to make the land that didn’t get scorched last year less of a threat. Others, in areas that did burn, have been busy raking up branches and dead trees for preventive burns of their own.

Fire officials are convinced that there’s simply not enough fuel left to make this year as bad as the last — but the traumatized are not convinced. Last year’s blazes crushed this place. The fires burned 79 percent of the Eurobodalla Shire Council, which covers an area about the size of Long Island, and destroyed or damaged more than 700 homes in an area of 37,000 people. 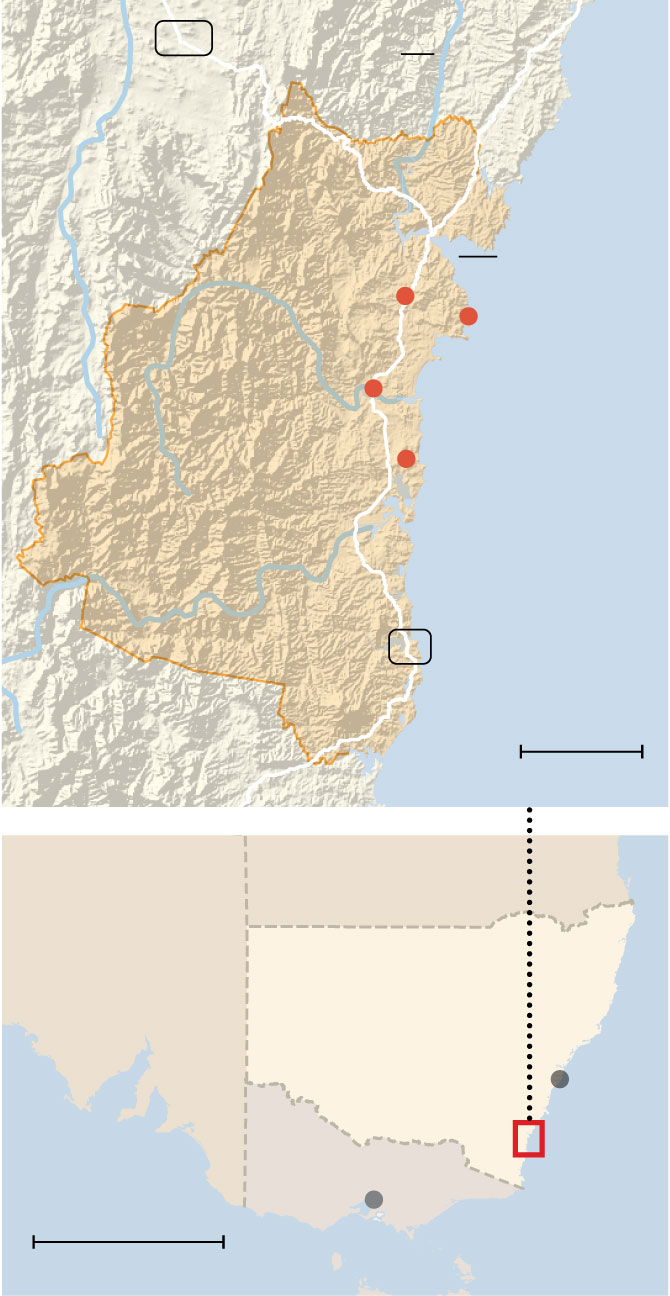 The pockets that escaped sit mostly near the coast, including Ms. Taylor Mills’s 40 acres. But no 10-minute drive is complete without seeing trailers where homes used to be and trees the color of oil, or charred and sprouting with green shoots at odd angles.

The longer-term ecological consequences are shocking even for the experienced.

Eight months after the fires, a beloved coastal outcrop called Pretty Point is still soot-blackened and dead except for weeds. Paul Martin, an invasive species supervisor with the Eurobodalla council, said it would struggle for decades. He added that many burned-out areas were being overrun with bitou bush, a South African shrub that crowds out local plants.

A few miles south, in a creaky wooden shed on the Clyde River, Ewan McAsh, a marine scientist and oyster farmer, said heavy rains now brought enough ash and sediment from eroded forests to shut down harvesting for five weeks, much longer than storms did before the fires.

He tapped his finger on a giant water tank where he kept a few thousand oysters safe from the ashy deluge. He said he planned to buy several more.

“There is no returning to normal; there is no normal,” he said. “We just have to change.”

Many of his neighbors agree. Land clearing has become more common than barbecues. Even healthy trees cherished for their shade now look like towers that could burn and topple.

Calls to 000, the equivalent of 911, have been flooding in as people report both preventive burns by their neighbors and those who fail to clean their property of brush and leaves.

“We’re getting swamped with hazard complaints from the community,” said Angus Barnes, the operational officer for the Rural Fire Service on the South Coast, based in Moruya. “People have started seeing the bush in a very different way.”

In the small town of Mogo, where the main road is still missing a half-dozen businesses that burned to the ground, Barry Horsburgh and his wife, Teresa, said the entire area was trying to do two things at once: grieve and reimagine how to relate to the land.

A neighbor across from the Horsburghs’ fabric store lost his wood-framed home and has cleared the entire property block. Many others, fearing another fire, have done the same.

Wildfires in the West ›

“People are worried the area might lose its charm,” Mr. Horsburgh, 65, said after his shop closed one night. “But we’re also more conscious of what we don’t want to happen again.”

A few hundred yards in the distance, smoke rose from an area west of the main highway. As darkness and a breeze made the yellow flames dance, a resident, Paul Allen, was watching over the small blaze with a flashlight in one hand and a beer in the other.

He’d only been back on the property for a month, living in a trailer where the family home used to be, and he said he did not intend to just wait for another fire and then evacuate.

“We’re all paranoid in the end, and no one can do anything about it,” he said. “I dare anyone to come up and tell me not to cut a tree down right now.”

The government is actually giving landowners more responsibility. State fire officials recently adopted a series of recommendations from an independent fire inquiry, including a measure requiring that people ensure their properties are safe by clearing land and conducting hazard-reduction burns.

Further changes, to allow for more preventive burning by firefighters and Aboriginal experts, could arrive at the national level later this year.

Interest is already surging. The Walbanja elders who worked with Ms. Taylor Mills — Andrew White, Owen Carriage and Les Simon — said they had received more than 60 requests for help with burns that rely on Aboriginal knowledge to minimize the impact on animals and native plants.

“When you’ve been living with the environment for thousands of years, you know how to read it,” said Mr. Carriage, 67, as he surveyed the burned grass on Ms. Taylor Mills’s property. “You’re a part of it. And fire is a part of it.”

For most people, though, fire is unfamiliar and downright scary, especially because it promises to visit again and again.

When firefighters set off a preventive burn in Moruya recently, the smell of smoke seeping into the local primary school triggered tears from children who worried that the infernos of their nightmares had returned.

Earlier this month, Ms. Taylor Mills and her neighbor experienced a flashback of their own when they smelled Eucalyptus smoke drifting from the distance. They rushed toward the source, fearing that the national forest behind them was on fire again. They breathed a sigh of relief when they discovered it was just a neighbor, “Old Jack,” burning leaves.

“It occurred to me that this is our legacy,” Ms. Taylor Mills said. “A vigilance and background ‘internal alert system’ that was never there before.”