SAN FRANCISCO — California’s biggest utility is battling for its future. And it’s not a simple fight.

Wildfire victims are joining forces with bondholders to contest its bankruptcy plan. Hedge funds are arrayed on both sides. Shareholders could come away winners or losers — and so could customers.

The competing interests are colliding in a San Francisco courtroom where a judge is sorting out the restructuring of the utility, Pacific Gas & Electric.

PG&E is struggling to control its destiny, and even to remain intact. On Monday, as others sought to take the matter out of its hands, it bought more time. But the biggest question came no closer to resolution: how many billions of dollars it needs to set aside for damage, injuries and deaths that its equipment has caused. 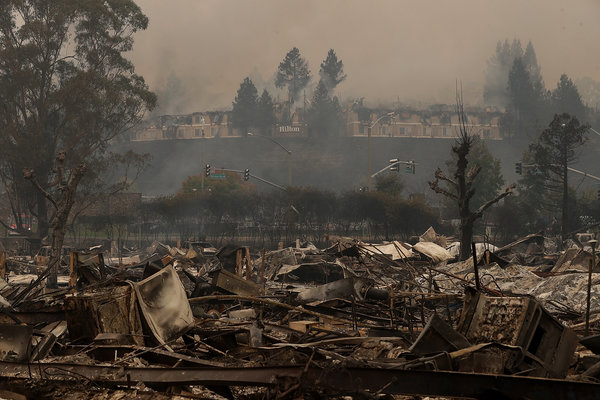 California Wildfires: How PG&E Ignored Risks in Favor of Profits

That liability, the biggest variable in PG&E’s financial outlook, is entangled in a web of legal and political proceedings.

[Read more: Why many wildfire victims, ill informed or overwhelmed, may miss a chance for compensation.]

PG&E’s reorganization plan calls for a $20.4 billion fund that would allocate $12 billion for insurance claim holders and public entities that have settled with the utility, plus $8.4 billion for wildfire victims. PG&E’s plan would be financed by a combination of bank loans and the proceeds from issuing new shares.

The offer has been rejected by lawyers representing a committee of fire victims, who say the amount is insufficient to cover tens of thousands of claims from victims of fires sparked by PG&E equipment since 2015. Instead, the committee has thrown its support behind a rival reorganization plan spearheaded by a group of PG&E creditors that includes prominent hedge funds, including Elliott Management, and Pacific Investment Management Company, the mutual fund giant.

“The only lever that appears to have been effective in pressuring the debtors to attempt to move the plan process forward has been the ongoing threat of an alternative plan,” the groups said in a filing last week.

They have asked the bankruptcy judge, Dennis Montali, to allow a competing proposal under which the funds would invest $29.2 billion, and offer up to $14.5 billion to individual fire victims. The funds would get a majority stake in the reorganized PG&E, gaining control from the current shareholders, many of which are also hedge funds.

Lawyers for PG&E have argued in court filings that the bondholder plan is an effort by hedge funds and victims’ lawyers “to do a deal to overpay each other” with the utility’s assets. The company says it has obtained commitments for $14 billion in new equity capital and $34 billion in new debt financing with “terms far superior” to the bondholders’ plan.

Stephen Karotkin, a PG&E lawyer, said that “there are plenty of alternative sources of capital out there” if the utility’s liabilities are higher than expected, but he did not get specific.

After a heated court hearing on Monday, Judge Montali deferred a decision on whether to end PG&E’s right to shape the bankruptcy plan, saying he would rule soon on whether to let alternatives proceed.

Along with the jockeying over control, lawyers for wildfire victims are pushing back against a court-imposed deadline of Oct. 21 for wildfire victims to file damage claims against PG&E. While about 30,000 claims have already been filed, the lawyers have warned that up to 70,000 people — many still struggling to find stable housing or cope with trauma — may be left behind.

“How many fire victims are successfully going to be precluded from bringing their claims?” Steven Skikos, a lawyer appointed by the court to represent victims’ interests, asked the judge Monday. “That is the battle here.”

Judge Montali indicated sensitivity. “Why should we have a corporate control battle when we really ought to be prioritizing the victims?” he asked. But after Mr. Skikos said he intended to file a motion to delay the cutoff date, the judge was noncommittal on when it might be considered. If there is merit for an extension, the judge said, the issue could also be addressed after the deadline.

PG&E’s ultimate exposure will be probably influenced by findings in other courtrooms.

Judge Montali has asked a federal district judge to estimate those damages, with testimony from expert witnesses set for January. And in response to lawsuits by wildfire victims, a California Superior Court judge has scheduled a January trial to re-examine whether PG&E was responsible for a devastating 2017 fire in the state’s wine country, which the state initially concluded was not caused by the utility.

PG&E has said it will pay all claims approved by the court. While its plan stipulates an amount for damages to wildfire victims, a lawyer familiar with the case said the figure was a placeholder in negotiations and efforts to secure funding for reorganization plans, not a maximum payout.

Lawyers presenting the rival plan said they were prepared to revise their proposed numbers as well.

Other interests will have to be weighed in the case. Regulators and consumer watchdog groups warn that PG&E’s plan does not do enough to protect ratepayers against the prospect that they will have to absorb liability costs in their bills.

The liabilities that drove PG&E into bankruptcy arise in large part from a provision of California’s constitution under which it is responsible for damage caused by its equipment even when no negligence is involved. It is pushing to complete the bankruptcy process by a June deadline to take part in a new fund established by the State Legislature to help provide utilities with a backstop against liability exposure in the future.

Outside the courtroom, concerns persist about PG&E’s safety and record-keeping practices. Last week, state regulators announced that the utility would pay $65 million to settle claims that it had falsified records related to gas pipeline safety. PG&E is on probation after its conviction on criminal charges of violating federal pipeline safety regulations and obstructing investigations after a deadly 2010 gas pipeline explosion.

Over the summer, a federal monitor in the probation case also found “systemic” shortcomings in fire-related public safety efforts by PG&E’s electricity business, including a failure to identify and trim trees that threaten to hit power lines.

One prospect in PG&E’s difficulties is that it could be broken up. San Francisco city officials in September offered $2.5 billion to take over the company’s local power generation equipment. The utility said in a statement that it did not “believe municipalization is in the best interests of our customers and stakeholders,” but that it would continue discussions with the city.

As PG&E’s future is sorted out, many who will be affected are far from the courtrooms.

Inez Salinas, a 34-year-old hairstylist, and her daughter, now 3, were uprooted for months after their uninsured trailer was incinerated last year in the Camp Fire, which destroyed the Sierra foothill town of Paradise. With the help of the Federal Emergency Management Agency, the Red Cross and a volunteer builder, they moved over the summer into a tiny house in a rugged area near Paradise. It is powered by a generator, and it would cost tens of thousands of dollars to add a well and a septic system.

Eventually, Ms. Salinas would like to build a more permanent homestead. She found a lawyer and has been told that a claim on her behalf was filed with PG&E, which was blamed for the fire. She is unsure how much she will receive or when, but she is counting on something.

“Otherwise, I really have no way of building,” she said.