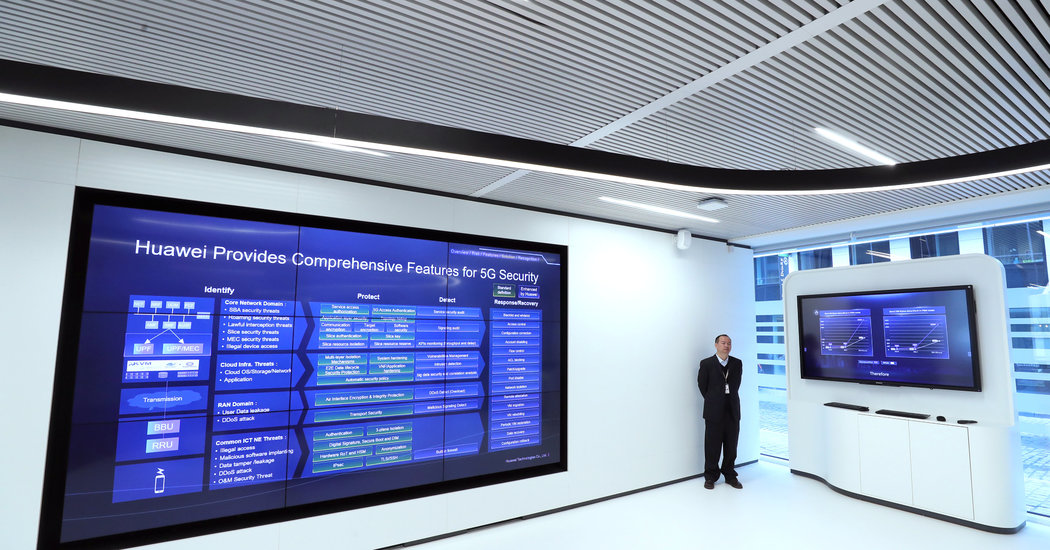 BRUSSELS — The committee room of the European Parliament was crowded with lawmakers and lobbyists who were facing off with executives of the telecommunications giant Huawei. One lawmaker, eager to raise the trust issue, got directly to the point: Could Huawei be a front for Chinese state espionage?

Abraham Liu, the company’s top official in Europe, pushed right back. Huawei, he said, is completely independent, with no obligation to spy for China, and to do so “would be like committing suicide.”

Then he added a twist — and a veiled swipe at Huawei’s loudest critic, the Trump administration: It is Huawei, not America, that shares European principles.

“Europe’s values of openness, innovation and the rule of law have led to it being a powerhouse in mobile communications — and Huawei shares these values,” Mr. Liu said.

In Washington, Huawei is treated like a grave security risk over concerns that Chinese intelligence agencies could use the company’s technology to infiltrate the systems of foreign customers. Yet in Brussels, the European Union’s de facto capital, the company is waging a multifaceted charm offensive, partly by exploiting European distrust toward the Trump administration — and, for now, it is working.

As the company competes to build Europe’s next-generation 5G wireless networks, Huawei is spending millions of dollars on an intensive advertising and lobbying campaign, while making a bold argument to European policymakers: That while the Trump administration is unpredictable and unreliable, Huawei is a guarantor of privacy, transparency and globalization.

The message hasn’t gone unnoticed, nor has the irony.

“The Chinese have started brazenly claiming that it is China, not the United States, that shares more values with Europe,” said Julianne Smith of the German Marshall Fund in Washington.

“Chinese scholars and officials also frequently remind European audiences that unlike the United States, China believes in climate change and multilateralism, a message that is especially powerful in a place like Germany,” she said.

To push its message, Huawei has made unexpected moves. One is the hearing, in October, in which Mr. Liu spoke about values. It was not a case of a corporate leader being hauled before lawmakers for a grilling. Instead, Huawei had organized the “public debate” with members of the European Parliament, live-streamed the proceeding and posted the video online.

In the United States, the Trump administration has essentially blocked Huawei, but Mr. Trump’s efforts to push European allies to ban Huawei have fallen flat.

Neither the European Union nor individual countries have moved to restrict the company’s access to their markets. Hungary, whose far-right prime minister, Viktor Orban, identifies himself as a Trump ally, announced in November that Huawei would lead its 5G infrastructure rollout.Even as government officials have debated its role, Huawei has forged ahead, and says it has already made dozens of deals to sell 5G hardware to wireless carriers across Europe. The extent of its involvement is unclear, because a single carrier can buy gear from multiple vendors, and some pieces of equipment are more security-sensitive than others.

And at a NATO gathering near London this month, when Mr. Trump pressed Prime Minister Boris Johnson to shut Huawei out of Britain, Mr. Johnson — who has postponed a decision on the question — was noncommittal.

Secretary of State Mike Pompeo, in an opinion piece published by Politico Europe, implored policymakers “not to give control of their critical infrastructure to Chinese tech giants.”

To a degree, European policymakers in charge of assessing risks to cybersecurity share the United States’ concerns about Huawei. A recent European Union report highlighted, without naming Huawei, that a non-European 5G technology provider could be forced to allow its government to hack into and even control its networks, enabling access to private data, trade secrets and national security operations.

In Germany, Chancellor Angela Merkel has said that Huawei should be allowed to compete for 5G contracts, but other politicians have pushed back, indicating that the company could be in for a fight there.

“No Chinese company is an independent company,” Norbert Röttgen, a former government minister from Ms. Merkel’s party, said recently, adding that Huawei’s involvement was “an imminent question of national security.”

Yet one German telecommunication company, Telefonica Deutschland, has announced that it intends to contract Huawei for its 5G development.

European Union rules make it difficult to target individual companies for political reasons. The bloc could impose stringent standards of conduct and openness for 5G contractors that could be used to restrict Huawei but, as yet, has simply let each member country to decide how to proceed.

Distrust toward the Trump administration is also a significant factor, as European policymakers worry that American sanctions on Huawei are simply a bargaining chip in the United States’ broader trade war with China and might be reversed.

“There is a fear that if you take what potentially are quite expensive decisions with regards to 5G because the Americans have told you that they are a security problem, and then President Trump gets a trade deal with China and suddenly Huawei is all O.K. again, then you’ll feel like the earth has moved under your feet,” said Ian Bond, director of foreign policy at the Center for European Reform, a policy group in London.

Years before the advent of 5G, Huawei was establishing a major presence in Europe, where it ranks third in mobile phone sales, behind Samsung and Apple. The company says it has 12,000 employees, and 23 research and development centers in Europe, a way of building favor and familiarity with policymakers.

And it has moved boldly to position itself in Brussels.

Huawei has spent more than $3 million this year on advertising and lobbying, according to its disclosures in the European Union lobbying registry. That is more than the combined spending of its European 5G competitors, Ericsson and Nokia, and far more than its American rival, Qualcomm.

In a huge advertising campaign this year, the company plastered banners featuring happy faces at Brussels Airport and in key spots around the city.

In a press packet sent to hundreds of journalists there, Huawei argued that “It is crucial to roll out 5G the European way, in line with European values.” Huawei, it added, was best placed to guarantee those values.

The company also placed advertising in the most insider-focused journalism product in town, Politico Europe’s daily newsletter. “Brussels Playbook, presented by Huawei — Vote for 5G,” the subject line of an early-morning email read in late May this year.

Huawei has made donations to at least two major research institutions in Brussels that study European policy. Several other institutions receive funding from the Chinese government.

For Huawei, public records show that the amounts are relatively small, about $55,000 per organization. But they guarantee that the company is a player in the Brussels policy machinery.

In an interview, Mr. Liu said the company spent money on advertising and lobbying because of “attacks from the U.S. toward Huawei.” He said the company was “obliged to talk to the stakeholders in Europe and also the rest of the word, because the U.S. is very powerful — the U.S. government is super-powerful.”

“They’re trying to murder us,” he said.

In many ways, Huawei is using the Brussels playbook of major American technology players like Google, which has pioneered the use of public advertising campaigns in Brussels to influence legislation or regulations. The two companies even share a small, unassuming office building three blocks from the European Commission, where Google occupies three floors and Huawei one.

A review of the European Commission’s transparency register shows that Huawei employees met with top officials from the Commission, including commissioners and their top civil servants or members of their cabinets, 46 times in the past five years. The vast majority of those meetings were about 5G, the register shows.

“It’s not fair on us as a private company to face such a challenge from a superpower,” he said. “And for Europe, we appreciate that the European stakeholders take a different approach.”