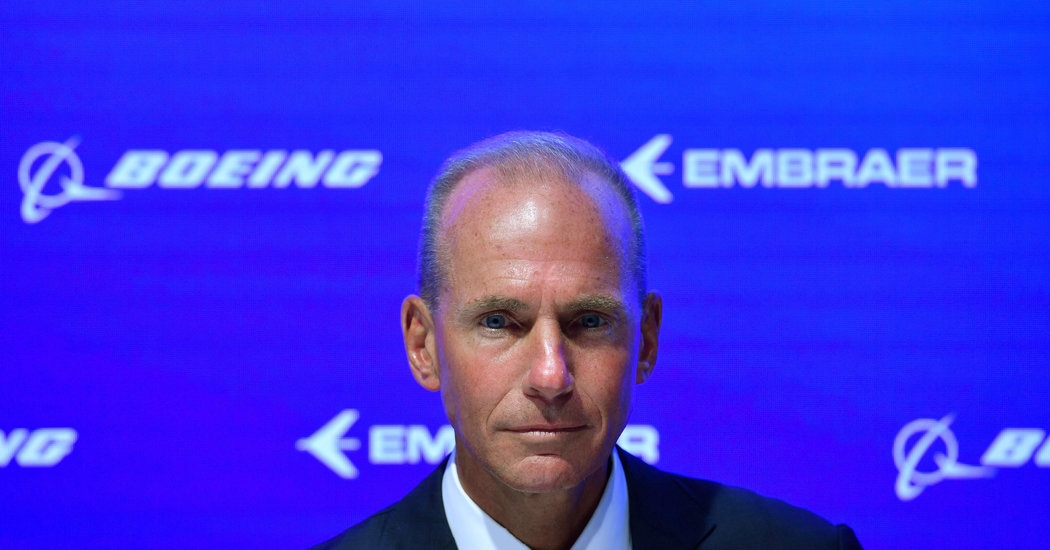 Boeing’s chief executive, Dennis A. Muilenburg, is appearing before Congress this week for the first time since the crashes of two 737 Max jets killed 346 people, left the company mired in crisis and raised new questions about government oversight of the aviation industry.

“We know we made mistakes and got some things wrong,” Mr. Muilenburg plans to tell the lawmakers on Tuesday, according to a copy of his opening statement. “We own that, and we are fixing them.”

Mr. Muilenburg is expected to be questioned on a number of issues, including how the Max was designed and certified, what happened during the two crashes and why it is taking so long for the planes to return to service.

Here’s what to watch for during the hearings:

The pilot who voiced concerns

In 2016, well before the 737 Max was certified by the Federal Aviation Administration, the plane’s chief technical pilot told a colleague that a new system on the plane was “running rampant” in simulator tests. The pilot, Mark Forkner, went on to say that he had unknowingly lied to regulators.

The messages, which were made public this month, raise serious new questions about what Boeing knew about the new system, known as MCAS, which played a role in both crashes. Boeing said in a statement that it had not been able to speak to Mr. Forkner, who now works for Southwest Airlines, about the messages.

But Mr. Muilenburg may face questions about who else besides Mr. Forkner was aware of the problems he had on the simulator, and about the pilot’s belief that he had lied to regulators. Lawmakers are also likely to ask why Boeing, which has known about the messages for months, waited so long to hand the messages over to Congress and the F.A.A.

The Times was the first to report on Mr. Forkner’s involvement in the Max, revealing that during the plane’s development, he asked the F.A.A. to remove mention of MCAS from the training manual.

F.A.A. oversight under the microscope

As the 737 Max was developed, it was Boeing employees working on behalf of the F.A.A., not government inspectors, who signed off on many aspects of the plane. This system of so-called delegation, which lets manufacturers sign off on their own work, is under scrutiny.

Investigations by The New York Times have revealed that Boeing employees sometimes felt pressure to play down safety concerns and meet deadlines, that key F.A.A. officials didn’t fully understand MCAS and that the F.A.A. office in Seattle that oversees Boeing was seen inside the regulator as excessively deferential to the company.

Boeing and its allies in industry also waged a yearslong lobbying campaign to get the F.A.A. to delegate even more to the company, an effort that paid off with the passage of last year’s F.A.A. reauthorization act. Now, lawmakers are questioning whether the entire system of certifying airplanes needs an overhaul.

“No matter what we did last year, we need to be pulling some of that back into the public sphere, and take some of it out of the hands of industry,” Representative Rick Larsen, a Democrat from Washington, told The Times.

Boeing expected to have the Max flying by now

More than seven months after the plane was grounded after the crash of Ethiopian Airlines Flight 302 in March, Boeing has still not satisfied the F.A.A.’s requirements.

In addition to completing a software update for MCAS and updated training requirements for the plane, Boeing and regulators have discovered additional problems that have resulted in months of delays.

As the delays persist, airlines that were counting on the Max are facing growing financial pressure. If the Max remains grounded into next year, it could force Boeing to shut down production of the plane, which would have a major impact on the United States economy.

Boeing last week reiterated that it still expected the F.A.A. to clear the Max to fly before the end of the year. But the company has already had to push back its estimates on the plane’s return to service several times.

How the Max came to be

Boeing decided to produce the Max as it raced to keep up with its chief rival, Airbus. Engineers working on the plane faced pressure to avoid delays, and efforts were made to minimize differences between the Max and previous generations of the 737 in order to avoid costly training.

On a conference call with reporters on Monday, Representative Peter DeFazio, chairman of the House transportation committee, said he had documents suggesting that there was a cultural issue at the company that resulted in “a pattern at Boeing of extraordinary production pressures.”

Given that setup, lawmakers including Mr. DeFazio are likely to zero in on what Boeing is doing to avoid letting production deadlines compromise passenger safety.