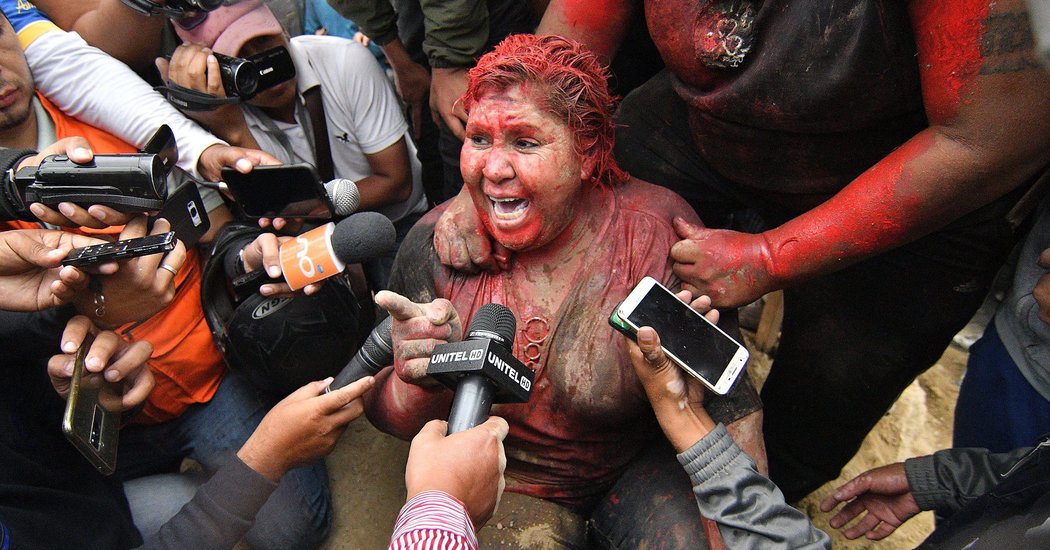 LA PAZ, Bolivia — In a spasm of violence related to last month’s disputed presidential election, protesters kidnapped the mayor of a small town in central Bolivia on Wednesday, forcibly cut her hair, drenched her with red paint, made her sign an improvised resignation letter, then marched her through the streets barefoot, witnesses said.

The protesters had accused the official, Patricia Arce, mayor of Vinto, of orchestrating a pro-government mob that tried on Wednesday to break up an antigovernment blockade, a clash that resulted in the death of an antigovernment protester, officials said.

Ms. Arce is a member of the party led by President Evo Morales, who claims he won a fourth consecutive term in the Oct. 20 election by a sufficient margin to avoid a runoff. But opponents contend that the election was marred by fraud and have paralyzed the nation with protests that have erupted into clashes with security forces. At least three people have died in the demonstrations.

President Morales condemned the attack on the mayor. “All my solidarity with our sister, mayor of Vento, Patricia Arce, who was kidnapped and cruelly harassed for expressing and defending her ideals and the principles of the poorest,” he wrote on Twitter.

Earlier in the day, clashes had erupted in Vinto between club-wielding supporters of Mr. Morales and antigovernment protesters who were blocking a bridge. When word spread that at least one person, a 20-year-old man, had been pummeled to death, a mob of antigovernment protesters marched to town hall to seek revenge on the mayor, whom they accused of having bused in thousands of Morales supporters to break the blockade, witnesses said.

Protesters wearing masks to conceal their identities hauled Ms. Arce out of her office and forced her to walk barefoot to the bridge where the blockade was happening. The protesters — yelling “Murderess!” — made her kneel down, then cut her hair, sprayed her with red paint and forced her to sign the resignation letter, according to witnesses and local news accounts.

The mob then paraded her around town.

Throughout the ordeal, she denied that she had organized the government supporters who had tried to break up the blockade.

In a video that circulated on social media, Ms. Arce, drenched in red paint, her hair shorn, is surrounded by masked protesters. “I’m not going to shut up,” she says defiantly. “And if they want to kill me, may they kill me.” She adds: “For this process of change, I will give my life.”

Ms. Arce was eventually rescued by the police.

A team from the Organization of American States is in Bolivia conducting an audit of the election, but the results are unlikely to ease tensions. Carlos Mesa, Mr. Morales’s main challenger, has dismissed the audit and has urged his supporters to remain in the streets.

Mr. Mesa and his supporters say the vote was rigged. After polls closed on Oct. 20, Bolivia’s electoral tribunal released a preliminary vote count that suggested Mr. Morales had fallen short of the 10-percentage-point lead he needed to avoid a runoff.

Election officials stopped providing updates for nearly 24 hours without giving an explanation. But when results were finally updated the night after the election, the final tally put Mr. Morales ahead with just enough of a lead to avoid a runoff, spurring the opposition to take to the streets in protest.