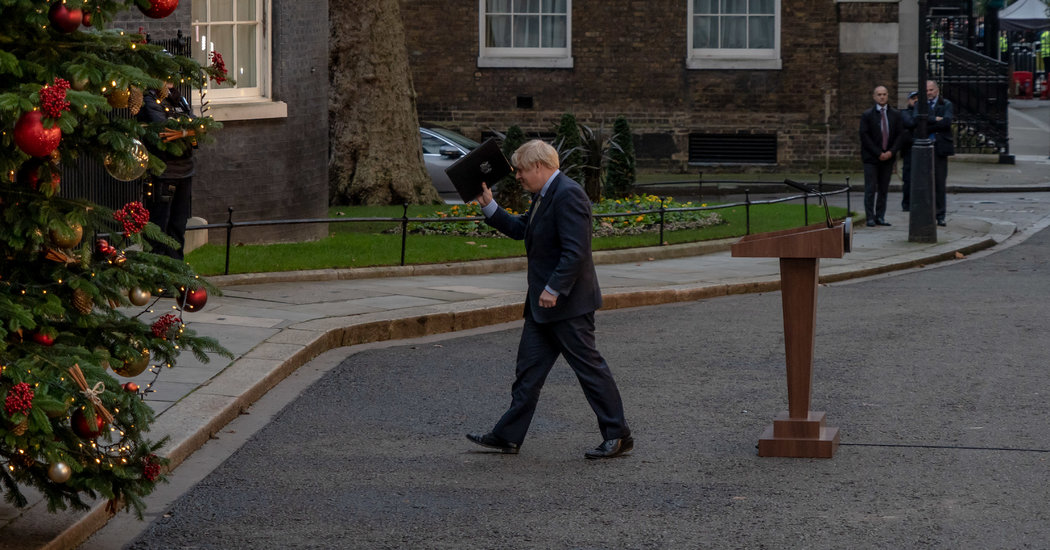 LONDON — Five days after British voters handed Prime Minister Boris Johnson the greatest political mandate of any Conservative leader since Margaret Thatcher, the country is still arguing over what he’s going to do with that power.

Even after a campaign that Mr. Johnson made almost exclusively about Brexit, nobody knows what kind of relationship Mr. Johnson truly wants with the European Union, and so the theories abound.

“A softer Brexit may well now happen,” said Tony Travers, a professor of politics at the London School of Economics. Mr. Johnson’s Conservative Party, he said, rode to victory on working-class voters, who will now pressure him to negotiate a closer long-term trading relationship with the European Union.

Not so fast, said Simon Fraser, a former head of the British diplomatic service. Mr. Johnson’s victory, he said, signified the power of fast, simple answers, and the fastest, simplest one is to make a clean break from Europe. “I’m not at all convinced he wants to do a softer Brexit,” Mr. Fraser said.

The debate has raged in newspaper columns, TV appearances and on social media — and it shows no sign of abating. It speaks to an election that was at once historically consequential and strangely inconclusive.

On Tuesday, those who argue that Mr. Johnson will pursue a hard Brexit — a divorce without close ties — seized on the prime minister’s plans for legislation that would bar Britain from extending the Brexit transition period beyond the end of 2020. That was proof, they said, that he was intent on breaking with the European Union, come what may.

The pound, which soared after the election on hopes of an end to the uncertainty, fell back on fears that Britain could fail to come to terms with the European Union by the end of the transition period — triggering a so-called “no deal Brexit” that experts warn would be economically disastrous.

But Mr. Travers interpreted the proposed law the other way. Why would Mr. Johnson rule out an extension to the trade negotiations, he said, unless his plan was for London and Brussels to end up in close alignment?

The fierce postelection debate attests, first, to the fickleness and ideological elasticity of Mr. Johnson, who almost came out against Brexit in 2016 before throwing himself into the Leave campaign.

It also speaks to the utter lack of substantive debate about the shape of Brexit during the campaign.

Mr. Johnson never tired of promising to “get Brexit done,” but he steered clear of any explanation of how he would do it, or the trade-offs involved.

The few times he did get into the details, he was often wrong. He erroneously claimed, for example, that companies shipping goods from Northern Ireland to a post-Brexit Britain would not have to fill out any additional customs paperwork, when the terms of his withdrawal agreement with the European Union will clearly require it.

Not getting drawn into the details of Brexit was a deliberate strategy that emerged after some internal debate, said Brett O’Donnell, a Republican political consultant who advised the Conservatives during the campaign.

“There was an instinct to relitigate the arguments on Brexit,” said Mr. O’Donnell, who prepared both George W. Bush and Mitt Romney for their presidential debates and coached Mr. Johnson when he led the Leave campaign in 2016.

But Mr. O’Donnell and other senior advisers, including Mr. Johnson’s senior aide, Dominic Cummings, argued that, “It was not about relitigating the arguments over Brexit but channeling people’s frustration that it had not been done yet,” Mr. O’Donnell said.

“The Brexit message is the gateway to every other message,” he added.

It helped that the Labour Party’s position on Brexit was hopelessly muddled. In seeking to shift the debate to kitchen-table issues like health care or education, the party avoided the subject almost altogether.

So, in an election ostensibly about Brexit, voters were never asked to confront to the essential question raised by Britain’s departure: What kind of trading relationship does Britain want with its largest neighbor?

But there is also little indication that the public ever wanted to have that debate.

“It’s worth remembering just how weird Brexit is,” said Anand Menon, a professor of European politics at King’s College in London. “It is an issue that has dominated our politics like no other for more than three years, and yet there is such fatigue with it.”

“The British people are not aware of the huge differences in various Brexit models,” he continued. “They just want the politicians to sort it out.”

With so little settled, Britain’s political establishment is casting about for clues in other places. The people Mr. Johnson chooses for his new Cabinet early next year might give a hint of intentions, Professor Menon said.

If he replaces current ministers who are hard-line Brexiteers, like Priti Patel, the home secretary, or Dominic Raab, the foreign secretary, that may suggest he wants closer relations with the European Union.

Analysts are also looking at particular parts of the country where pressure on Mr. Johnson could mount from inside his own party.

In Stoke-on-Trent, for example, Conservatives now hold all three Parliamentary seats. The region is heavily dependent on ceramics and, hence, on trade with Europe. Those voters are likely to be hurt by a Brexit that is too hard, leaving Britain with few ties to the bloc.

“The logic of the Conservative Party’s new base means that at least manufacturing needs to be protected as much as possible,” said Mr. Travers, the London School of Economics professor. “That gives Boris Johnson less room for a hard deal.”

Mr. Johnson himself has given few clues since his victory. He said he recognized that the Conservative Party needed to serve working-class voters in the Midlands and the North, who had historically voted for the Labour Party but switched to the Tories out of frustration with the failure to complete Brexit.

But he did not say whether the interests of those voters would have any effect on how he negotiated with the European Union — or, for that matter, how he planned to negotiate with the bloc at all.

The government’s strategy, some said, will be to relegate the trade negotiations to technical groups, while Mr. Johnson focuses on more popular, headline-grabbing initiatives like funding the National Health Services or hiring more police officers.

On Tuesday, as he spoke to his cabinet and later to Parliament, Mr. Johnson again stuck to generalities and a message of unity.

“We must recognize that people lent us their votes at this election,” the prime minister said. “It was a seismic election, but we need to repay their trust and work 24 hours a day, work flat out to deliver on it.”

“You ain’t seen nothing yet, folks,” Mr. Johnson promised, without giving a hint of what he had in mind.