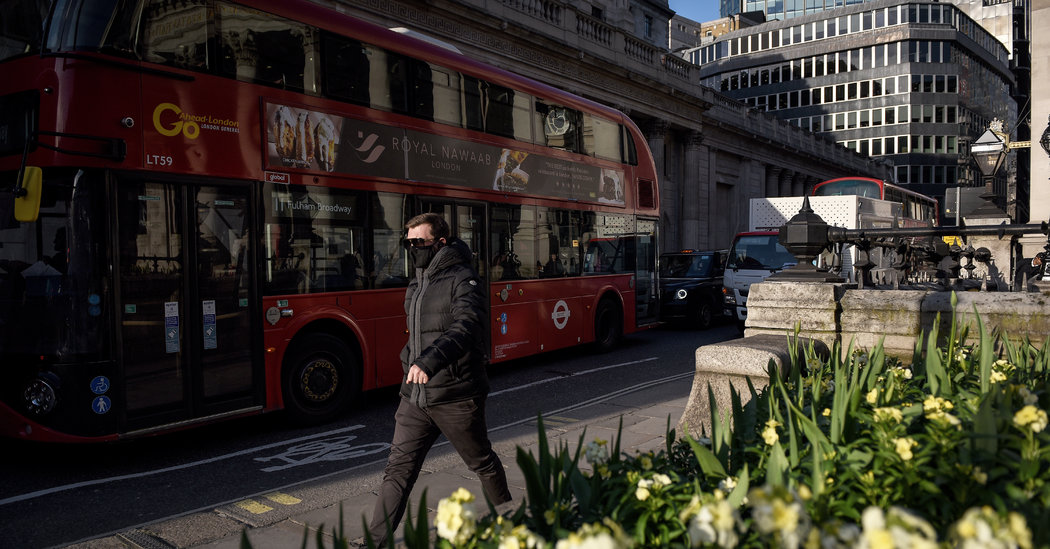 LONDON — Britain, which had stood apart from other nations in the relaxed nature of its response to the coronavirus, hardened those measures significantly on Monday, urging people to stop going to pubs or restaurants, and putting in place strict quarantine policies for those infected by the virus.

The shift, announced by Prime Minister Boris Johnson after a meeting of a government crisis committee, brought Britain closer in line with Italy, France and Germany, which have closed borders and shut down large parts of their countries. But Britain is still putting off some steps, most conspicuously the closing of schools.

With reported cases of the virus surging to 1,543, an increase of 171 in a single day, Mr. Johnson said Britain was on the cusp of a rapid spread that demanded more draconian countermeasures. He likened the latest steps to the kinds of changes the British people were asked to make in wartime.

The prime minister’s remarks, at the first of what he said would be daily briefings, were meant to reset the government’s communication strategy, which had come under fire for being muddled, opaque and failing to justify why Britain was out of step with other countries facing major outbreaks.

But the measures still left plenty of unanswered questions. The government is not ordering pubs, restaurants or clubs to close, even though it is strongly discouraging people from patronizing them. While Mr. Johnson said he “emphatically” opposed public gatherings, he did not ban them either.

Get an informed guide to the global outbreak with our daily coronavirus newsletter.

That left British cultural institutions in anxious uncertainty. The British Museum was still waiting for clarity from the government on whether it should close, a spokeswoman said in a telephone interview.

Some prominent theaters announced they were shutting their doors. The Royal Court said in a statement posted on Twitter that many in the British art world “will struggle to weather the crisis” and urged financial support.

Alex Rushmer, a chef and restaurateur who owns Vanderlyle in Cambridge, England, said on Twitter, “I have a fully booked restaurant this week (for now). And now I am in a position where I have to make a decision whether or not to place food and wine orders for the next seven days. I feel numb.”

Opposition leaders said the lack of a government order to shut down might make it impossible for businesses to claim insurance. “They will merely close and never reopen,” said Ian Murray, a Labour Party lawmaker. “These businesses don’t have large cash reserves and many survive week to week.”

Mr. Johnson’s advisers conceded their communications strategy has been flawed. When he addressed the crisis last week, the prime minister called for only modest action, urging those with symptoms of the virus to stay at home, advising elderly people to avoid cruises and asking schools to halt field trips abroad.

He opted not to curtail sporting events, even as he warned the virus would likely cause a significant death toll. The Premier League went ahead and canceled its schedule of soccer matches on its own.

On Monday, Mr. Johnson dropped any pretense of nonchalance. He said people over the age of 70 should avoid nonessential contact for the next 12 weeks. He said anyone with symptoms of the virus should stay in isolation for 14 days, as should their family members. Such precautions were especially crucial in London, he said, since it was a few weeks ahead of the rest of the country in the virus’s spread.

At the heart of Britain’s approach is an attempt to slow but extend the spread of the virus, flattening the infection curve so that more cases occur in the summer months — a time when fewer people tend to be sick — to manage the influx of patients and prevent the health service from being overwhelmed during the winter and early spring months when they have a heavy load of other patients.

But the government sowed concern last week when its chief scientific adviser, Sir Patrick Vallance, said he expected a majority of Britons to contract the virus. He said this would create “herd immunity” in the population, which could prevent the coronavirus from returning with a vengeance next winter.

While Mr. Vallance did not disown the concept of herd immunity on Monday, he argued this would arise as a byproduct of the pandemic rather than as a consequence of a deliberate strategy. The overriding objective, he said, was still to slow the course of the disease and to protect the vulnerable.

But the government also did not clear up questions about its testing policy. Britain stopped conducting tests of people in designated geographic areas, which fueled questions about its policy. Officials said they planned to ramp up testing in general, but they emphasized the goal was to devise a test of whether people had contracted the virus in the past. That, they said, would help combat the spread.

Mr. Johnson also did not disavow the government’s theory that social distancing measures need to be rolled out on a deliberate timetable, so that people will be willing to go along with the disruption to their lives. Schools, he said, might well be closed in the coming days, but Britain was not there yet.

“The crucial thing is timeliness,” Mr. Johnson said. “We think this is the right package for the moment.”