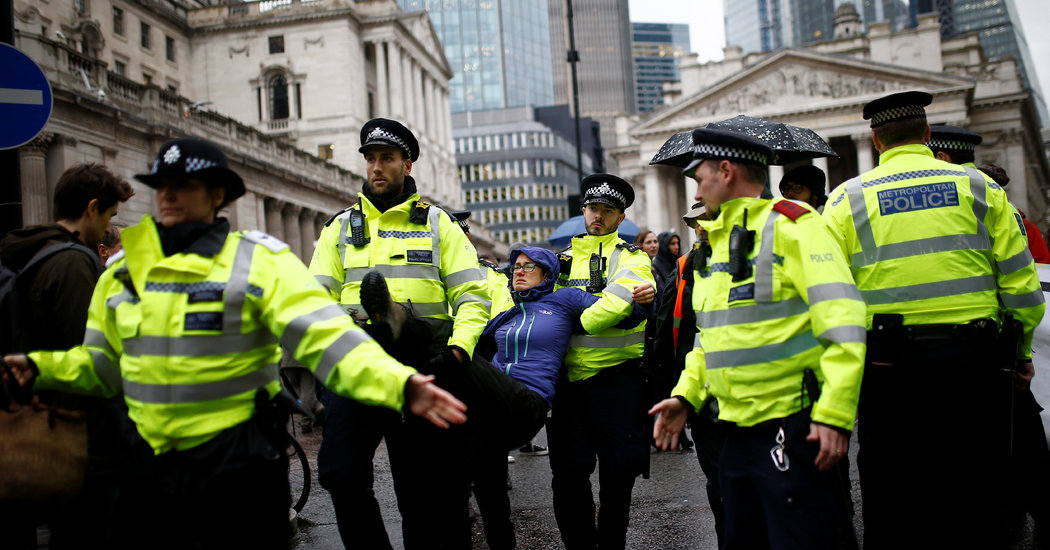 LONDON — Be on the lookout, the British counterterrorism police warned, for young people being radicalized by extremists like neo-Nazis, militant Islamists, satanists, white supremacists — and climate-change activists.

The counterterrorism police reversed course soon after it came to light that they had published a brochure that lumped the group Extinction Rebellion — not to mention animal rights activists — together with terrorist organizations, retracting the document. But on Monday, a top government official refused to find fault with it.

“Everything has to be based in terms of risk to the public, security risks, security threats, and that is based on information from the police and various intelligence that we all receive,” Priti Patel, the home secretary, said in an interview with LBC radio.

“That’s the proper thing to do,” said Ms. Patel, one of the farthest-right members of Prime Minister Boris Johnson’s cabinet. “You develop your policing approach accordingly.”

Extinction Rebellion has held many demonstrations around the world, defying bans on protesting in central London and elsewhere, and annoying countless commuters, business owners, customers and, yes, police officers. But it advocates nonviolent civil disobedience, not terrorism, attempting, in its own words, “to halt mass extinction and minimize the risk of social collapse.”

The 12-page guide brochure on extremism was produced by an arm of Counter Terrorism Policing, a national alliance of police forces, that covers southeastern England, the region that includes London. It was brought to light by The Guardian on Friday and it has since been recalled, the Guardian reported on Sunday.

The brochure states that its purpose is to help “recognize when young people or adults may be vulnerable to extreme or violent ideologies,” whether a person is “vulnerable to extremism” and if that person should be referred to the government’s Prevent program, which tries to keep people from “being drawn into terrorism.”

For each group or movement it identified, the document asked “Why are they a threat?” For Extinction Rebellion, it answered: “An anti-establishment philosophy that seeks system change underlies its activism; the group attracts to its events school-age children and adults unlikely to be aware of this. While nonviolent against persons, the campaign encourages other lawbreaking activities.”

Below, it adds: “While concern about climate change is not in itself extreme, activists may encourage vulnerable people to perform acts of violence, or commit such acts themselves.”

It is not clear what that refers to. Extinction Rebellion advocates civil disobedience, leading to arrests for disruption, not destruction.

Last April, some of its members stripped down in the visitors’ gallery in Parliament and glued their bare backsides to the bulletproof glass separating them from the startled lawmakers.

Eight activists affiliated with the group were arrested in October on suspicion of obstructing trains after they suspended some underground lines in London by gluing themselves to trains or walking on top of them, enraging morning commuters.

The subway action was one of many during a two-week streak of the organization’s protests in London that saw more than 1,400 activists arrested for, among other actions, shutting down roads and bridges around Parliament.

London’s Metropolitan Police was heavily criticized after announcing a ban on the organization’s protests in the center of the capital — which Extinction Rebellion later defied.

“After nine days of disruption, we felt it is entirely proportionate and reasonable to impose this condition because of the cumulative impact of these protests,” Deputy Assistant Commissioner Laurence Taylor said in a statement in October.

The counterterrorism police guide included assorted white power groups, “extreme satanism,” and Al Muhajiroun, “a proscribed terrorist group seeking the establishment of an Islamic State and Shariah law in the U.K.” In addition to Extinction Rebellion, it lists “animal rights extremism,” warning of people who watch “animal liberation” videos, and who strongly oppose wearing fur, hunting foxes and eating meat. The guide claimed that “activists may encourage vulnerable people to perform acts of violence, or commit such acts themselves.”

But there was less reaction to that part of the brochure than to the inclusion of Extinction Rebellion, which was received with indignation and disbelief.

“How dare they,” Extinction Rebellion said in a statement. “Wouldn’t it be nice if they focused on the real extremists, the fossil fuel companies and those that do their bidding.”

Rob Cooper, former chief superintendent of police in the counties of Devon and Cornwall, said in a statement that he found it “astonishing that police in the Southeast of England regarded Extinction Rebellion as an extremist group.”

Kath Barnes, the head of Counter Terrorism Police South East, which released the document, quickly disavowed it. “We do not classify Extinction Rebellion as an extremist organization,” she said in a statement. “The inclusion of Extinction Rebellion in this document was an error of judgment and we will now be reviewing all of the contents as a result.”

The document also included Animal Rights Extremism as a threat, saying that while animal welfare concern “is not in itself extreme,” acts of violence might be committed or encouraged by activists who are “increasingly targeting a younger, more health-conscious audience for recruitment.”