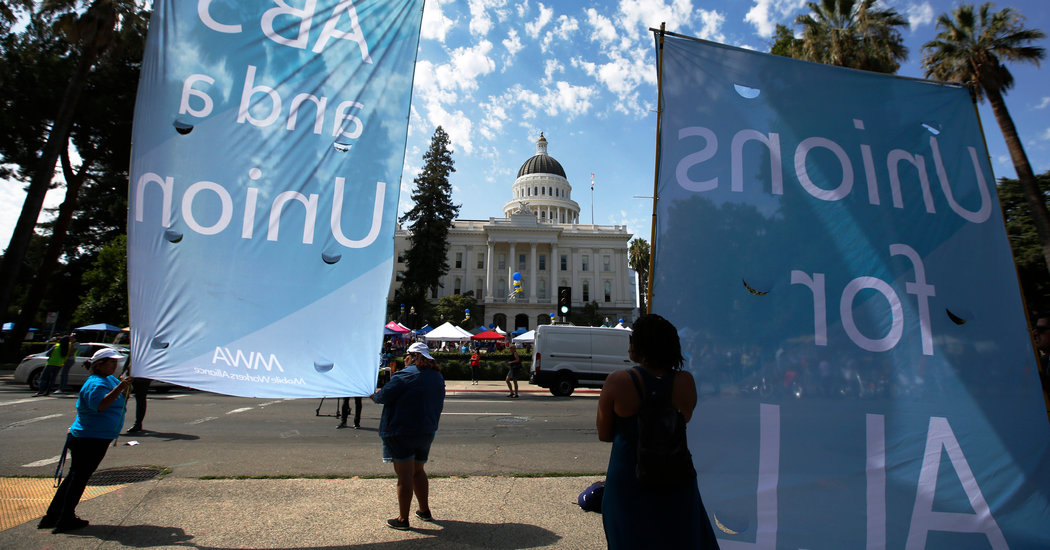 SACRAMENTO — California legislators approved a landmark bill on Tuesday that requires companies like Uber and Lyft to treat contract workers as employees, a move that could reshape the gig economy and that adds fuel to a yearslong debate over whether the nature of work has become too insecure.

The bill passed in a 29-to-11 vote in the State Senate and will apply to app-based companies, despite their efforts to negotiate an exemption. On Wednesday morning, the Assembly gave its final approval, 56 to 15. California’s governor, Gavin Newsom, endorsed the bill this month and is expected to sign it. Under the measure, which would go into effect Jan. 1, workers must be designated as employees instead of contractors if a company exerts control over how they perform their tasks or if their work is part of a company’s regular business.

The bill may influence other states. A coalition of labor groups is pushing similar legislation in New York, and bills in Washington State and Oregon that were similar to California’s but failed to advance could see renewed momentum. New York City passed a minimum wage for ride-hailing drivers last year but did not try to classify them as employees.

In California, the legislation will affect at least one million workers who have been on the receiving end of a decades-long trend of outsourcing and franchising work, making employer-worker relationships more arm’s-length. Many people have been pushed into contractor status with no access to basic protections like a minimum wage and unemployment insurance. Ride-hailing drivers, food-delivery couriers, janitors, nail salon workers, construction workers and franchise owners could now all be reclassified as employees.

But the bill’s passage, which codifies and extends a 2018 California Supreme Court ruling, threatens gig economy companies like Uber and Lyft. The ride-hailing firms — along with app-based services that offer food delivery, home repairs and dog-walking services — have built their businesses on inexpensive, independent labor. Uber and Lyft, which have hundreds of thousands of drivers in California, have said contract work provides people with flexibility. They have warned that recognizing drivers as employees could destroy their businesses.

“It will have major reverberations around the country,” said David Weil, a top Labor Department official during the Obama administration and the author of a book on the so-called fissuring of the workplace. He argued that the bill could set a new bar for worker protections and force business owners to rethink their reliance on contractors.

California legislators said the bill, known as Assembly Bill 5 and proposed by State Assemblywoman Lorena Gonzalez, a Democrat, would set the tone for the future of work.

“Today the so-called gig companies present themselves as the innovative future of tomorrow, a future where companies don’t pay Social Security or Medicare,” said State Senator Maria Elena Durazo, a Democrat. “Let’s be clear: there is nothing innovative about underpaying someone for their labor.”

She added, ”Today we are determining the future of the California economy.”

Ride-hailing drivers hailed the bill’s passage. “I am so proud of ride-share drivers who took time out of their lives to share their stories, stand up, speak to legislators and hope they take a moment to bask in a victory,” said Rebecca Stack-Martinez, a driver and an organizer with the group Gig Workers Rising.

Uber did not immediately have a comment. Earlier on Tuesday, it laid off 435 workers in its product and engineering teams, the company’s second round of cuts in recent months.

Lyft said it was disappointed. “Today, our state’s political leadership missed an important opportunity to support the overwhelming majority of ride-share drivers who want a thoughtful solution that balances flexibility with an earnings standard and benefits,” said Adrian Durbin, a Lyft spokesman.

Gig-type work has been under the spotlight for years as companies like Uber, Lyft and DoorDash in the United States — as well as Didi Chuxing in China and Ola in India — have grown into behemoths even as the contractors they relied on did not receive the benefits or minimum pay guaranteed to employees. Many of the companies have worked assiduously to beat back efforts to classify their workers as employees, settling class-action lawsuits from drivers and securing exemptions from rules that might have threatened the drivers’ freelancer status.

While regulators in California and at least three other states — New York, Alaska and Oregon — had found that ride-hailing drivers were employees under state laws for narrow purposes, like eligibility for unemployment insurance, those findings could be overridden by state laws explicitly deeming the drivers as contractors. About half the states in the nation had passed such provisions.

But more recently, the tide began changing. Two federal proposals introduced since 2018 have sought to redefine the way workers are classified to allow more of them to unionize. Those proposals have received support from candidates for the Democratic presidential nomination, including Senators Kamala Harris, Bernie Sanders and Elizabeth Warren. The presidential hopefuls also lent their endorsement to the California bill.

In Britain, Uber has appealed a decision by a labor tribunal that drivers must be classified as workers entitled to minimum wage and vacation. The country’s Supreme Court is expected to hear arguments in the case next year.

“Some form of benefits to some population of drivers seems inevitable,” said Lloyd Walmsley, an equity research analyst at Deutsche Bank who follows the ride-hailing industry.

A critical question is how gig economy companies will react to California’s new law. Industry officials have estimated that having to rely on employees rather than contractors raises costs by 20 to 30 percent.

Uber and Lyft have repeatedly warned that they will have to start scheduling drivers in advance if they are employees, reducing drivers’ ability to work when and where they want.

Experts said that there is nothing in the bill that requires employees to work set shifts, and that Uber and Lyft are legally entitled to continue allowing drivers to make their own scheduling decisions.

In practice, Uber and Lyft might choose to limit the number of drivers who can work during slow hours or in less busy markets, where drivers may not generate enough in fares to justify their payroll costs as employees. That could lead to a reduced need for drivers over all.

But Veena Dubal, a professor at the University of California Hastings College of the Law, said it would still generally be advantageous for Uber and Lyft to rely on incentives like bonus pay to ensure they had enough drivers on the road to adjust to customer demand much more nimbly than if they scheduled drivers in advance.

“It doesn’t make sense for them” to drastically limit flexibility, she said.

Some of the companies are not done fighting the bill. Uber, Lyft and DoorDash have pledged to spend $90 million to support a ballot initiative that would essentially exempt them from the legislation. Uber has also said it will litigate misclassification claims from drivers in arbitration and press lawmakers to consider a separate bill that could exempt them from A.B. 5’s impact when the legislative session begins in January.

California cities will have ways to enforce the new law. In last-minute amendments to the measure, legislators gave large cities the right to sue companies that don’t comply.

The bill was not universally supported by drivers. Some opposed it because they worried it would make it hard to keep a flexible schedule. After Uber and Lyft sent messages to drivers and riders in California in August asking them to contact legislators on the companies’ behalf, legislative aides said they had noticed a spike in calls.

As the bill wound its way through the Legislature, the ride-hailing companies sought an agreement that would create a new category of workers between contractor and employee. They met with labor groups and Governor Newsom’s office to negotiate a deal to give drivers a minimum wage and the right to organize, while stopping short of classifying them as employees.

But in July and August, labor groups balked, and the proposed deal disintegrated. Some company officials have expressed cautious optimism in recent days about striking a deal with labor after the bill’s passage.