BUEA, Cameroon — A soldier’s crumpled corpse at a traffic circle. Young men gunned down in their living room while partying. A teenage boy killed by a stray bullet while watching television. Outbursts of gunfire so frequent that children call them “frying popcorn.”

The horrors residents recount here at the base of cloud-covered Mount Cameroon are part of a conflict that has been upending the English-speaking regions of this country in recent months.

“This situation, it’s unbearable,” said Leonard Etuge, one of the few holdouts still living in a once-bustling neighborhood along a highway called Mile 16 that is now littered with charred, overturned vehicles and shell casings.

Cameroon is on the brink of civil war. The country is still grappling with a tangled colonial past that involved three European powers — Germany, France and Britain — and in recent years, it has become a vital partner of the United States in the battle against Islamist extremism in Africa.

But longstanding anger at the government has erupted into one of the nation’s biggest uprisings in decades. Separatists are waging a violent battle to break away and form their own country, called Ambazonia. The estimated 2,000 fighters are armed mostly with homemade guns and take orders from activists living overseas.

Known locally as “Amba boys,” the separatists are up against an American- and Israeli-trained elite military force that has been widely accused of human rights abuses. The government crackdown has been ruthless, with residents and local officials providing frequent accounts of troops burning homes and buildings in more than 100 villages, indiscriminately shooting or detaining civilians, and sometimes executing innocent young men as they search for separatists who scurry away into the dense forest after attacks.

Tens of thousands of people have fled English-speaking areas to get away from the violence and about 400 civilians have died, according to an Amnesty International estimate, a figure that doesn’t include security forces and separatists who have been killed in battle.

In the middle of this melee, the country is trying to hold an election. One of the world’s longest-serving presidents, Paul Biya, 85, who has already been in office 36 years, is asking voters to give him seven more on Sunday. Mr. Biya has been in office so long that most of the nation’s population has known no other leader.

Mr. Biya has been traveling the country to rally support in a contest expected to be highly lopsided given his tight grip on the nation. Separatists have vowed to do all they can to disrupt the vote, escalating an already volatile situation. 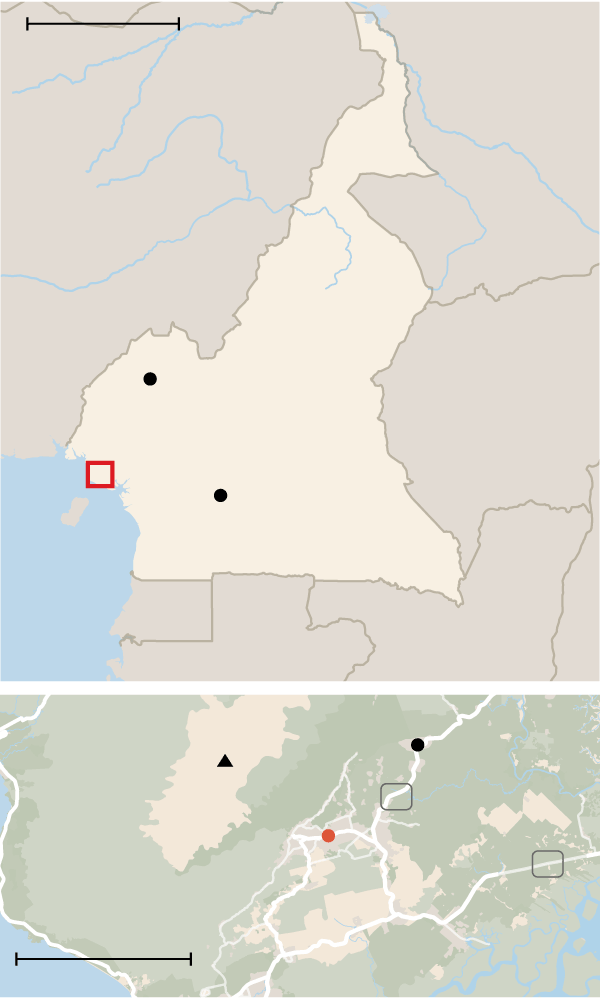 Cameroon is already fighting another war — against Islamist extremists in the region. In the north, Americans have provided the country with military equipment to battle Boko Haram as the war has spilled across the Nigerian border. Mindful of its shaky international reputation, Mr. Biya’s government has hired a Washington public relations firm, after another signed and then quickly dropped him as a client.

But the election will do little to settle the uprising against Mr. Biya in Cameroon’s two English-speaking regions. Turnout in them is expected to be extremely low — largely because few people are left to vote. In some areas, locals officials estimate that more than 90 percent of residents have fled.

Communities like Ekona, a small town near a dormant rubber plantation, have been completely abandoned. Burned homes, crushed tin shacks that housed businesses and a blackened beer truck attest to the fierce battles here. Many of the concrete homes and stores along the road were riddled with large bullet holes.

Ekona had been a flash point of fighting. A military captain blamed the damage on separatists, accusing them of lashing out at residents who didn’t respect their calls to create a “ghost town,” by abandoning the streets and staying home. But local news reports offered a much different explanation: a gun battle between separatists and security forces in June that sent residents escaping into the forest.

English-speaking areas make up a fifth of the population, and with their palm oil, rubber and banana plantations they are a significant contributor to Cameroon’s economy. Most of those operations are now closed because of the violence.

Residents of Anglophone areas began protesting two years ago, saying they were tired of teachers and judges who did not speak English well but were being appointed to their schools and courts nonetheless. After the government’s security forces opened fire on people at rallies, separatists armed themselves.

The protests were part of a broad sense of marginalization that had been mounting since the post-World War I era, when the League of Nations appointed France and England as joint trustees of what was then German Kamerun. Colonialists pushed their own cultures on each region.

Though the nation officially recognizes both languages, Mr. Biya, who governs from the French-speaking capital of Yaoundé, has concentrated power and resources in Francophone areas, while people in Anglophone regions complain bitterly about unpaved roads and a lack of other infrastructure.

The campaign posters of Mr. Biya plastered across the country and T-shirts handed out on street corners only reinforce the gulf between the two sides. In a nod to his experience, one of his campaign slogans is “The Power of Experience.” But for English-speaking voters, the posters translate the slogan awkwardly, saying “The Force of Experience” instead — an ominous echo of the violence being waged in English-speaking areas.

“To make that kind of mistake,” sighed Derick Woteva Wambo, the chief in a neighborhood in Buea, an English-speaking city. “Oh, this whole country.”

Mr. Wambo estimated that only about 10,000 of Buea’s 200,000 residents remain in the city, a normally quaint mountainside area where the violence has been unrelenting. Many fled after episodes like one Mr. Wambo witnessed last week.

At 6:30 a.m. on Sept. 27, he said he was called to a home where he found the bodies of six men strung across a living room, some limp across chairs and one lying by a door as though he was trying to escape. Another body had already been taken to the morgue.

Before they died, the men were having a party, smoking marijuana in the early morning hours and making noise, Mr. Wambo said. He said security forces heard the racket and executed them after deciding they were separatists, who are rumored to be heavy smokers. One of the dead included a neighbor who also heard the noise and decided to investigate, he said.

Mr. Wambo called Buea “paradise” compared with what is happening in smaller villages. He says he has visited them to find rotting corpses and residents terrified that their young men will be mistaken for fighters and killed.

Mr. Biya’s government says the separatists are terrorists and has refused to open any dialogue with them.

As for human rights abuses by government security forces, Issa Tchiroma Bakary, the communications minister, said that officials have been investigating the allegations they hear about.

“It is unacceptable to commit a crime and unlawful killing today, tomorrow or after tomorrow,” he said. “No army in the world is immune against misbehavior in a handful of its elements.”

Separatists in some areas, including the English-speaking city of Bamenda, have blocked roads by felling trees and destroying bridges in an attempt to thwart soldiers from what is expected to be a major offensive. But the actions have also trapped civilians who are desperate to flee.

Some others don’t want to leave. One young man selling fruit on the streets of Buea this week said he knew his age alone made him a target.

For those who have already escaped, their lives have been turned upside down. Many have crammed into homes, like the dank room with only one bed where a man named Justice ended up with his teenage niece and 2-year-old daughter. He ran away from Mile 16 after seeing the corpse of his neighbor, a farmer, caught in the crossfire between separatists and soldiers.

Another man who fled to Yaoundé said he had endured a series of atrocities before finally giving up and packing his family of four into his brother’s living room. Eleven people are now jammed into the small apartment, where he has hung a poster of numbers for his four-year old daughter. She has forgotten how to count to 10 after being out of school for so long.

In Mile 16, schools have been closed for two years. The man, who spoke on condition of anonymity for fear of being targeted, said he had repeatedly run into roadblocks from separatists and shake downs from soldiers who came to homes and helped themselves to laptops, televisions and cash. They even took soda without paying from a 12-year-old girl running a small store near his office, he said.

“We’re working for you,” he said they told her. It was a small thing, but he was outraged.

Then he saw a body floating down a nearby stream, and that of a soldier at a traffic circle.

But what finally pushed him to escape was the aftermath of gunfire as soldiers chased two men on motorcycles firing wildly. One of the bullets entered his neighbor’s living room window and struck and killed a teenage boy watching television.

When asked if he was going to vote Sunday, the man’s eyes widened.

“For what?” he said. “I’ve been voting for years and the results have never changed.”

Thousands Flee in Cameroon as Separatists Battle for New Nation

Shootings on Video in Cameroon ‘May Not Be Isolated Cases,’ U.N. Fears

In Troubled Cameroon, U.S. Envoy Is Accused of Election Meddling

Melania Trump Raises Eyebrows in Africa With Another White Hat

Denis Mukwege: A Sense of Calm Amid the Grinding Work of Saving Lives

C. Payne Lucas, Leader in Aid to Africa, Is Dead at 85

Melania Trump, in Africa (and Far From Washington), Seems at Ease

Why Elephants Don’t Shed Their Skin