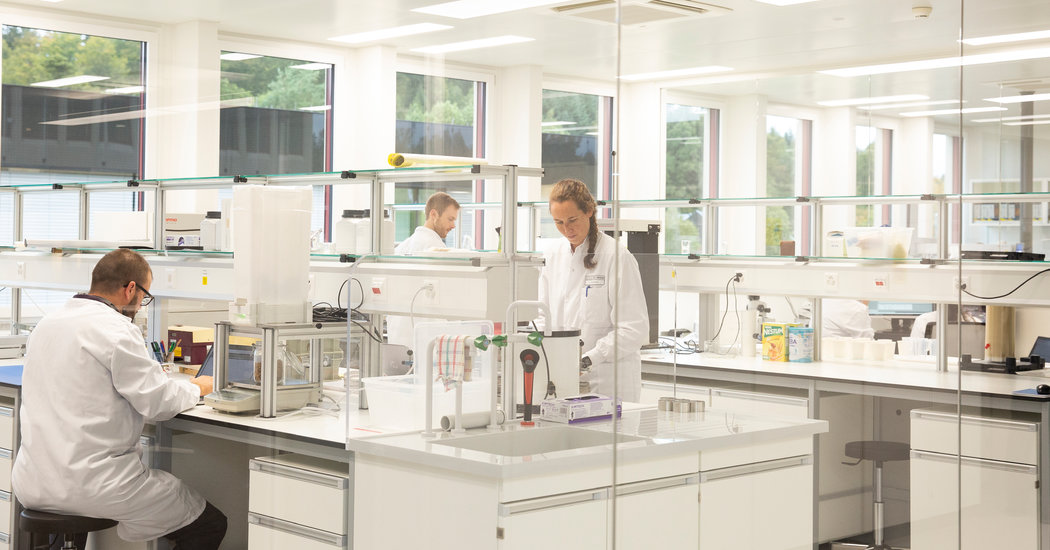 LAUSANNE, Switzerland — Mark Schneider, the chief executive of the Swiss food giant Nestlé, gripped a bun-clad concoction that looked like a bacon cheeseburger but contained no actual bacon, cheese or beef. He took a bite.

It was a faux-meat, dairy-free mouthful symbolizing what may be the future of the food industry. It was also a manifestation of how big corporations like Nestlé are responding to increasingly intense pressure to help fight climate change.

Vegan burgers, Mr. Schneider said, are a response to rising consumer concern about the healthiness of red meat and to criticism that cattle farming is bad for the climate.

“The reason I like the plant-based so much is this is where the two kind of connect,” he said between bites at Nestlé’s research and development center in Lausanne. “There’s an environmental side to it, and there’s a healthy nutrition side to it.”

Nestlé, the world’s largest food company, is in the pincers of both trends. It makes products that permeate daily life around the globe, like baby formula, coffee, ice cream, pet food and bottled water, and activists blame it for draining aquifers, fueling obesity with fatty and sugary foods and littering the world with plastic packaging.

The demands on Nestlé and other corporations are growing as consumers pay more attention to the environmental effect of what they eat. Agriculture accounts for more than a fifth of greenhouse gas emissions, and plastic production and incineration account for an additional 10 percent or so. There is no way to avoid catastrophic climate change without action by the food industry.

Pressure to behave more virtuously has also been coming from investors. Larry Fink, chief executive of BlackRock, the world’s largest investment fund, has put companies on notice that it expects them to serve a social purpose, not just generate dividends for shareholders.

That does not necessarily mean that investors are willing to sacrifice profit for sustainability, Mr. Schneider said. “From the financial results side, people are not cutting you a lot of slack,” he said.

But at least some shareholders have become more willing to take the long view. “To me, the difference is time horizon,” Mr. Schneider said. “Take the burger here. A Swiss franc we spend on developing the burger is a burden to this quarter’s profits. Next year or the year after, it will come back to us if we do our job right.”

Studies support the idea that profit and sustainability are compatible over the long run. Shares of companies perceived as environmentally responsible significantly outperformed shares of companies that were not, according to a study published by Deutsche Bank in September. The same report found that consumers were becoming more likely to base buying decisions on whether they believed brands were kind to the environment.

Jolted by movements like FridaysForFuture, a global climate protest staged by schoolchildren, companies are responding in a way that sometimes feels like panic. Hardly a day goes by without a big corporation’s promising to install solar panels on its factory roofs, buy battery-powered delivery vehicles or finance a reforestation project in Borneo. Increasingly, being green is a commercial imperative.

But corporate history is full of cases where claims to be environmentally responsible proved to be exaggerated if not outright fraudulent. Volkswagen said in 2010 that its goal was to be the most ecologically minded car company in the world. At the same time, Volkswagen engineers were rigging millions of cars to cheat on emissions tests.

During an interview and lab tour that lasted several hours, Mr. Schneider insisted that Nestlé’s commitment to the environment and public nutrition was sincere and longstanding. For example, he pointed out, Nestlé adds iron to Maggi brand bouillon cubes to address a common nutritional deficiency in Africa, where the product is a cooking staple.

“No one asked us to fortify these bouillon cubes,” Mr. Schneider said. “It’s the right thing to do.”

Born in Germany, Mr. Schneider, 54, earned an M.B.A. from Harvard. Before being recruited to Nestlé in 2017, he was chief executive of Fresenius, a health care company in Bad Homburg, a city near Frankfurt. He drives a Tesla and said one of his hobbies was making vegetable drinks.

As part of a companywide campaign to reduce plastic waste, he recently volunteered to help clean up garbage along the Seine in Paris. In September, Nestlé inaugurated the Institute of Packaging Sciences in Lausanne, which has a goal to ensure that all of the company’s packaging will be recyclable by 2025 and that none of it will end up in landfills or floating in the Pacific.

Activists say recycling is not a solution. Experience shows that even recyclable packaging usually winds up being thrown away. Poorer countries lack the necessary infrastructure. The solution is to make packaging reusable, said Graham Forbes, global project leader for Greenpeace’s plastics campaign.

“If they want to remain viable in the future, they need to embrace the direction young people want to go, which is away from throwaway culture,” Mr. Forbes said.

Nestlé’s size and dizzying array of products mean that the company, based on the shore of Lake Geneva in Vevey, is often in the cross hairs of activist groups. Nestlé has more than 300,000 employees, and sales last year were $93 billion. It operates in virtually every country.

One of the biggest knocks against Nestlé is that it promotes obesity in places like Africa, a growth market, by getting consumers hooked on sugary and fatty foods. The company’s products include Nesquik flavored milk powders, KitKat chocolate bars and Häagen-Dazs ice cream.

“In the developing world, the sudden availability of high-calorie, sugary, fatty products has displaced traditional products,” said Oliver Huizinga, head of research and campaigns at Foodwatch Germany, a watchdog group. “That is certainly one reason for the epidemic of obesity and Type 2 diabetes.”

Nestlé, sensitive to the criticism, says it has already cut sugars in its products by more than a third since 2000 and will cut them by an additional 5 percent by next year. It has set similar targets for saturated fat and salt.

At the Lausanne labs, scientists in white coats, working in labs with all-white surfaces, swish colored liquids around in beakers as they search for formulas that preserve taste while reducing sugar, saturated fat and salt.

The company has also promised to add more vegetables and fiber-rich ingredients like nuts, whole grains and beans to its products.

Still, there will always be an element of indulgence in some foods, Mr. Schneider said. “We would be defining food and beverage way too narrowly if you say only what makes you live longer and healthier is good,” he said. “That’s not the reality in which we all live.”

Mr. Huizinga of Foodwatch said corporations were unlikely to ever voluntarily stop selling their most profitable items, and called for restrictions on marketing sugary foods to children and other regulatory measures.

“The state has to act and not wait for Nestlé to someday stop selling unhealthy food,” Mr. Huizinga said.

Bottled water is another business where Nestlé is often on the defensive. The company owns brands including Perrier, San Pellegrino and Poland Spring. Last year, Nestlé’s water business generated almost $8 billion in sales.

But in places like Florida and California, the company has been accused of contributing to the depletion of spring-fed aquifers and selling a public resource at a profit. Bottling water and trucking it to stores are considered per se wasteful in developed countries where the tap water is just fine.

On a rainy morning recently, Cédric Egger, a geological hydrologist who is Nestlé’s corporate water resources manager, led a tour of the hills above the Swiss village of Henniez to demonstrate why he believes the accusations are unfair.

Nestlé acquired the Henniez mineral water brand in 2008 from a family company that had owned it for a century.

“The farmers were suspicious,” said Olivier Mayor, whose land is in the so-called catchment area where rain collects and then, over the course of years, seeps through underground rock to emerge at a spring near the village. “We have been here for centuries.”

But Mr. Mayor said Nestlé worked with him and other farmers to improve their agricultural techniques in a way that also protected the quality of the water.

For example, Nestlé fuels a biogas plant next to the Henniez bottling facility with local manure and spent coffee grounds from recycled Nespresso pods. Farmers use the waste as fertilizer, cutting down on their use of chemical fertilizer.

“This is the water stewardship strategy we are trying to diffuse worldwide,” Mr. Egger said.

He acknowledged that the company had work to do to reduce its impact on the planet. “There is the environmental side,” Mr. Schneider said. “We fully own up and step up to the plate when it comes to that responsibility.”

Nestlé plans to supply the burger to restaurant chains, but has not yet announced any customers. The company is already selling plant-based burgers and other meat substitutes under the Sweet Earth brand in the United States and the Garden Gourmet brand in Europe.

Because cattle and dairy farming are major sources of greenhouse gases, the ersatz meats have the potential to serve the twin ideals of saving the planet and making money.

“Clearly, if we want to feed a planet of 10 billion people in a few decades,” Mr. Schneider said, “having more plant-based alternatives and a more plant-based diet is going to be a big support.”