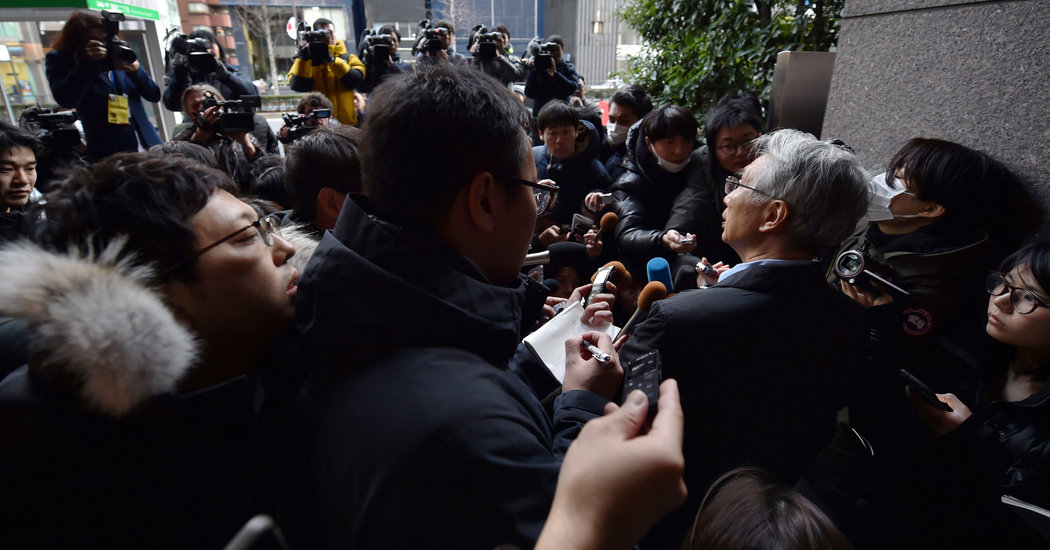 TOKYO — Cameras on his doorstep. Police and reporters watching his every move. Still, one of Japan’s most famous faces gave them the slip.

Carlos Ghosn’s audacious escape from Japan has left the country flabbergasted. Its leaders are responding to questions with official silence. Even his top Japanese lawyer said he was shocked and bewildered when he saw the news on television Tuesday morning.

Mr. Ghosn, the deposed chief of the Nissan and Renault auto empire, confirmed on Tuesday that he had fled Japan to avoid a trial on charges of financial wrongdoing. The auto executive, in a statement, assailed what he described as a “rigged Japanese justice system where guilt is presumed, discrimination is rampant, and basic human rights are denied.”

“I have escaped injustice and political persecution,” he wrote, adding that he planned to tell his story next week.

In the meantime, politicians in Japan wondered whether shadowy figures or even a foreign government were involved. The aggressive local media scrambled for clues.

The confusion extended beyond Japan. An official in Beirut said he entered the country using a French passport, while at least one Lebanese outlet reported, without offering proof, that Mr. Ghosn had been spirited out inside a box meant for musical equipment.

It seems likely that the confusion was a feature, not a bug: Mr. Ghosn’s escape coincided with Japan’s most important holiday, New Year’s Day, when government agencies and most businesses close for as long as a week and airports are packed with travelers — the perfect time to stage an escape.

Government officials said they were trying to establish the facts of Mr. Ghosn’s escape to Lebanon, which has no extradition treaty with Japan.

On Twitter, Masahisa Sato, a member of Japan’s upper house and a former top Foreign Ministry official, asked whether Mr. Ghosn “had the support of some country” in his escape.

“It’s a huge problem that his illegal escape from Japan was allowed so easily,” he wrote.

The former governor of Tokyo, Yoichi Masuzoe, accused the Lebanese embassy of helping to smuggle Mr. Ghosn out.

Apparently caught flat-footed, Japanese prosecutors rushed to ask a Tokyo court to rescind Mr. Ghosn’s bail, according to the national broadcaster NHK, possibly leaving him to forfeit the $9 million that he had paid for the privilege of living outside jail while he awaited trial.

His lawyer, too, seemed dumbfounded by the Houdini-like disappearance.

Mr. Ghosn’s bail conditions barred him from using a phone, and he spent most of his days in his lawyer’s office, the only place he was allowed to use the internet. For months, he had been commuting from his home in an elegant neighborhood in central Tokyo to meet with his lawyers and prepare for his trial.

All the while, a court-ordered camera monitored his doorway, recording his comings and goings. Whenever he went out, he suspected that authorities and private investigators from Nissan followed him around the city, according to people familiar with the matter.

Mr. Ghosn spoke with his wife, Carole, for about an hour on Dec. 24, Mr. Hironaka said. Prosecutors had asked a judge to forbid the couple from contacting each other over concerns that they might conspire to tamper with evidence or witnesses. The court had kept the couple from communicating for months, Mr. Hironaka said, and they had spoken only twice since Mr. Ghosn was rearrested in April.

Nevertheless, Mr. Ghosn stayed in touch with his family. His daughter Maya visited him in Tokyo, according to people familiar with his movements. And his outings with his children would occasionally be reported by the Japanese press or pop up on social media, where commentators speculated about his welfare.

The team had planned to regroup on Jan. 7 for the first strategy session of the new year.

All three of Mr. Ghosn’s passports were in his lawyers’ possession, Mr. Hironaka said. It was one of the conditions of his bail, which his attorneys had only won after repeated, hard-fought attempts to convince the court that their client, with all of his wealth and power, was not a flight risk.

“He left his things here,” Mr. Hironaka told reporters. “I want to ask him, ‘How could you do this to us?’”

“It would have been difficult for him to do this without the assistance of some large organization,” Mr. Hironaka said.

Mr. Ghosn’s defense team had repeatedly spoken out about what they described as a “hostage justice” system, complaining that Japanese courts and prosecutors had put their client at an almost impossible disadvantage as he sought to defend himself.

“I wanted to prove he was innocent,” Mr. Hironaka said on Tuesday. “But when I saw his statement in the press, I thought, ‘He doesn’t trust Japan’s courts.’”

The Japanese media rushed for clues as well, but they were hampered by skeleton staffs and closed government offices ahead of the New Year’s Day holiday. NHK reported that border control officials in Japan and Lebanon had no record of Mr. Ghosn’s leaving the country, speculating that he may have used a fake passport and an assumed name.

He said the Lebanese government wasn’t notified in advance of his arrival, adding, “We were all surprised.”

“The government has nothing to do with his decision to come,” he said. “We don’t know the circumstances of his arrival.”

In France, a deputy minister for economy and finance, Agnès Pannier-Runacher, said she learned about Mr. Ghosn’s flight from news reports. “We have to understand what happened,” she said on France Inter radio.

Mr. Ghosn isn’t above the law, she said, and “if a foreign citizen fled the French justice system, we would be very angry.” But she noted that, as a French citizen, he could use the country’s consular services.

A group of children may have been among the last people to see him before he left Japan, according to a report in The Asahi Shimbun, which described the possible sighting on the morning of Dec. 27 in much the way one would an appearance by Bigfoot or the Loch Ness monster.

“His eyebrows stand out,” the 12-year-old girl told a reporter combing the streets near Mr. Ghosn’s home for clues about his disappearance.

“Everyone was saying to each other, ‘Isn’t that Ghosn?”