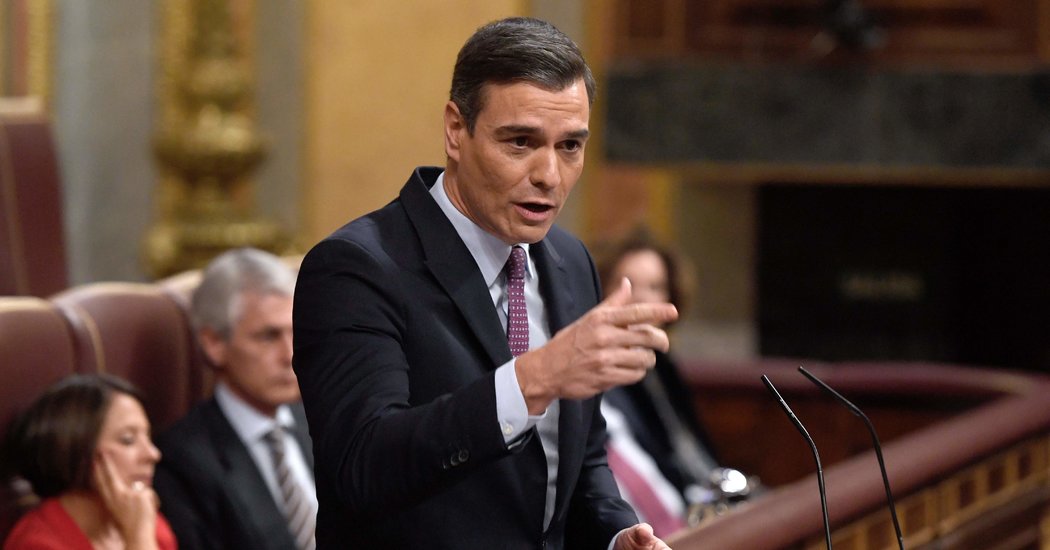 MADRID — Spain’s acting prime minister Pedro Sánchez, seeking Parliament’s backing to form a government, pledged to resolve the Catalan dispute through dialogue as he received renewed support from separatists in the restive region.

As Mr. Sánchez set out his priorities on Saturday in an attempt to end several months of political gridlock, he assured lawmakers that neither Spain nor its constitution would break.

“What is going to break is the blockade of a progressive government democratically elected by the Spanish people,” Mr. Sánchez, the Socialist Party leader, told deputies in opening remarks as he kicked off several days of debates and votes in Parliament.

Earlier this week, Mr. Sánchez and Pablo Iglesias, the head of the far-left party Unidas Podemos, restated their intention to form the first coalition government in Spain’s recent history.

Since the two parties together fall short of a Parliamentary majority, with 155 seats in the 350-member body, victory for Mr. Sánchez hinges on the votes of small regional parties.

Catalonia’s largest separatist party, Esquerra Republicana de Catalunya, or E.R.C., on Saturday confirmed that it would abstain rather than vote against Mr. Sánchez in the second and decisive vote on Tuesday.

The party’s support had been called into question by a last-minute decision by Spain’s electoral board on Friday to block E.R.C.’s jailed leader Oriol Junqueras from becoming a member of the European Parliament.

The board also decided to strip the head of Catalonia’s pro-independence regional chief Quim Torra — an ERC ally — of his position as a regional lawmaker.

On Saturday, the leader of the conservative People’s Party, or P.P., Pablo Casado, said Mr. Sánchez should ensure the decision to unseat Mr. Torra in Catalonia is enforced.

“Surrendering to the worst radicals may make you prime minister, but you will not be able to govern,” Mr. Casado said during the debate.

Tensions over Catalonia highlight the struggles a Socialist-led minority government would have to pass legislation as it would depend on the support or abstention of small regional parties with competing agendas.

A few hundred people joined a rally in Madrid on Saturday calling for a “united Spain” and the leader of the far-right party Vox, Santiago Abascal, demanded that Mr. Torra be arrested. The Catalan Parliament was due to convene for a special session following the electoral board decision.

Mr. Sánchez said he wanted to resume dialogue over Catalonia’s future rather than hammer out the dispute through Spain’s courts, but said he would address the issues within Spain’s constitutional framework.

The constitution prohibits regions from breaking away and the Catalan independence drive, including a banned referendum in 2017, has triggered Spain’s worst political crisis in decades.

Among his priorities, Mr. Sánchez mentioned increases in corporate tax, more worker-friendly labor legislation, fighting climate change and gender equality. He pledged to lift the minimum wage to 60 percent of average national wages by the end of the government’s four-year term.

Mr. Sánchez is not expected to win the first confidence vote on Sunday, in which he would require an absolute majority of 176 members among all 350 lawmakers in the Spanish Parliament. But he aims to win a second vote on Tuesday which would only require him to obtain more votes in favor than against.