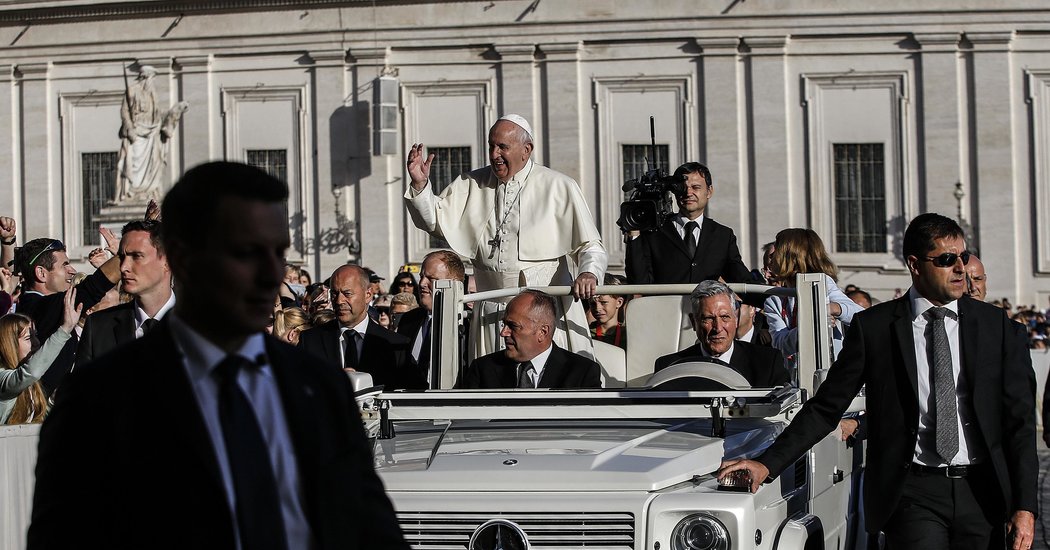 VATICAN CITY — A summit of Roman Catholic bishops meeting at the Vatican recommended on Saturday that Pope Francis allow the ordination of married men as priests in the Amazon region, which would lift a roughly 1,000-year-old restriction and potentially revolutionize the priesthood.

It is the first time a grouping of bishops convened by a pope has endorsed such a historic change to the tradition of a celibate priesthood. The proposal is limited to remote areas of South America where there is a scarcity of priests but could set a precedent for easing the restriction on married priests throughout the world.

If Francis, who has already signaled an openness on the issue, accepts the bishops’ recommendation, he will turn the remote areas of the Amazon region into a laboratory for a Catholic Church looking to the global south for its future, with married priests and indigenous rites mixing with traditional liturgy.

The pope is expected to respond to the proposals by the end of this year.

The final document of the summit, noting that many of the faithful in the Amazon region have “enormous difficulties” in receiving communion and seeing a priest, proposed to “ordain priests suitable and esteemed men of the community,” who had already had “fruitful” experiences as deacons and who “receive an adequate formation for the priesthood, having a legitimately constituted and stable family.”

“No priest is ordained without first being a deacon,” Cardinal Michael Czerny said at a news conference Saturday night. He characterized the entirety of the proposals as a great “pastoral change” for the church.

Liberal supporters said the change would address the unmet needs of a far-flung community and they expressed hope it would lead to similar changes elsewhere. Conservative opponents called it a threat to the tradition of the priesthood, another troubling sign Francis was willing to dilute the faith to pursue a more inclusive, but less pure, church.

The proposal came from the Special Assembly of the Synod of Bishops for the Pan-Amazon Region, a three-week meeting of bishops dedicated to “new paths” in the Amazon that has covered topics as varied as the environment and the possible ordination of women as deacons.

The bishops did not vote to allow women to become deacons in the church, a change that, if accepted by Pope Francis, would have had significant theological repercussions.

Instead, Francis said in remarks to the bishops after Saturday evening’s vote that the Vatican would continue to study the role of women in the early years of the church.

“We still haven’t grasped the significance of women in the Church,” he said. “Their role must go well beyond questions of function.”

Francis convened the bishops to find ways to defend the rights, natural resources and cultures of the 2.5 million indigenous people spread across the nine countries — Bolivia, Peru, Ecuador, Colombia, Venezuela, Brazil, Guyana, Suriname and French Guiana — that constitute the Amazon region. The bishops emphasized more respectful ways of “pastoral conversion” and urged the promotion of new churches “rooted in the cultures and traditions.”

But the meeting, which followed a broad survey of Catholics in the region, created high tension around the issue of blending Catholic and indigenous rites. Those tensions burst into the open on Monday with the theft and vandalism — technically unclaimed but apparently by Catholic traditionalists — of indigenous sculptures from a church being used by indigenous Catholics in Rome.

But the biggest change was the easing of the celibacy requirement.

In responding to a longstanding concern about the dearth of priests in a region where competition from evangelical Protestants is increasingly strong, 181 voting bishops and other prelates recommended that the church ordain to the priesthood older men of proven character. Only ordained priests can perform the most central sacraments, such as celebrating Mass and hearing confession.

Pope Francis, who has argued that the hierarchy should listen more to local bishops, will now take the recommendation into consideration. He is expected to issue his own document, one that could change church teaching on the issue.

In the past, the pontiff has expressed openness to discussing controversial issues. In 2014, he said the “door is always open” to discussing celibacy in the priesthood. And he has used conservative language to argue for what many liberals consider a pragmatic response to a lack of priests, framing it as a question of providing sacraments to the faithful.

In a homily at the opening of the synod, Francis said, “If everything continues as it was, if we spend our days content that ‘this is the way things have always been done,’ then the gift vanishes, smothered by the ashes of fear and concern for defending the status quo.”

His bishops apparently got the message.

Opponents said it was a radical departure from church tradition and an abasement of the priesthood. Cardinal Marc Ouellet, the prefect of the Vatican’s office for bishops, wrote in a new book that indigenous people welcomed clergy into their communities “precisely because of their celibacy,” and that easing priestly celibacy could ultimately be “counterproductive for evangelization.”

But in the days leading up to the meeting, and throughout its debate, many voices in the church hierarchy argued that the time had come to explore the lifting of celibacy. Erwin Kräutler, an influential retired bishop who once led the Amazon diocese of Xingu, Brazil, said that he estimated that two-thirds of the bishops in the Amazon region were in favor.

“The indigenous people don’t understand celibacy,” he asserted. “They say that very openly, and I see it. When I go to an indigenous village, the first thing they ask is ‘Where is your wife?’ And I tell them, ‘I don’t have one.’ Then they look at me with pity.”

In remote areas of the Amazon, there are about 8,000 Catholics for every priest, and the faithful might not see a priest for months.

Cardinal Beniamino Stella, the Vatican’s prefect of the office of the clergy, has said that ordaining married men could address that “sacramental emergency.” At a news briefing on Thursday, however, he also emphasized that he believed celibacy was a gift worth protecting.

Married men already serve as priests in the Eastern Catholic Churches that are loyal to the pope in Lebanon, Ukraine and elsewhere. (They cannot serve as bishops.) And Anglican priests who convert and are ordained in the Catholic Church can remain married.

But generally speaking, for about 1,000 years, the Catholic Church has banned marriage for its priests and demanded celibacy, though it is not a requirement of Catholic doctrine.

In the early days of the church, married men often became priests, though they sometimes ceased having sex with their wives, an extension of what historians say was the abstinence required of Jewish priests before entering the sacred Temple. Over time, ordination was increasingly seen as marriage to the church, and St. Paul’s First Letter to the Corinthians was often cited in support of celibacy.

In the Middle Ages, when married aristocrats with children filled the ranks of bishops and cardinals, fatherhood became a financial concern for the church. Priests who bequeathed property to their sons presented a risk that church property would be lost. Popes in the 11th and 12th centuries insisted on abstinence.

That rule stayed on the books for a millennium, though the social upheavals of the 20th century, and the exodus of men from the priesthood, prompted a reconsideration during the Second Vatican Council of the 1960s.

In a 1967 encyclical titled “Priestly Celibacy,” Pope Paul VI defended the practice, writing that priests should try to imitate the “total dedication” of the unmarried Jesus, and that celibacy fortified pastoral ministry and served as a model of selflessness. The question was practically forbidden under the conservative papacies of John Paul II and Benedict XVI.

But Francis, whose inclusive approach has infuriated conservatives, has allowed such questions to be explored.

The idea of ordaining “elders” to the priesthood to give the faithful access to the sacraments was promoted by the retired bishop Fritz Lobinger, now 90, who spent his career in remote areas of South Africa. In January, Francis cited Bishop Lobinger’s books arguing for married priests, which acknowledged that “it will be a step of enormous proportions” and would naturally lead to a discussion of ordaining women.

The bishops’ document also called for greater adaptation of local rites into Catholic celebrations, another development that conservatives view as anathema.

At the beginning of the meeting, conservatives complained that Francis had presided over a prayer service with indigenous people that featured what they considered to be pagan idols of naked, pregnant women.

The conservative criticism grew more intense during the month, and before dawn on Monday, thieves stole the fertility statues from a church near St. Peter’s Basilica that had become a makeshift headquarters for the indigenous attendees, many of whom wore headdresses and traditional clothes mocked by the conservatives.

The thieves then filmed themselves chucking the statues into the Tiber River. A conservative American author, Taylor Marshall, announced the act “with great joy” and posted the video on Twitter, where it was spread swiftly and applauded by conservative outlets.

Even the former prefect for the church office on doctrine, Cardinal Gerhard Müller, seemed to take the side of the vandals.

“The great mistake was to bring the idols into the church, not to put them out,” he told the conservative American Catholic television channel EWTN. “Because according to the law of God himself, his First Commandment, idolatry is a grave sin. And not to mix them with the Christian liturgy.”

“It was painful,” said the Rev. Eleazar López Hernández, a Catholic priest belonging to the indigenous Zapotec people. He said the vandals were “the fruit of a church” that had been closed to change and that had kept “the same attitude for the last 500 years. But the majority of the people in the bishop’s meeting have a different attitude.”

Francis asked “forgiveness” from anyone offended by the theft. And earlier in the month, after a man from the Amazon was mocked for wearing feathers on his head during a papal Mass, the pope, addressing the assembly of bishops said, “Tell me, what difference is there in having feathers on your head and the three-cornered hat worn by some officials.”