CHEMNITZ, Germany — Waving German flags, with some flashing Nazi salutes, the angry mob made its way through the streets, chasing after dark-skinned bystanders as police officers, vastly outnumbered, were too afraid to intervene.

A Syrian refugee and father of two, Anas al-Nahlawie, watched horrified from a friend’s fourth-floor balcony. They were hunting in packs for immigrants just like him, he said. “Like wolves.”

For a few perilous hours over two days this week, the mob owned the streets of Chemnitz, where anger exploded after word spread that an Iraqi and a Syrian asylum seeker were suspected in a knife attack that killed a German man early Sunday.

Chemnitz, a city of some 250,000 in eastern Germany, has a history of neo-Nazi protests. Usually they draw a few hundred from the fringes of society — and far larger counter-demonstrations, city officials say. The crowd this time was 8,000-strong. Led by several hundred identifiable neo-Nazis, it appeared to be joined by thousands of ordinary citizens. More marches are planned Saturday.

The city had never seen anything like this — and, to some degree, neither had post-World War II Germany. The rampage now stands as a high-water mark in the outpouring of anti-immigrant hatred that has swelled as Germany struggles to absorb the nearly one million asylum seekers who arrived in the country after Chancellor Angela Merkel decided to open the borders in 2015.

That decision sharply divided Germany, with critics soon arguing that Ms. Merkel’s administration had lost control of the situation. Three years later, what the government is struggling to control is an anti-immigrant backlash.

Neo-Nazis are growing bolder and stronger, and they are better organized, officials and sociologists say. The far-right Alternative for Germany party is a growing power in Parliament — another shock to the system — and has started to normalize angry sentiments about immigrants that before would not have been uttered aloud, bringing them into the mainstream.

“They are challenging our democratic state in a way they have not done before,” said Barbara Ludwig, the mayor of Chemnitz, a Social Democrat, sitting in her second-floor city hall office one recent morning. “We must pass this test.” 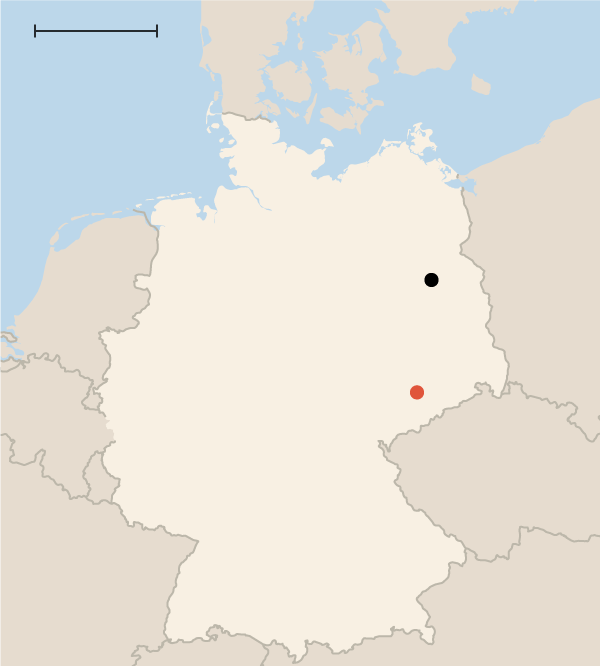 That is precisely what the groups behind this week’s disorder see: A pivotal moment they want to use to change the direction of Germany.

Just as the death of a student demonstrator in 1967 set off widespread rioting and ultimately a student revolt that marked the beginning of the liberal progressive era in West Germany, the murder in Chemnitz would mark the beginning of a period of far-right resistance, he predicted.

And just as in 1989, when thousands — including his own parents — took to the streets to demand the end of Communism, this week’s marches were aimed at bringing down a “failed system,” he said.

Mayor Ludwig says the comparison hurts. She, too, marched in 1989. “But we marched for law and order, for democracy, for freedom of speech,” she said. “They want to undermine all of these institutions and are instrumentalizing people’s grief over the terrible murder of a young man.”

A thriving industrial hub in the 19th century, Chemnitz was badly damaged during World War II, then rebuilt as a model socialist city under East Germany’s Communist regime and temporarily renamed Karl-Marx-Town.

The 7-meter-tall bronze head of Marx in the city center was once a rallying point for demonstrations that took place each Monday to demand the end of Communism; this week it was the rallying point of the far right.

Neo-Nazis have a long tradition of holding demonstrations in Chemnitz, the mayor said. For years they would take to the streets on March 5, mourning the day the city was bombed by allied forces in 1945. “But they were always in the hundreds, and the counter-demonstration was always bigger,” Ms. Ludwig said.

This week was different.

“This mix of far-right extremists and AfD voters was new,” said Hajo Funke, a political scientist at the Free University of Berlin and a veteran expert of the far right.

The Alternative for Germany garnered 27 percent in the eastern state of Saxony, where Chemnitz is located, in last year’s national election. Empowered by that success, far-right activists have been able to channel the fears and discontent of voters and, often using social media, mobilize crowds that a few years ago would have been unthinkable, Mr. Funke said.

The events in Chemnitz, analysts say, showcase the symbiotic relationship between the neo-Nazis and the Alternative for Germany, which officially distances itself from such groups.

The party has done a lot to normalize the language of the far right. If the slogans heard on the streets of Chemnitz this week — from “lying press” to “Germany for the Germans” — have lost their shock value, it is because variations of them are now regularly heard in Parliament.

“We have a strong neo-Nazi scene in eastern Germany, but we also have a strong current of far-right extremism in all of Germany — not just in Parliament but in society,” said Matthias Quent, who runs an institute that studies democracy and civil society in the eastern state of Thuringia.

That is why the far right is so self-confident, he said: “They think their day has come.”

Social media played a significant role in mobilizing the mobs.

Within hours of the stabbing last Sunday, soccer hooligans with links to the neo-Nazis posted an appeal online: “Let’s show together who has the say in this city.”

Soon rumors started circulating. The victim had been defending a woman who had been molested by the killer. A second victim had died in hospital. Neither was true. But within a few hours, some 800 protesters were on the streets, outnumbering the police 10 to one.

The AfD was quick to chime in. “When the state can’t protect its citizens anymore, the citizens take to the street and protect themselves,” Markus Frohnmaier, a lawmaker for the party, said in a Twitter post. “Today it is a citizen’s duty to stop the deadly ‘knife migration!’ ”

On Monday, the number of protesters grew tenfold, again catching the police unprepared and again making national headlines with riotous scenes of street battles. Another march on Thursday was much smaller, and largely calm, after the local police were reinforced with federal units.

The mass mobilizations highlight worrying new gains for an extremist fringe that for many years was underestimated and — some say willfully — neglected by the German authorities.

The feeling of insecurity was palpable this week in Chemnitz across neighborhoods and communities.

At the scene of Sunday’s murder, a stone’s throw from City Hall, Wolfgang Grosser, 61, and his wife, Sabine, were lighting a candle. They had known the victim. He was a friend of their son’s, and once helped them move house.

“He did not deserve this,” Mr. Grosser said. “He was the nicest possible human being.”

“We don’t feel safe in our own city anymore,” he said to the bitter nods of bystanders.

“No one bothers calling the police anymore,” Mr. Grosser said. “They are totally overwhelmed and don’t come anyway. So what’s the point?”

It is a feeling shared by refugees in Chemnitz.

Mahmoud, a 19-year-old Syrian, who declined to give his last name for fear of being targeted by the far right, said the manhunts witnessed on the streets of Chemnitz in recent days were “nothing unusual.”

“I have been chased before, and so have my friends,” he said. “Once we called the police, but nothing happened. So the next time we didn’t.”

Some accused the authorities of leaking sensitive information about the suspects to the far right. On Tuesday night, the arrest warrant for one of the murder suspects was posted online by three far-right groups. It gave the full names of the suspects, the victim, witnesses and the judge involved.

On Thursday, a corrections officer admitted to sending the warrant to Pro Chemnitz, according to the German media, and was suspended from his duties.

After the first round of violence on Sunday, refugee organizations warned migrants to stay inside.

Mr. Nahlawie said he had heeded the call. But one of his neighbors, a Bulgarian, did not. He was sitting in a cafe with his family on Sunday afternoon, he said, when he suddenly found a knife at the back of his neck.

Still, Mr. Nahlawie says, he worries. When he fled the war in Syria in 2015, he took his wife and young children to Germany — and to safety. Or so he thought.

“I’m again afraid for my family,” he said.

A version of this article appears in print on , on Page A1 of the New York edition with the headline: Mob Protests in Germany Show Vigor of Far Right. Order Reprints | Today’s Paper | Subscribe