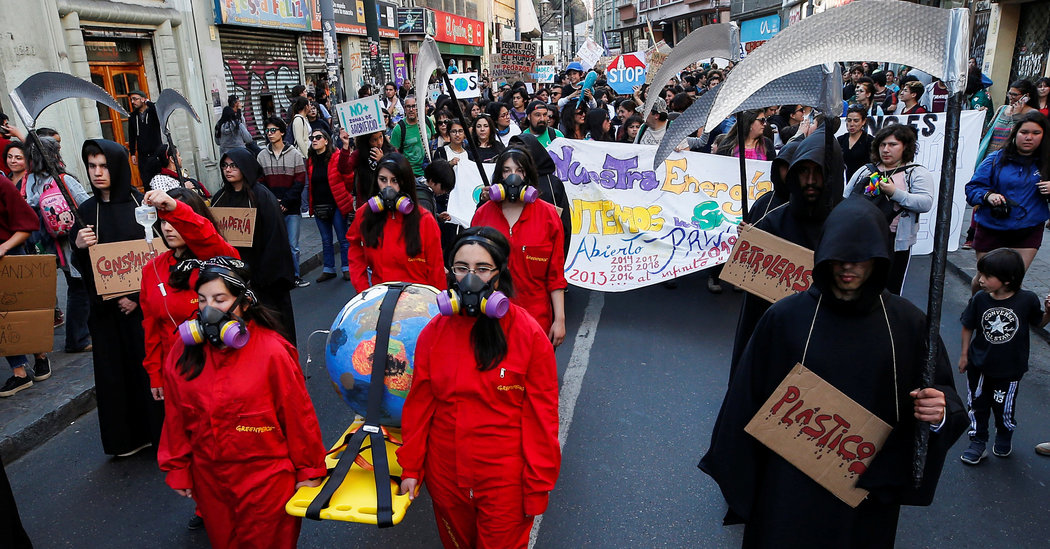 Want climate news in your inbox? Sign up here for Climate Fwd:, our email newsletter.

President Sebastián Piñera of Chile said on Wednesday that his country, which has been rocked by a wave of recent protests, would back out of hosting two important international events: a United Nations climate change meeting and a major Asia-Pacific trade summit later this year.

Chile’s abrupt withdrawal as a host upended plans for an expected meeting between President Trump and President Xi Jinping of China, who had both been scheduled to attend the trade summit in mid-November. Mr. Trump and his advisers had indicated they intended to sign a preliminary trade deal at the summit.

Chile’s cancellation also left the United Nations scrambling to organize the next round of climate negotiations, which had been planned for early December.

The announcement underscored how destabilizing the protests and acts of vandalism have been for Chile, which has long been regarded as an exemplar of stability in a tumultuous region.

In a speech at the presidential palace on Wednesday morning, Mr. Piñera cited the “difficult circumstances that our country has experienced” to explain why Chile would not be able to host the events. “Our first priority as a government is to focus first and foremost on fully restoring public order and social peace,” he added.

Canceling the climate meeting leaves organizers with a tight window to find a new venue capable of hosting the estimated 20,000 delegates expected to attend the next round of climate negotiations.

Chile stepped up to host the Climate Change Conference after the initial host, Brazil, pulled out last year. Brazil’s decision came soon after the election of President Jair Bolsonaro, who does not regard climate change as a dire threat to humanity.

Chile’s withdrawal was unlikely to doom the landmark Paris accord of 2015, which was already facing challenges because of the Trump administration’s expected decision to formally withdraw from the pact.

Patricia Espinosa, the head of the United Nations climate change agency in Bonn, Germany, said her office had heard from Chile’s government shortly before the announcement from the presidential palace in Santiago. “We are currently exploring alternative hosting options,” she said in a statement.

Her office said this was the first time in the quarter-century of United Nations-sponsored climate negotiations that a host country had canceled so close to the event. The office was weighing whether the meeting could be held elsewhere in December or whether it would have to be postponed until January.

For Mr. Trump and Mr. Xi, the meeting of the Asia-Pacific Economic Cooperation group was an opportunity to settle a monthslong fight over tariffs that has rippled across the global economy.

The forum was considered a likely setting for Mr. Trump to sign an interim trade deal with China that would lower some of the tensions in a trade war that has battered stock markets and companies around the world. The trade deal, which is still being finalized, would prevent future tariff increases and lock in intellectual property protections in China, as well as ensure Chinese purchases of American agriculture.

“As you know, we’re going to be in Chile together for a big summit,” Mr. Trump said on Oct. 11, about signing the accord. “And maybe it’ll be then, or maybe it’ll be sometime around then.”

Chile’s cancellation could delay that signing while the leaders look for another venue to meet.

A White House spokesman, Hogan Gidley, said in a statement that the administration intended to finalize “Phase One of the historic trade deal with China within the same time frame.”

The turmoil in Chile, which began Oct. 18, with protests over a modest hike in the Santiago subway fare, has spiraled into violent clashes between security forces and demonstrators. Looting and arson soon spread across the capital, prompting Mr. Piñera to declare a state of emergency and ask the armed forces to restore order.

That step did not defuse the tension. Chileans continued to take to the streets in large numbers and the protests turned into a broader moment of reckoning over what protesters called the country’s entrenched inequality and an economic model that has kept pensions and wages low as the cost of utilities and other everyday expenses have risen.

In response, Mr. Piñera put forward a reform package that includes higher taxes for the rich and a series of wealth redistribution policies. On Monday, he dismissed several ministers as he sought to convince Chileans that the government was taking their grievances seriously.

The scenes of mayhem in Chile in recent weeks are strikingly at odds with the image the country has painstakingly built over the years. Since Chile’s 17-year dictatorship ended in 1990, the country has experienced steady economic growth, which has made its citizens among the most prosperous in South America. Its democracy is regarded as among the most resilient in the region.

And the climate meeting was an opportunity for Mr. Piñera to present Chile as a leader in confronting global warming. Unlike his counterpart in Brazil, Mr. Piñera had committed his country to taking ambitious climate action, pledging to close a number of coal-fired power plants and quit coal completely by 2040. Chile was also among roughly four dozen countries that said it would reduce their net carbon emissions to zero by 2050.

Santiago, in particular, had rapidly grown its electric bus fleet, and Mr. Piñera had said earlier this year that a vast majority of the city’s buses would be electric by 2022. That would make Chile’s electric bus fleet the second largest in the world, after China’s.

Chile will continue to serve as the president of this year’s climate talks, even as it withdraws from hosting it.

The climate meeting had been expected to draw delegations from around the world, as well as the teenage climate activist Greta Thunberg, who last month used the platform of the United Nations to excoriate world leaders for taking insufficient action to curb climate change.

“So happy to say that the following weeks I’ll travel slowly through the North American continent, moving southwest and then eventually through South America toward Santiago,” she wrote on Facebook in late September. “I will stop on the way and visit as many places as I can, and of course protest every Friday no matter where I am!”