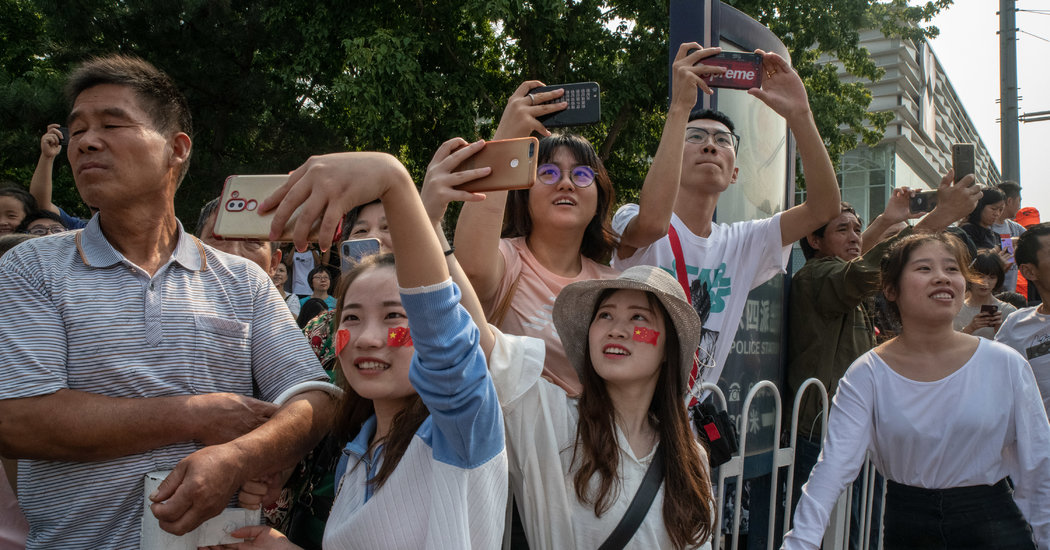 Lu Yingxin has been singing “My People, My Country” for the past week. An earnest propaganda anthem from 1985, the song typically wouldn’t stand a chance against Taylor Swift, K-pop and other modern tunes the 18-year-old college student and her friends like to listen to.

Then, on Sunday, Ms. Lu and her roommates saw a hit Chinese movie of the same name. It depicts major events in recent Chinese history — its first nuclear bomb test, the Hong Kong handover from Britain and the Beijing Olympics, among others — through the eyes of ordinary people.

Its theme song is a polished cover of the 1985 version, sung by Faye Wong, the breathy Chinese superstar. It left them in tears, Ms. Lu said.

Then they shed more tears while watching Tuesday’s parade in Beijing celebrating the 70th anniversary of the founding of the People’s Republic of China, a procession replete with images of progress and sacrifice.

It’s easy to dismiss this outpouring of patriotism as evidence of the Communist Party’s successful brainwashing of the Chinese people, or as a result of heavy surveillance and heavy-handed tactics against dissenters.

The truth is more complex. The Communist Party indeed doesn’t hesitate to use state power to tell the Chinese people how they should think. But the displays of patriotism, especially from young people, also show that the party’s propaganda machine has mastered the power of symbol and symbolism in the mass media and social media era.

That’s why Ms. Lu can’t stop singing a song she first learned in a patriotism class in her elementary school.

“It was beautiful. But it was also part of the patriotism education, so it felt forced,” she said. “After I watched the movie and the military parade, I sang it from the bottom of my heart.”

Beijing may be still struggling to influence the outside world more effectively, but at home it has learned how to compete with short videos, Hollywood movies and mobile games for the public’s attention span. While imposing tight censorship, the Communist Party has also learned to lean on the most popular artists and the most experienced internet companies to help it instill Chinese with patriotic zeal.

So many people rushed to add a national flag logo to their profile photos on the WeChat social media platform that the webpage crashed. On Douyin, the Chinese version of the short-video platform TikTok, China’s biggest entertainment stars and ordinary people alike posted videos of themselves cupping their hands into a heart shape over their chests. The “My People, My Country” music video has been played 73 million times on Tencent Video, one of three big video sites.

“Even discounting some people who hide their negative opinions of the regime, the level of support for the party state is still very high, compared with other countries,” said Dali Yang, a professor of political science at the University of Chicago.

There are a number of other factors, including the unrest in Hong Kong. Angry demonstrators showing their dislike of the Chinese government have left many people in China feeling both defensive and proud of their country’s accomplishments.

And broadly speaking, Chinese people have reason to be proud of their accomplishments. In 40 years, they have lifted their country out of poverty while avoiding the wars and unrest that have plagued much of the developing world. Modern China has its problems, but most Chinese believe it is still vibrant and full of opportunity.

The Communist Party has tapped into that sentiment, and has been successfully blurring the line between love for the country and love for the party. For the first time, the flags of the Communist Party and the People’s Liberation Army appeared in the military parade along with the national flag. In fact, the party’s flag marched ahead of the national flag.

To blur those lines, the party has turned to potent symbols for the internet age.

Its propaganda symbols of old included Lei Feng, a selfless soldier who died in 1962 at the age of 21 after being struck by a falling utility pole.

Today’s version of Lei Feng is Azhong, a clean-cut cartoon character. The People’s Daily, the Communist Party’s official newspaper, created Azhong, a boy from a poor family who is ridiculed by classmates. But he works hard and becomes a top student. Then it compares Azhong to China, saying it also rose from backwardness to power despite victimization, in the country’s case by foreign forces.

“He is China,” the cartoon declares. (His name also translates as “China,” in case anybody might miss the symbolism.)

Chinese online users began using the nickname while they waged digital war against young Hong Kong protesters on Facebook and Instagram in August. Then the Weibo account of the Communist Youth League, the party outreach arm to young people, picked up the nickname and made it bigger.

The Chinese internet has proved to be a fruitful place for the party to spread its message. A mobile game developed by the People’s Daily and Tencent, the Chinese internet giant, was the most popular free app on Apple’s China store last week, for example. Players compete to see who can build better cities while executing the party’s key policies, such as poverty alleviation and low-carbon transportation.

The “My People, My Country” film shows how far propaganda has come.

A decade ago, “The Founding of a Republic,” the first in a trilogy of patriotic films about China’s birth, played to mostly unimpressed audiences. They were so disliked that Douban, a Chinese film review site, disabled its ratings for those titles.

Yan Feng, professor of Chinese literature at Fudan University in Shanghai, wrote on his Weibo social media account that “My People, My Country” is the best revolutionary-themed film in China’s history.

“After 70 years,” he wrote, “our culture and propaganda departments finally figured out how to combine propaganda with art.”

Clarence Lu, a 24-year-old blogger in Guangzhou, watched the movie twice in two days. The characters were flawed human beings instead of the epic heroes one usually sees in patriotic films, he wrote in a social media post.

“I have to admit that our country is getting much better at communicating with us, in ways we like,” Mr. Lu said in an interview. “I didn’t realize that I accepted the patriotic education until after I liked and shared the song.”

China certainly didn’t invent tug-at-the-heart patriotism, as anybody who has seen “Saving Private Ryan” can attest. The difference is that the Chinese government is playing an active role in creating media like “My People, My Country.”

The movie was co-produced by the state-owned Huaxia Film Distribution. Huang Jianxin, the film’s main producer, told Chinese media that he received a notice from “relevant government department” a year ago about making a film about the 70th anniversary.

In fact, the party’s central publicity department took over film regulation in China last year from a government agency, giving the party direct control of what appears in Chinese theaters. That will ensure that no historical films in China will depict some of the most disastrous events in the country’s collective memory, like the Cultural Revolution or the 1989 Tiananmen Square crackdown.

Much of China’s success on the propaganda front still comes from silencing critics. A 24-year-old man in the southwestern Sichuan Province is serving a seven-day police detention for bad-mouthing the military parade on social media last weekend, according to the local police.

Mr. Lu, the blogger, said that he wrote his article because he couldn’t figure out why many people became so patriotic all of a sudden.

“When I was growing up, it was considered uncool to be overtly patriotic and take photos with the national flag,” he said. “Not anymore.”