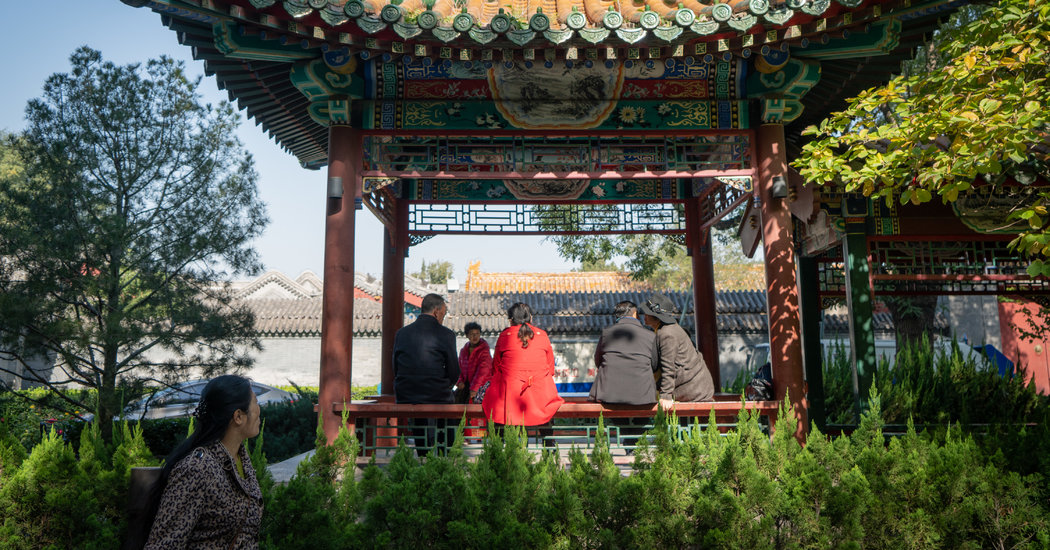 BEIJING — Zhao Lin had become accustomed to the single life. But his days and nights were growing lonely, and he decided it was time to find Ms. Right.

That’s how the 78-year-old ended up at the park.

“I have been looking for more than a year,” said Mr. Zhao, a fixture at one of the dozens of senior singles scenes popping up in public parks around China. So far, he admits, the pickings have been slim.

“It’s usually one conversation and that’s it,” said Mr. Zhao, a widower since 1971, in a lament familiar to frustrated singles no matter their age. “There’s no second time. They’ll let you down and there’s no hope. So what’s the point?”

Three decades of economic growth and social change have transformed attitudes of love and sex among China’s elderly. Increasingly single and assertive, the country’s lonely seniors are on the market.

But in China, none of those venues holds the same appeal as the local park.

In Beijing, the elderly have picked Changpuhe and the Temple of Heaven. The southwestern municipality of Chongqing has a “matchmaking corner” in Hongyadong Park. In the northern city of Xian, elderly residents gather every Wednesday and Saturday at Revolution Park.

“My American colleagues, when they go to China, they are amazed at how many people are socializing in a park,” said Bei Wu, director of global health and aging research at New York University, who has studied China’s elderly for 30 years.

“It’s a practical way for a group gathering,” Dr. Wu said. “In the park, you can increase the chance of having successful blind dates.”

Demographics is behind it all.

An aging population means more people are outliving their spouses. The number of widows and widowers totals nearly 48 million, according to a study by the government research group Chinese Academy of Social Sciences. The group projects that number will rise to 118.4 million by 2050.

And four out of five widows and widowers want to remarry, according to the People’s Daily, the official newspaper of the Chinese Communist Party, citing a survey by Chinese Academy of Sciences.

Others are choosing to leave their spouses. In Beijing, nearly one-third of divorce cases were filed by people aged 60 to 70, according to the Beijing Evening News.

The growing population of elderly singles has public health implications. H.I.V. infection rates are rising among elderly Chinese because many do not practice safe sex, according to the Chinese Center for Disease Control and Prevention. Cases among Chinese men aged 60 and older have nearly tripled since 2012, it said.

That lack of knowledge is understandable. When China’s elders were young, talking about sex was taboo. People met their prospective spouses through friends or matchmakers. Dating was almost unheard-of.

In China’s parks, that can make for awkward scenes. On a recent Tuesday in Changpuhe, a strip of greenery next to the Forbidden City, elderly men clustered together, scoping out the women and men milling around like wallflowers. Several of them strolled up and down, waiting to make eye contact with women.

An elderly man sat next to a woman in a purple jacket for a few minutes. Then, he leaned in to ask: “How old are you?”

“Seventy-two,” she answered in a soft voice. Minutes later, they struck up a conversation.

Many complained of some unique, only-in-China criteria for finding a mate. Pensions and health insurance can enhance attractiveness, for example, in a country where getting cancer can lead to bankruptcy.

The widowed were more desirable than the divorced, said some. Less emotional baggage, they explained.

“Looking For A Soulmate,” read a wrinkled brown sheet of paper stuck on a rock under the trees, one of several ads placed around the park. “Male. Born in 1949. Divorced. No responsibilities.”

The sign was written by a Mr. Li, whose wish list for a wife was that she be roughly 5 feet tall, weigh between 130 to 150 pounds, be between 50 to 60 years old and have unblemished skin. “No black moles,” it warned.

In return, Mr. Li promised to bequeath his 1,100-square-foot apartment to any woman “willing to accompany me till the end of my life.”

Another advertisement placed by a male suitor pledged a life of travel and a commitment to buy property in the southeast coast of China, the United States and Japan.

Guan Yongnian, an 82-year-old divorced man, sees himself as a catch. He is healthy and successful, a calligraphy expert, a writer and a teacher of tai chi, a gentle form of martial arts popular in China.

Mr. Guan said that in the past 30 years, friends have tried to introduce other women to him. He married in his 20s, and has two daughters in their 50s, and a son, who is nearly 60.

Mr. Guan’s list of requirements for his future wife: ideally in her 40s — yes, half his age — hygienic, smart, capable and “not unreasonable.” Other pluses: if she could “bring spiritual relief and happiness.”

But Mr. Guan’s expectations were low. “Nowadays, many people are not hygienic, dress poorly and are not imbued with sophistication and good breeding,” he sniffed.

He had scanned the crowd for close to an hour and was not planning on making the first move.

“I have a problem: When you call me, I don’t call back,” said Mr. Guan, who was dressed in a brown trench coat. “I’m pretty unreasonable. You have to chase me.”

A woman wearing pink lipstick and dressed in a yellow coat lingered in front of Mr. Guan, curious at the sight of him being interviewed.

The woman was Han Shuping. She was actually 52. Divorced, she had been coming to Changpuhe for two years. A man flicked her hair before she playfully swatted him away.

“Most of the characters here are pretty bad,” Ms. Han said. “The old men would ask you out for a meal, invite you back to their place and try to get you in bed.”

Originally from central Henan Province, Ms. Han said she was honest with prospective suitors, telling them she is from the countryside and has no pension.

Ms. Han said she wanted to “find someone who I can chat with and then develop feelings for.”

“At this stage, love at first sight is impossible,” she said.

She was pessimistic about her prospects.

“It is very hard to find someone here,” Ms. Han said. “The genuine ones are few and far between.”

Mr. Zhao, the 78-year-old widower, agreed. He bemoaned the directness of some of the women.

“They want a house, car and money,” said Mr. Zhao, who was tall, bespectacled and stylishly dressed in a beige pageboy cap. “They ask you directly to change the names in the property deed. It’s the first thing they say. Isn’t that terrifying?”

But he still longed for a mate to ward off his loneliness. “It gets miserable,” he said.

Mr. Zhao talked about “three treasures in this life” — to have someone know when “you’re cold or warm, in pain or in despair.”

“If you’ve never experienced these three big treasures, how can you understand what is bliss? What is pain?” Mr. Zhao said. “This is what I’m feeling right now. But I never used to feel like that.”