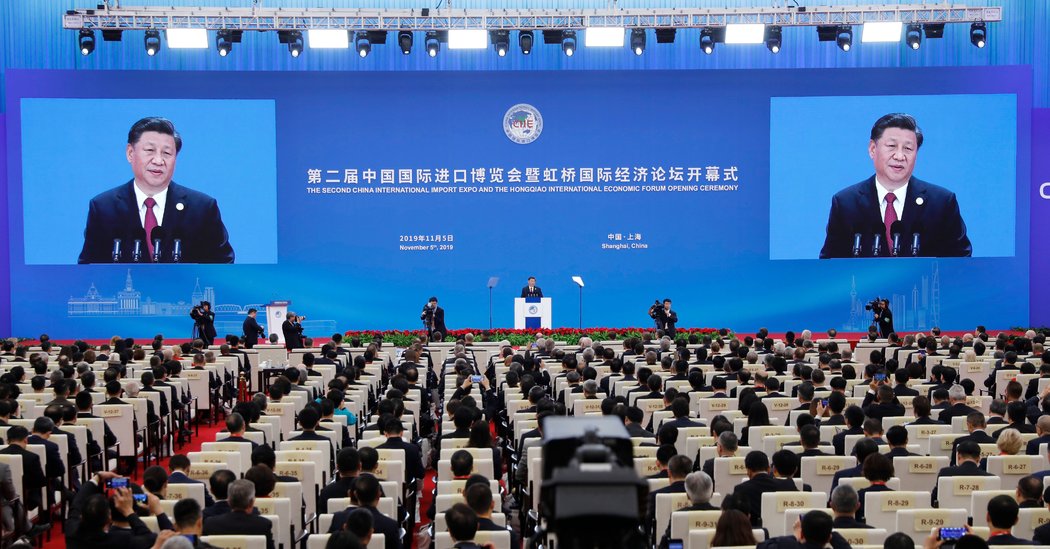 SHANGHAI — Xi Jinping, China’s top leader, broadly endorsed free trade principles and promised to welcome foreign investment in a speech on Tuesday, but a setback with India and a lack of details toward ending the punishing trade war with the United States are testing Beijing’s ability to prove it can make a deal.

Speaking at the opening of the second annual China International Import Expo in Shanghai, Mr. Xi indirectly criticized the Trump administration when he briefly denounced unilateralism.

“Economic globalization is a historical trend,” he said, comparing the momentum to the world’s great rivers. “Although there are sometimes some waves going backward, and even though there are many shoals, the rivers are rushing forward and no one can stop them.”

Most of Mr. Xi’s remarks were devoted to promising that China would maintain its long-running programs of economic reform and opening up. Many Western economists have suggested that during his seven years in power, Mr. Xi has gradually shifted China’s economy back toward a greater reliance on domestic industries, especially state-owned enterprises.

Mr. Xi sought to portray a different image on Tuesday morning, saying that the Communist Party’s top leaders in a meeting last week reaffirmed the principle that China must engage more with the rest of the world.

“China will open its doors only wider to the world,” he said. “China will adhere to the fundamental state policy of opening up.”

The question is whether China will open up fast and far enough for the Trump Administration, which has made Beijing’s management of the world’s second largest economy a major sticking point toward resolving the trade war.

Chinese and American negotiators reached the outlines of a “first phase” trade agreement in Washington on Oct. 11. The framework calls for China to make large-scale purchases of American farm goods and improve protections for intellectual property. In exchange, the Trump administration committed to roll back at least some of its recent increases in tariffs on Chinese goods. The two sides have been working out the details ever since.

Previous plans for Mr. Xi and President Trump to conclude a deal on the sidelines of the Asia-Pacific Economic Cooperation summit meeting at the end of next week in Chile were thrown into disarray when the Chilean government canceled the meeting because of street protests in the capital, Santiago. Mr. Trump has suggested that a signing could be held in Iowa instead.

Mr. Xi did not mention on Tuesday when, where or even whether an agreement might be signed.

The opening of the import expo also came the day after a mixed outcome from seven years of trade talks strongly backed by Beijing to produce a free-trade agreement that would span much of Asia.

Senior officials from 10 Southeast Asian nations plus China, Japan, South Korea, Australia and New Zealand mostly resolved their differences in talks ending in Bangkok on Monday, and hope to sign an agreement next year, the Thai government announced on Monday after hosting the talks.

China had high hopes for the agreement, known as the Regional Comprehensive Economic Partnership. Whatever way the trade war with Washington ends, the prospect of more tensions between the two countries has put pressure on Beijing to open more markets for its companies and factories.

But in a setback for trade negotiators, India announced on Monday that it would not join the new free trade area. India had participated in the negotiations from the beginning.

Since the 15 other countries already have a variety of free trade agreements among each other, the addition of India, with few such agreements, was supposed to be the main benefit of the new pact. But Indian officials have worried that cutting tariffs would mean a flood of Chinese manufactured goods that might put Indian factories out of business.

India had its own free trade demands that China was wary of meeting. India sought a pact that would allow it to export its vast array of low-priced, generic pharmaceuticals to China — a potent source of competition that China’s pharmaceutical industry resisted.

India also asked for broader access to the Chinese market for its formidable business outsourcing industry, including easy visa access for Indian software engineers to come work on projects in China. With China’s tech industry already starting to slow and lay off workers, however, that proposal received a frosty reception from Beijing.

Mr. Xi nonetheless welcomed the outcome of the Bangkok negotiations, telling import expo attendees that he learned of the result with “hope that the agreement will be signed into force as soon as possible.”

China’s trading partners and business groups are pushing Beijing to do more on other fronts to knock down trade barriers.

For example, China is trying to finalize by January the regulations for a new legal code governing foreign investment. The National People’s Congress, China’s rubber-stamp legislature, approved the new legal code last March, but it was little more than a framework, with some critical issues addressed by only a single sentence and the details left to be resolved in the regulations.

Carlo Diego D’Andrea, the chairman of the European Union Chamber of Commerce in Shanghai, said on Monday that draft regulations released last month offered some improvements. But by preserving a separate legal code for foreign investors, he said, the new arrangement ensures that foreign businesspeople would not be treated equally to domestic investors.

At the same time, China continues to impose many rules that deeply frustrate foreign investors, he said.

“You have hundreds of regulations and indirect barriers that make your life miserable doing business here,” Mr. D’Andrea said.

The import expo was designed to promote an image of China as a big customer for foreign exporters and as a proponent of free trade. More than 3,000 companies from around the world sent delegates or opened exhibit booths at Shanghai’s immense convention center, which has five times the exhibition space of the Javits Center in New York City.

For all of China’s difficulties in striking deals, other global leaders have echoed Beijing’s criticism of the Trump administration. Mr. Trump has picked trade fights with allies and rivals alike, upsetting a global trade order that underpins much of the world’s economic activity.

“Should we just resort to unilateralism, tariffs and the law of the jungle?” Mr. Macron asked. “Is that the way forward? I don’t think so.”