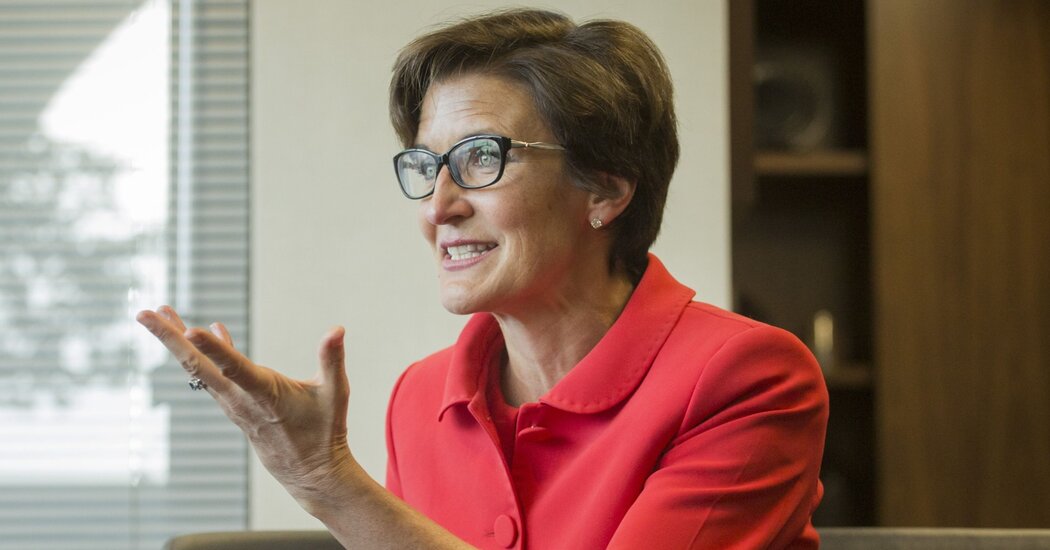 Wall Street’s longest-enduring glass ceiling is about to be broken.

Citigroup, the country’s third-largest bank, said on Thursday that Jane Fraser will become its chief executive in February. She would be the first woman to lead a major financial institution in the United States.

Ms. Fraser, the bank’s president and head of its global consumer banking business, will succeed Michael Corbat, who has served as chief executive since 2012. Ms. Fraser was teed up as the bank’s next leader last year, when she was promoted to her current role.

“It’s frustrating that this moment has been so long in coming,” said Rob Blackwell, the chief content officer for Promontory Interfinancial Network, which provides services for banks. “This is a big moment.”

Ms. Fraser has overseen several of Citi’s businesses, serving as chief executive of its private bank, its Latin American region and its U.S. consumer and commercial bank and mortgage business. She worked at Goldman Sachs and McKinsey & Company before joining Citi in 2004.

“We believe Jane is the right person to build on Mike’s record and take Citi to the next level,” John C. Dugan, Citi’s chairman, said in a statement. “She has deep experience across our lines of business and regions, and we are highly confident in her.”

Ms. Fraser, 53, will join a very small group of female leaders at major corporations. There are only 31 women among the C.E.O.s of the 500 companies that make up the S&P 500 stock index, according to the advocacy group Catalyst.

She will have no female counterparts among the 10 largest U.S. banks. At a hearing of the House Financial Services Committee in April 2019, one lawmaker asked Mr. Corbat and six of his peers — from JPMorgan Chase, Bank of America, Goldman Sachs, Morgan Stanley, Bank of New York Mellon and State Street — to raise their hand if they believed a woman or person of color would succeed them. None did.

There are few women in the top jobs at financial firms. Ana Botín is the executive chairman of Spain’s Banco Santander, a role she has held since 2014 after the death of her father, Emilio. Another woman, Beth Mooney, took over the top job at Cleveland-based KeyCorp, one of the 20 largest U.S. banks, nearly 10 years ago, said Mr. Blackwell, the former editor of American Banker, a trade newspaper. But there was little indication that women were making similar advancements at the country’s most powerful financial firms, most of which are based in New York, he said.

Ms. Fraser’s promotion — where she will oversee a bank with $1.96 trillion in assets — immediately drew kudos from other powerful women on Wall Street. Bank of America’s chief operating officer, Cathy Bessant, who was widely seen as a top candidate to take over as chief executive of Wells Fargo when the bank was searching for a new leader last year, praised the announcement in a post on Twitter on Thursday.

“Great news for the company and for women everywhere,” she wrote.

Citi’s decision to elevate Ms. Fraser is likely to draw attention to the succession plans at other Wall Street firms. JPMorgan Chase has already reshuffled its leadership ranks to put two women, Marianne Lake and Jennifer Piepszak, among the potential candidates to succeed its longtime chairman and chief executive, Jamie Dimon.

Ms. Fraser is taking the helm of a bank that has been trying to keep its footing as a global financial institution in the face of the Trump administration’s trade wars and the coronavirus pandemic. While Ms. Fraser has overseen a wide variety of Citi’s operations, she will now take on a broader role as the firm’s public face, with responsibilities ranging from speaking to Wall Street analysts about Citi’s future to testifying before Congress.

“She is an unknown entity to the street,” Wells Fargo analyst Mike Mayo wrote in a note to investors on Thursday. “For that reason, it is unclear whether she has what it takes to lead such a firm, and whether Citi should have looked externally.”

Mr. Mayo added in an interview on Thursday that Ms. Fraser “has a very impressive résumé, and Citigroup recognized that. She has gotten this role because of her merits and not merely because she is a woman.”

Mr. Corbat, 60, will leave Citi after an eight-year tenure that began with the sudden resignation of his predecessor, Vikram S. Pandit, amid a revolt by its board. Under his leadership, the bank sought to rebuild after the 2008 global financial crisis. In its statement, Citi noted that its net income during Mr. Corbat’s tenure grew to nearly $20 billion last year, from $7 billion in 2012.