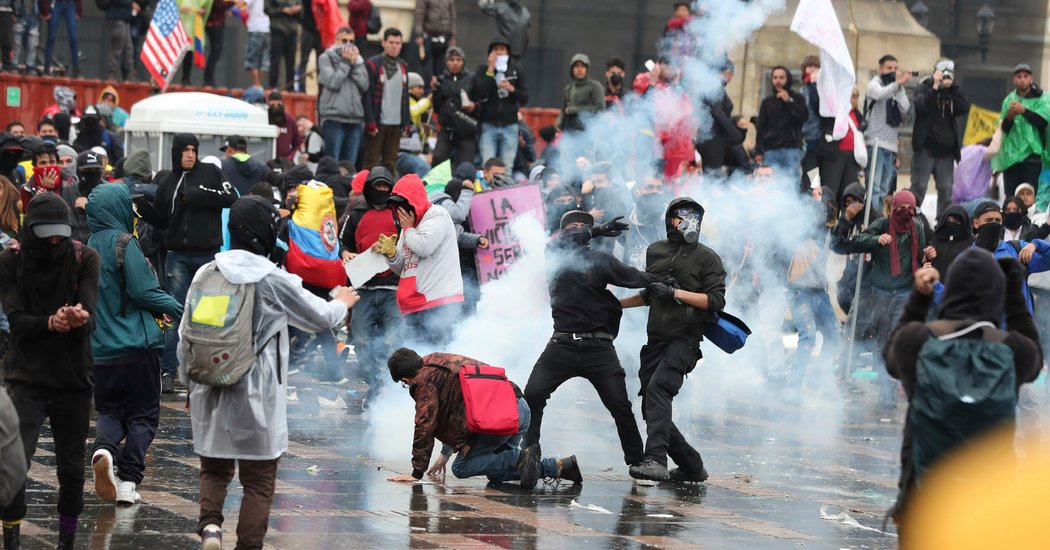 BOGOTA, Colombia — Colombians angry with President Iván Duque and hoping to channel Latin America’s wave of discontent took the streets by the tens of thousands on Thursday in one of the biggest protests in the nation’s recent history.

Students, teachers and labor union organizers marched across the country protesting everything from economic inequality to violence against civic leaders, testing an unpopular government as unrest grips the region.

“It’s about time,” said Julio Contreras, 23, a medical student. “No more of the same — lies, corruption. We’re here to put up a fight.”

The protests were largely peaceful but by turned violent at night as demonstrators hurled rocks at riot police, who responded with tear gas. At one point, protesters tried to enter the nation’s congress and tore down a part of black cloth protecting a historic building in Bolivar Square.

Analysts were skeptical the march would generate the prolonged unrest seen in Bolivia, Chile and Ecuador, noting a lack of unifying factors in a divided country that is one of the region’s stronger economic performers.

“We’re not in a pre-insurrectional climate,” said Yann Basset, a professor at Bogota’s Rosario University. “I’m not sure there’s a general rejection of the political system.”

“If the government doesn’t make changes, next year will be very difficult,” said Ariel Ávila, deputy director of the Peace and Reconciliation Foundation.

Mr. Duque, who has a lackluster 26 percent approval rating, went on a recent charm offensive, seeking to counter erroneous social media claims that he has proposed raising the retirement age and reducing wages for young workers.

“I’m not here to talk about a garden of roses,” he said in a radio interview before the protest. “I’m talking about a country that is recovering, an economy that is improving and is today one of the best in Latin America.”

Still, many Colombians say they have plenty of reasons to be angry.

Despite the previous administration’s 2016 peace accord with leftist rebels, much of Colombia is still engulfed in violence as illegal armed groups compete for territory where the state has historically been absent. Dozens of indigenous and social leaders have been killed in crimes that remain largely unsolved.