For some governments, a happy new milestone: a day with no new local cases.

With social distancing and virus testing policies in place for months in several countries, a few governments are now reporting remarkable milestones: Recording zero new domestically transmitted coronavirus cases, or no new cases at all.

South Korea on Thursday reported that for the first time since the virus’s Feb. 29 peak, it had no new domestic cases, and just four cases among people who came in from outside the country. The development marked a stark turnaround for a nation that was battered early on by the virus — with 909 cases on Feb. 29 alone — and quickly conducted widespread testing and contract tracing of new infections to halt the virus’s spread.

That progress has been mirrored in Hong Kong, which on Wednesday reported there had been no new cases in the semiautonomous territory for four straight days. The city has had more than 1,000 cases overall, and it saw a resurgence in infections in late March that prompted strict lockdowns on travel, including quarantining of foreign arrivals, social distancing measures and the widespread adoption of work-from-home policies.

Hong Kong residents overwhelmingly wear masks when going outside, even with the recent plunge in new cases.

Other countries are flirting with similar successes. Australia reported just nine new cases on Wednesday, and New Zealand had two days over the last week with just one new confirmed coronavirus infection. 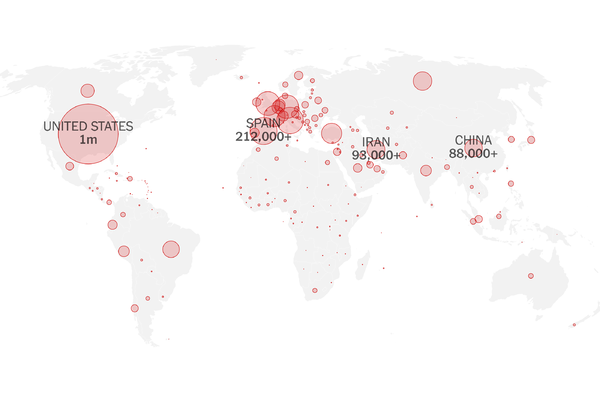 In its war of words with the U.S., China finds a target: Mike Pompeo.

Even as its relations with the United States spiral evermore downward, China has refrained from directly attacking President Trump. Instead, it has found an outlet for its fury toward the United States in Mr. Trump’s hawkish secretary of state, Mike Pompeo.

Mr. Pompeo has faced a relentless — and seemingly coordinated — assault from Chinese officials and state media over the last week. He has been accused of bullying, lying and denigrating the ruling Communist Party for its handling of the coronavirus pandemic even as the United States struggles to cope.

On Monday, the state television network, CCTV, declared Mr. Pompeo the “common enemy of mankind.” It then drove home the point over the next two nights. Never before had a secretary of state “lowered the prestige of the United States so dramatically,” one commentator said.

Another state news outlet, Xinhua, the official wire service, tweeted a clever bit of propaganda, a cartoon in which the United States failed to heed China’s warnings.

The attacks appeared to signal an end to the rhetorical truce that Mr. Trump and China’s leader, Xi Jinping, reached at the beginning of April. That truce was tenuous at best, but it has unraveled as the coronavirus has ravaged the United States.

In a recent interview with Reuters, Mr. Trump suggested that China was trying to influence the outcome of the upcoming presidential election.

“China will do anything they can to have me lose this race,” he said.

Mr. Pompeo, who once called the Communist Party of China “a substantial threat to our health and way of life,” has delivered his own flurry of critiques over China’s handling of the pandemic.

In a series of interviews and briefings in recent weeks, he has accused the Communist government of allowing the coronavirus to spread and suppressing evidence of how it emerged. He also raised the possibility that the virus leaked from a lab in Wuhan, without detailing any evidence to support his claim.

“What the Chinese Communist Party did here, in not preventing the spread of this around the world, they are responsible for,” he said in an interview on “Fox and Friends” on Wednesday. “America needs to hold them accountable.”

The People’s Daily counterattacked on Thursday, warning that “blindly attacking and discrediting other countries will only cause more people to lose their lives.”

The White House and the stock market latch onto hopeful signs, but doubts remain.

With more than a million confirmed coronavirus cases in the United States and more than 26 million people out of work, the hunger for good news was so strong on Wednesday that reports that a possible treatment for the virus showed early signs of promise helped rally the stock market.

The early results of the federal trial showed that treatment with remdesivir, an experimental antiviral drug, can speed recovery in infected patients.

“It is a very important proof of concept, because what it has proved is that a drug can block this virus,” said Dr. Anthony S. Fauci, the director of the National Institute of Allergy and Infectious Diseases. Still, he cautioned that the results needed to be peer-reviewed.

The findings helped the S&P 500 gain nearly 3 percent on a day when the Commerce Department reported the worst quarterly contraction in the nation’s gross domestic product since 2008, during the Great Recession. The economy shrank 4.8 percent, and the worst is yet to come.

As the nation surpassed 60,000 deaths from the virus and states began to reopen — Florida announced plans for Monday — President Trump and his advisers embraced optimism. The president pushed for a crash program to develop a vaccine, an undertaking viewed with some skepticism even inside the administration. And the White House offered a revisionist history of the pandemic in which the administration’s actions were not belated and inadequate, but bold and effective.

“The federal government rose to the challenge, and this is a great success story,” Jared Kushner, the president’s son-in-law and senior adviser, said on “Fox & Friends.” “And I think that that’s really, you know, what needs to be told.”

A Covid-19 cluster is reported in Yemen, adding to its woes.

In Yemen, already mired in a devastating civil war, widespread hunger and a cholera outbreak, another threat was reported on Wednesday: the first confirmed expansion of the coronavirus in the country.

The authorities in the port city of Aden announced a cluster of five cases and immediately imposed a two-week lockdown that included the closing of shops and mosques.

Since then, the fighting has gotten worse.

A coronavirus outbreak, combined with a surge in fighting, could push the country to “the brink of a catastrophe,” warned Tamuna Sabadze, the Yemen director at the International Rescue Committee.

The virus has already worsened conflicts around the world. In Libya, for example, it has left some people wondering which fate might be worse: death by missile or death by pneumonia.

After the coronavirus death toll surged in Iran and the virus dealt a new blow to the already struggling economy, many Afghans who had fled there to escape conflicts at home reversed course in recent weeks.

In the United States, concerns over the pandemic have forced the Defense Department to juggle two competing instincts: protecting troops from the virus and continuing its decades-old mission of patrolling the globe.

And in Yemen, the woes are only multiplying as the threat of a pandemic looms. A recent spate of torrential rains has exacerbated the cholera outbreak there, and flash floods in the south of the country last week washed away the homes of hundreds of people.

An urban exodus is convulsing Peru as city dwellers pour out to the countryside to live with their families.

In Lima, the capital, the bus terminals are so crowded with those waiting to escape that families are sleeping outside, side by side. Highways are lined with people on foot, laden with suitcases and children.

“We brought just a small suitcase,” said Wilson Granda, 28, an unemployed waiter, speaking from a bus terminal where his young family had been waiting for four days for a ride to his parents’ farm.

In all, at least 167,000 Peruvians in urban areas have registered with local governments, asking for help leaving cities and returning to their families.

Peru is emerging as one of the Latin American countries hardest hit by the pandemic, at least according to official counts. The country of about 30 million people is second only to Brazil, with about 30,000 confirmed cases, most of them in Lima.

Now, Peru is experiencing a reverse exodus of sorts.

For decades, rural families traveled from the countryside to Lima in search of work. That migration changed the face of the country, turning it into one of the more urbanized nations in the world.

The flow of people is part of larger virus-related migration patterns around the world that are raising alarm about the spread of contagion into rural areas, and worrying small-town officials who are ill-prepared to support large groups of new people.

The hunt for ventilators to keep alive people severely stricken by Covid-19 has taken a violent turn in Russia.

Russian law enforcement officers exchanged gunfire with a gang suspected of trafficking in the devices during a raid near Moscow, a Russian news outlet with close ties to the security services reported on Wednesday.

Life, an online journal, said that eight people had been detained, accused of trying to sell 100 ventilators for 70 million rubles, around $96,000. The official state news agency, Tass, also reported the raid but said the devices were all fake.

President Vladimir V. Putin and other officials have repeatedly warned against fraudsters trying to exploit the pandemic for profit.

The Moscow Times reported last month that wealthy Russians, wary of the health care offered by state hospitals, were buying ventilators for their own homes just in case family members fell ill with Covid-19.

Mr. Putin, seeking to calm fears of shortages, said in a televised address on Tuesday that Russia had ramped up domestic production of artificial breathing devices and now produces more than 800 a month. That is up from just 60 to 70 at the start of the year.