SURAT, India — The hit that India’s dreams have taken from the coronavirus pandemic can be found in the hushed streets of Surat’s industrial zone.

You can see it in textile mills that took generations to build but are now sputtering, eking out about a tenth of the fabric they used to make.

You can see it in the lean faces of the families who used to sew the finishing touches on saris but, with so little business, are now cutting back on vegetables and milk.

You can see it in the empty barbershops and mobile phone stores, which shoppers have deserted as their meager savings dwindle to nothing.

Ashish Gujarati, the head of a textile association in this commercial hub on India’s west coast, stood in front of a deserted factory with a shellshocked look on his face and pointed up the road.

“You see that smokestack?” he asked. “There used to be smoke coming out of it.” 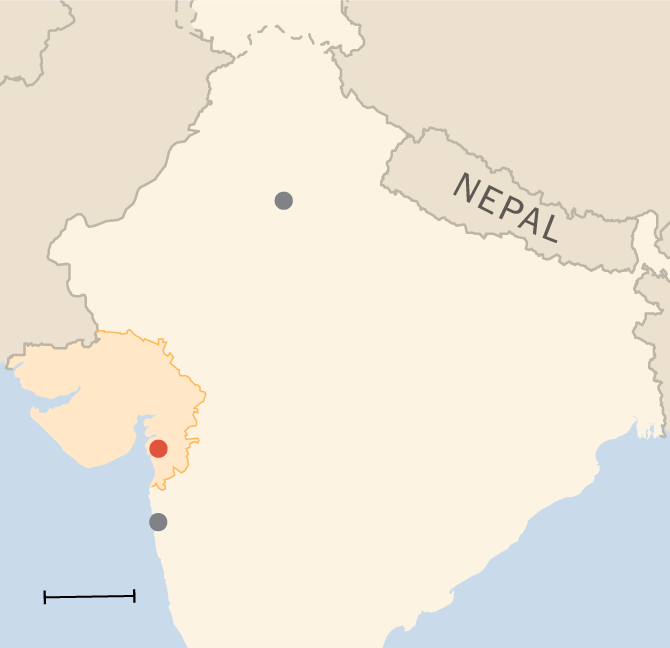 Not so long ago, India’s future looked entirely different. It boasted a sizzling economy that was lifting millions out of poverty, building modern megacities and amassing serious geopolitical firepower. It aimed to give its people a middle-class lifestyle, update its woefully vintage military and become a regional political and economic superpower that could someday rival China, Asia’s biggest success story.

But the economic devastation in Surat and across the country is imperiling many of India’s aspirations. The Indian economy has shrunk faster than any other major nation’s. As many as 200 million people could slip back into poverty, according to some estimates. Many of its normally vibrant streets are empty, with people too frightened of the outbreak to venture far.

Much of this damage was caused by the coronavirus lockdown imposed by India’s prime minister, Narendra Modi, which experts now say was at turns both too tight and too porous, both hurting the economy and spreading the virus. India now has the fastest growing coronavirus crisis, with more than 80,000 new infections reported each day.

A sense of malaise is creeping over the nation. Its economic growth was slowing even before the pandemic. Social divisions are widening. Anti-Muslim feelings are on the rise, partly because of a malicious social media campaign that falsely blamed Muslims for spreading the virus. China is increasingly muscling into Indian territory.

Scholars use many of the same words when contemplating India today: Lost. Listless. Wounded. Rudderless. Unjust.

In a recent episode of his weekly radio show, Mr. Modi acknowledged that India was “fighting on many fronts.” He urged Indians to maintain social distancing, wear masks and keep “hale and hearty.”

India still has strengths. It has a huge, young work force and oodles of tech geniuses. It represents a possible alternative to China at a time when the United States and much of the rest of the world is realigning itself away from Beijing.

But its stature in the world is slipping. Last quarter the Indian economy shrank by 24 percent, while China’s is growing again. Economists say India risks losing its place as the world’s fifth largest economy, behind the United States, China, Japan and Germany.

“This is probably the worst situation India has been in since independence,” said Jayati Ghosh, a development economist at Jawaharlal Nehru University in New Delhi. “People have no money. Investors aren’t going to invest if there is no market. And the costs have gone up for most production.”

Many neighborhoods in the capital of New Delhi where low-paid workers used to live are deserted, shell-like, a hot wind blowing through empty, tin-walled shacks. A few years ago, when the economy was expanding at a 9 percent clip, it was difficult to find a place here to rent.

When Mr. Modi was swept to power in 2014 on a tide of Hindu nationalism, many Indians felt their nation had finally found the forceful leader to match their aspirations.

But Mr. Modi has concentrated his energies on divisive ideological projects, like a new citizenship law that blatantly discriminates against Muslims or tightening the government’s grip over the mostly Muslim region of Kashmir.

Quarter by quarter, India’s economic growth rate has been dropping, from 8 percent in 2016 to 4 percent right before the pandemic. Four percent would be respectable for a developed country like the United States. But in India, that level is no match for the millions of young people streaming into the work force each year, hungry for their first job.

Many of the complaints that investors make about India — the cumbersome land policies, the restrictive labor laws, the red tape — predate Mr. Modi. But his confidence and absolutism, the same qualities that appealed to many voters, may have added to the problems.

Four years ago he suddenly wiped out nearly 90 percent of India’s paper currency to tamp down corruption and encourage digital payments. While economists cheered both goals, they say the way Mr. Modi sprang this move on India did long-lasting damage to the economy.

That impulsiveness emerged again when the coronavirus struck. On March 24, at 8 p.m., after ordering all Indians to stay indoors, Mr. Modi shut down the economy — offices, factories, roads, trains, borders between states, just about everything — with four hours’ notice.

Tens of millions of Indians lost their jobs instantly. Many worked in factories or on construction sites or in urban homes, but they were migrants from rural India.

Fearing they would starve to death in city slums, millions poured out of the urban centers and walked, rode bicycles or hitched desperate rides back to their villages, an epic reverse migration from city to countryside that India had never seen. That dragged coronavirus into every corner of this country of 1.3 billion people.

Now, looking back on it, many economists trace the root of India’s interlocking crises — spiraling infections and a devastated economy — to this moment.

“India’s embarrassing slowdown in the second quarter of 2020 is almost entirely because of the nature of the lockdown,” said Kaushik Basu, a former chief economist at the World Bank and now a professor at Cornell. “This may have been worth it if it arrested the pandemic. It did not.”

He called the approach “lockdown-and-scatter” and said Mr. Modi’s policies had been a “failure.”

Some workers have trickled back to the cities. But the construction and manufacturing industries have contracted sharply because many migrant laborers remain so traumatized, they don’t want to ever go back.

“We went hungry for days,” said Mohammad Chand, who once worked in a garment factory near Delhi but fled to his ancestral village, hundreds of miles away. “I had to shunt from place to place after being thrown out by the landlord. Even relatives started showing us the door.”

“I don’t want to be in that situation again,” he said.

In Surat’s textile market, Jagdish Goyal sat scowling in his deserted shop with piles of women’s suits in teals and oranges, priced for the working poor, now stacked to the ceiling.

“Nobody’s buying,” he said. “Why? Because there are no social functions. No weddings to dress up for. No places to go. No big birthday parties. People are scared to go out.”

Fear of catching the virus seems to be a decisive factor in India’s economic crisis, extending beyond the lockdown. Going out to shop means risking illness in a time when sick people are sometimes turned away from hospitals.

According to a recent Google Mobility Report, which tracks cellphone data, trips to retail and recreation areas have dropped by 39 percent compared with before the pandemic. In Brazil and the United States, the only countries with more coronavirus infections, the drops were less than half as severe.

Mr. Modi’s government has provided some emergency relief, around $260 billion, but economists said too little flowed to the poor. Tax revenues have plummeted, some states are unable to pay health care workers and government debt is approaching its highest level in 40 years.

Part of this can be explained by the competition’s collapse. The biggest opposition party, the Indian National Congress, has been hit by defections, back-stabbing and a never-ending existential crisis on who should lead it. And Mr. Modi’s embrace of Hindu nationalism plays well within the Hindu majority, about four-fifths of the population.

“His protection of Hindu values is a big reason why I support him,” said Mr. Goyal, the seller of ladies’ suits. “If our self-respect isn’t alive, what good is the economy?”

A few parts of the economy are doing OK. Agriculture has been lifted by strong monsoon rains. In some cities, like New Delhi, many businesses are open again, though they might have new signs on the doors that say: “No more than 3 People Inside” or “Flat 40 Percent Off!”

But the virus and the economy are intertwined, and India’s virus graph is a steady staircase, going up. India is also No. 3 in virus deaths, though its per capita death rate is much lower.

Anxiety hangs in the humid air of Surat’s textile zone.

“No one comes for a shave anymore,” lamented Akshay Sen, a young barber with a few coins in his pocket.

His words echoed off the shuttered shops. Behind him stood a bunch of men milling around a tea stand but not buying any tea.

Behind all that, like a warning sign on the horizon, stood yet another tall brick smokestack, smokeless.