Cities are remarkably resilient. They have risen from the ashes after being carpet-bombed and hit with nuclear weapons. “If you think about pandemics in the past,” noted the Princeton economist Esteban Rossi-Hansberg, “they didn’t destroy cities.”

That’s because cities are valuable. The New York metropolitan area generates more economic output than Australia or Spain. The San Francisco region produced nearly one of five patents registered in the United States in 2015. Altogether, 10 cities, home to under a quarter of the country’s population, account for almost half of its patents and a third of its economic production.

So even as the Covid-19 death toll rises in the nation’s most dense urban cores, economists still mostly expect them to bounce back, once there is a vaccine, a treatment or a successful strategy to contain the virus’s spread. “I end up being optimistic,” said the Harvard economist Edward Glaeser. “Because the downside of a nonurban world is so terrible that we are going to spend whatever it takes to prevent that.”

And yet there is a lingering sense that this time might be different.

The pandemic threatens the assets that make America’s most successful cities so dynamic — not only their bars, museums and theaters, but also their dense networks of innovative businesses and highly skilled workers, jumping among employers, bumping into one another, sharing ideas, powering innovation and lifting productivity.

Compelled by the imperative of social distancing, the cutting-edge businesses that flocked to cities to exploit their bundles of talent have been experimenting with technologies that allow them to replicate their social interactions even if everybody is working from home.

As Mr. Rossi-Hansberg put it, “There’s a little bit of a realization that we can still do things,” even when we all stay home.

Covid-19 is not the deadliest disease to have ravaged cities through the ages. But it is showing us that they might not be as essential as they once were. “Cities are more in danger than in the 19th century even though this plague is less severe,” Mr. Glaeser said, “because we are rich enough to imagine a deurbanized world.”

Mark Zuckerberg, Facebook’s chief executive, has said he wants to reconfigure the company so half of its employees could work from home within the next decade. Twitter has said it will allow employees to work from home indefinitely. Jonathan Dingel and Brent Neiman of the University of Chicago estimate that almost 40 percent of the nation’s jobs can be done from home. If this model catches on, it could reconfigure the geography of America’s tech industries.

A survey by the market research firm Reach Advisors found that companies facing high real estate and labor costs were the most interested in pursuing remote work into the future. “The biggest shift away from density will likely be in markets such as the Bay Area and New York City,” said the company’s president, James Chung. By shifting to remote work, “they can dramatically widen their labor pool and evade the labor-wage trap that they are in.” 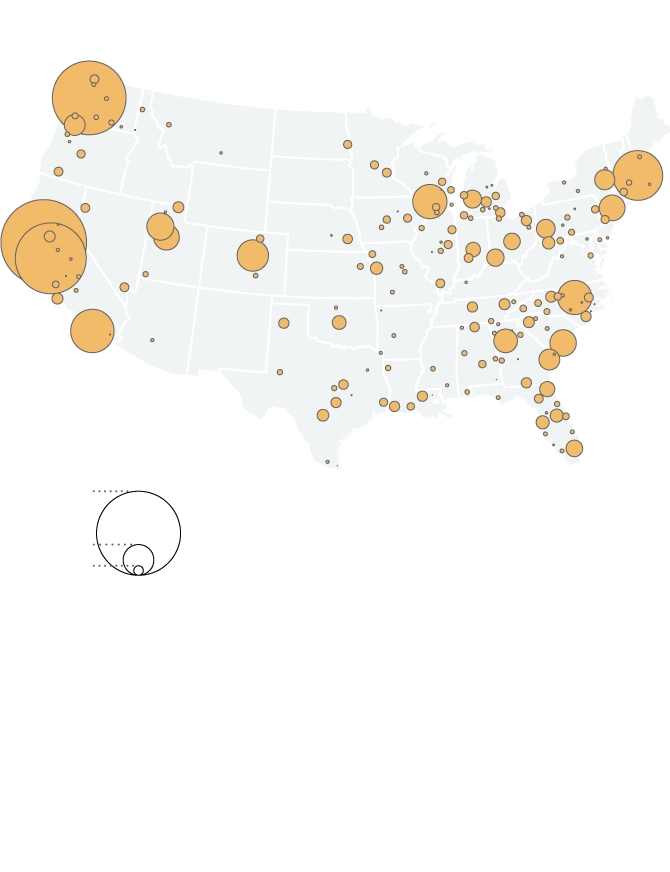 Metro areas that have gained 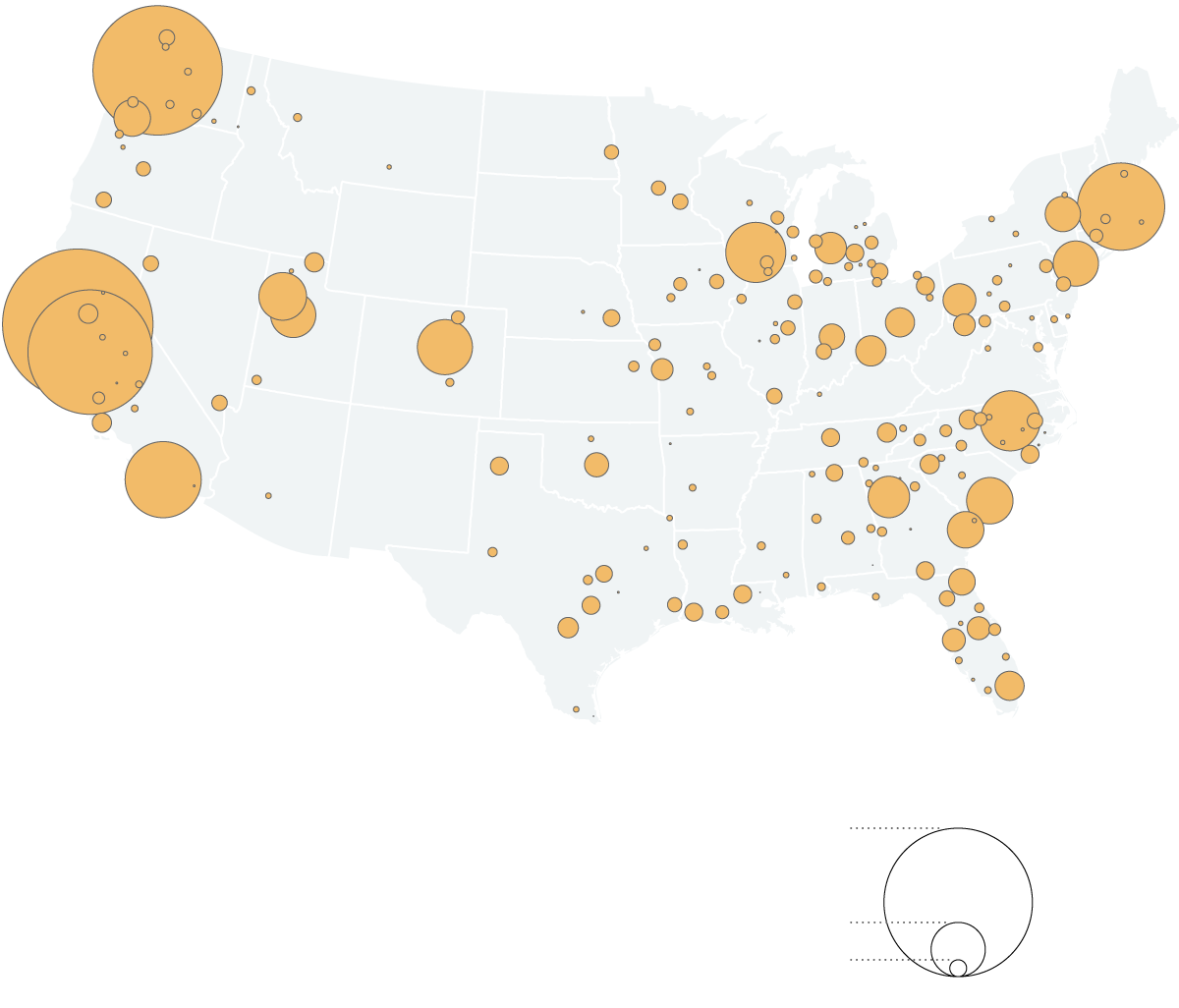 Metro areas that have gained

They have benefited from the rise of economic complexity and the explosive growth of technologies that reward the most highly educated workers. Complex industries like information technology, biotechnology and finance concentrate in large cities where they can find the most skilled employees.

These cutting-edge businesses don’t mind paying top dollar for the talent, not least because — research has found — highly skilled workers tend to be more productive and innovative when they are surrounded by others like them.

Despite the stratospheric rents, which have been pushing low-wage workers out, highly educated workers have continued to flock to the nation’s megalopolises in search of the high pay and urban amenities that have emerged to serve this affluent clientele. 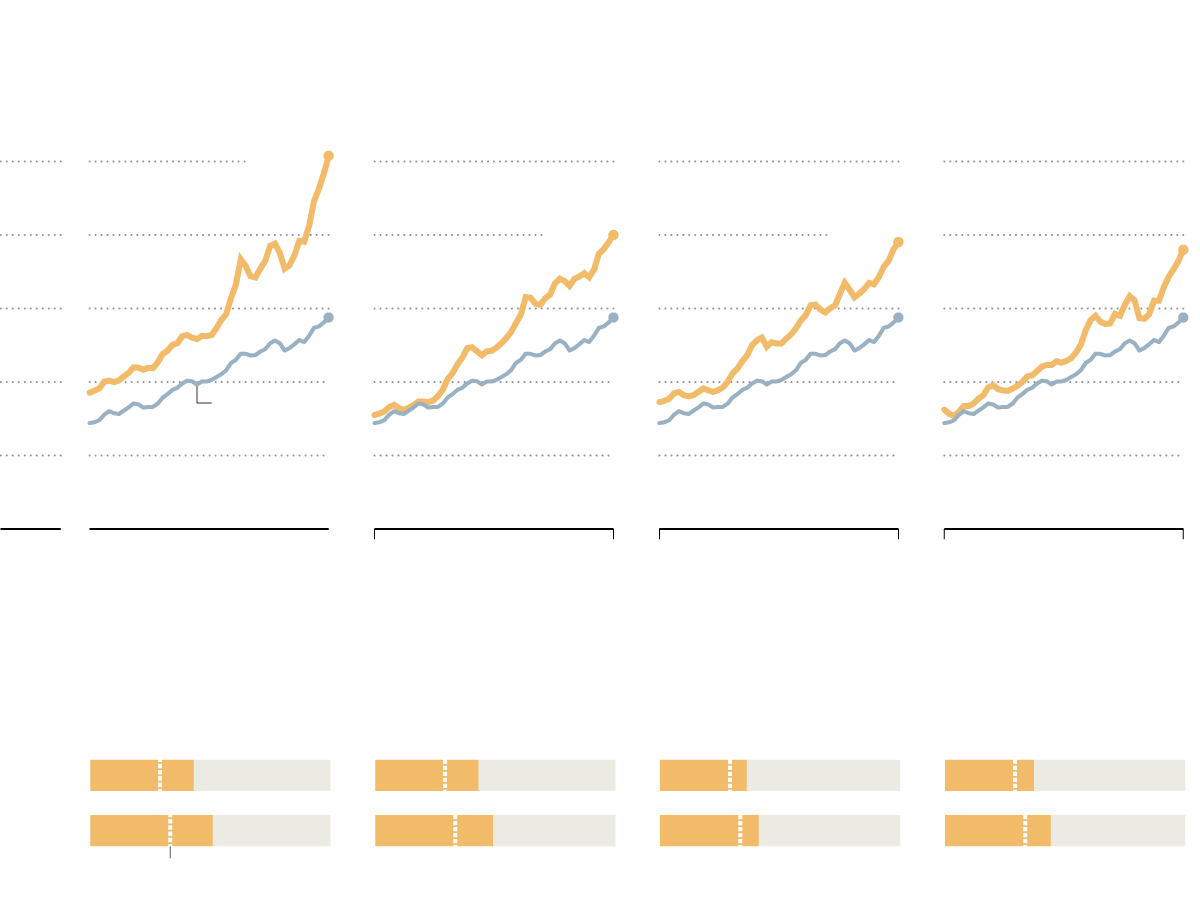 In thousands of 2019 dollars

Share of population holding a bachelor’s degree or higher

In thousands of 2019 dollars

Share of population holding a bachelor’s degree or higher

But if big-city businesses find that work from home doesn’t hit their productivity too hard, they might reassess the need to pay top dollar to keep employees in, say, Seattle or the Bay Area. Workers cooped up in a two-bedroom in Long Island City, Queens, might prefer moving to the suburbs or even farther away, and save on rent.

Mr. Glaeser and colleagues from Harvard and the University of Illinois studied surveys tracking companies that allowed their employees to work from home at least part of the time since March. Over one-half of large businesses and over one-third of small ones didn’t detect any productivity loss. More than one in four reported a productivity increase.

Moreover, the researchers found that about four in 10 companies expect that 40 percent of their employees who switched to remote work during the pandemic will keep doing so after the crisis, at least in part. That’s 16 percent of the work force. Most of these workers are among the more highly educated and well paid.

Will they stay in the city if they don’t need to go to the office more than a couple of times a week? Erik Hurst, an economist at the University of Chicago, argues that people will always seek the kind of social contact that cities provide. But what if their employers stop paying enough to support the urban lifestyle? Young families might flee to the suburbs sooner, especially if a more austere new urban economy can no longer support the ecosystem of restaurants and theaters that made city life attractive.

The overall economy might be less productive, having lost some of the benefits of social connection. But as long as the hit is not too severe, employers might be better off, paying lower wages and saving on office space. And workers might prefer a state of the world with somewhat lower wages and no commute.

Municipal governments in superstar cities might have a tough time doing their job as their tax base shrinks. The survival of brick-and-mortar retailers will be threatened as social distancing accelerates the shift to online shopping.

Smaller cities might benefit. If they don’t have to go into the office more than a couple of times a year, highly skilled workers in places like Seattle or Los Angeles might prefer Boulder or Vail.

“Everybody agrees on what are the key forces,” said Gilles Duranton, an economist at the Wharton School of the University of Pennsylvania. “The question is which will play out, and where are the tipping points?”

One of the big remaining questions is whether remote work will prove sustainable. The productivity increases captured in the surveys examined by Mr. Glaeser’s team might prove fleeting.

“In the more likely state of the world, we realize that we can carry on a project remotely for one or two days but ultimately we do need face-to-face interaction,” said Enrico Moretti, an expert in urban economics at the University of California, Berkeley. Remote education has proved inferior. In the long run, people may still need to live close to where they work.

And yet, technology continues to improve. “There are more incentives to invest in more technologies to stay at home,” Mr. Rossi-Hansberg said.

Mr. Rossi-Hansberg suggests that a reconfigured urban America could look a bit more like the 1980s, before technology set in motion the forces that produced the present-day superstars, leaving other places behind. “This would flatten the distribution of cities and reduce the occupational polarization of cities,” he said.

It would be a different world. But it might not be too terrible for urban living.

Consider life in a reconfigured New York City. Rents are lower, after the departure of many of its bankers and lawyers. There are fewer fancy restaurants, but probably still many cheaper ones. People with lower incomes, including the young, can again afford to live in town. City services may be reduced, but if a fifth or more of workers aren’t going to the office on any given day it will be easier to get around.

Mr. Duranton argues that the cities that will be devastated by Covid-19 are the ones that have been falling for a long time: the Rochesters and the Binghamtons, which lost their sustenance once the manufacturing industries that supported them through much of the 20th century folded or moved away.

But for a city like New York, he said, Covid-19 offers an opportunity for redemption. “New York was running into a dead end, turning into a paradise for the rich,” he said. “Culturally dead.” Moving back to a cheaper, messier, more diverse equilibrium may carry a silver lining.