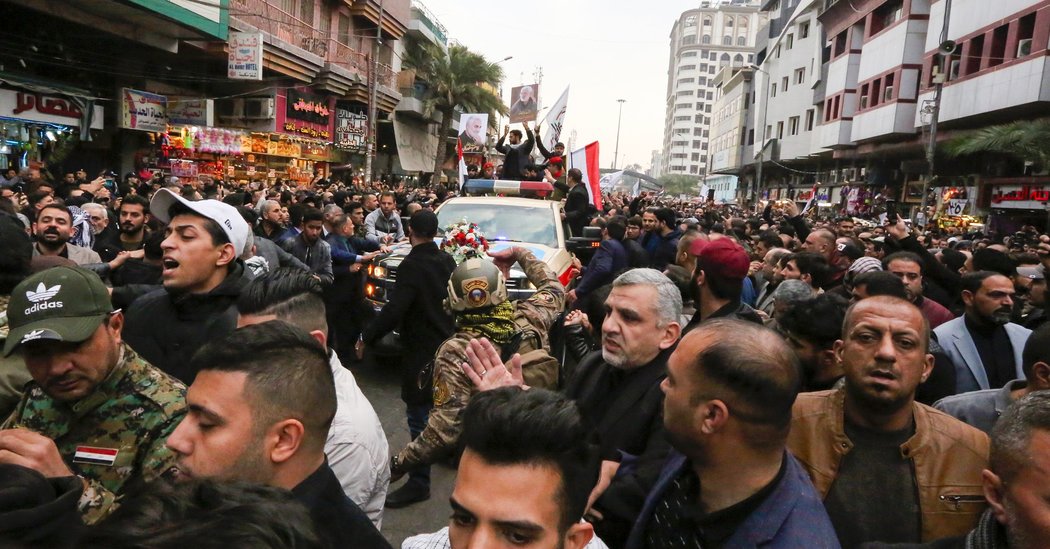 BAGHDAD — As Iraq held joint funeral services on Saturday for two revered military leaders killed in an American drone strike near the Baghdad airport this past week, tens of thousands of pro-Iranian fighters marched through Baghdad, waving flags and chanting that “revenge is coming” to the United States.

Iran’s supreme leader, Ayatollah Ali Khamenei, vowed “forceful revenge” as the country mourned the death of General Suleimani and calls have accelerated to eject the United States from Iraq. Across the region, fears are rising that the shadow war that had been building between the United States and Iran could suddenly escalate into a wide-ranging conflict.

General Suleimani, 62, spent much of his life building Iran’s network of ties with militant groups across the Middle East, including in Gaza, Lebanon, Syria, Iraq and Yemen.

The extent of that network added to the uncertainty about how Iran might respond to his killing. If it chose to, Tehran could do so by relying on allied forces in any of those places to target United States troops, or American allies such as Israel, Saudi Arabia or other countries in the Persian Gulf.

But experts said it remained unclear how, when and even whether Iran would make good on its threats of vengeance. They noted that the country had to balance its need to show resolve against a staunch enemy and its reluctance to thrust itself into a full-scale war with the United States, a much stronger power. That led some scholars to suggest that Iran’s response could end up being underwhelming.

“Technically, Iran could attack U.S. bases in Syria or in Iraq, but that would drive an even greater retaliation from the United States that I don’t think even Iran would wish to happen,” said Lina Khatib, the head of the Middle East and North Africa Program at Chatham House, a London-based research institute.

“I may be in the minority here, but I think with this new development, despite Iran’s outlandish statements, ultimately Iran has been pushed into a corner,” she added.

Iran can count on a range of assets in the region, including the Palestinian groups Hamas and Islamic Jihad in Gaza, Hezbollah in Lebanon, the Houthi rebels in Yemen and a range of fighting groups in Iraq and Syria that operate close to small contingents of American troops.

In recent months, Iran and its allies have struck oil facilities in Saudi Arabia and targeted tanker traffic in some of the world’s busiest shipping lanes in the Persian Gulf. A senior commander in Iran’s Islamic Revolutionary Guard Corps raised the prospect of possible attacks on ships in the Gulf, saying that Iran would retaliate against Americans wherever they were within reach of the Islamic Republic.

Gen. Gholamali Abuhamzeh, the commander of the Guards in the southern province of Kerman, said on Friday in comments reported by the Tasnim news agency on Saturday: “The Strait of Hormuz is a vital point for the West, and a large number of American destroyers and warships cross there.”

The funeral services were held against a backdrop of extreme regional tension as Iran and the United States signaled they could be on the brink of a potentially catastrophic war. Since the killing of General Suleimani and Mr. al-Muhandis, neither side has made another move — although both have made threats.

At the joint funerals, as close to a state ceremony in Iraq as any since the fall of Saddam Hussein, a key pillar of Iran’s regional reach was on display in Baghdad. Many of the mourners were members of Iraq’s Popular Mobilization Forces, militias that came together to fight the Islamic State and are now overseen by the Iraqi military.

The most powerful of those militias are affiliated with Iran; their fighters wore somber faces and black clothes as they marched carrying the flags of their groups. They chanted: “The blood of Abu Mahdi al-Muhandis will not be spilled in vain. Revenge is coming.”

The loss of Mr. al-Muhandis was a profound one for the Iraqi fighters, who saw him not just as a militia leader close to Iran but also as someone who had helped rally the armed groups when they first formed in 2014 to fight the Islamic State as it threatened to sweep toward Baghdad, the Iraqi capital.

The militias have since been brought under the umbrella of the Iraqi military, and Mr. al-Muhandis was their deputy head.

Many declared: “Our men do not fear America; each man dies on his day. Your voice, Abu Mahdi, remains the loudest one.”

While the killing of General Suleimani was a blow to factions aligned with Iran, his death was not mourned in other parts of the Middle East. Many others in the Arab world hated him for marshaling militias to help President Bashar al-Assad in Syria, expand Iran’s leverage in Iraq and boost the ability of Yemen’s Houthi rebels to inflict pain on Saudi Arabia.

“He will kill no more,” read a front-page editorial in Saudi Arabia’s Arab News.

“Let there be no tears shed for Qassim Suleimani; he must have known that he could not get away with these crimes forever, and that he would not die in his bed,” wrote Faisal Abbas, the newspaper’s editor.

General Suleimani’s body will be taken to Najaf, Iraq, a prominent Shiite burial place, then flown to Mashhad, Iran, on Sunday for a funeral service. A large state service is expected in Tehran on Monday, and the general is expected to be buried in his hometown, Kerman, on Tuesday, Iran’s Tasnim news agency reported.

Amid the tensions, the United States has called on its citizens to leave Iraq, shuttered its embassy in Baghdad, sent additional Marines and on Thursday deployed 700 members of the 82nd Airborne Division to the region.

After the strike, President Trump said the attack had been intended “to stop a war” and warned Iran that the United States military had already identified targets for further strikes “if Americans anywhere are threatened.”

But critics have called the strike essentially a political assassination that could further destabilize the region.

On Saturday, China’s foreign minister, Wang Yi, said in a telephone call with his Iranian counterpart, Mohammad Javad Zarif, “The risky military action by the United States violates the fundamental norms of international relations and will worsen regional tensions and turmoil.”

“China urges the United States not to recklessly misuse armed force and to seek solutions to problems through dialogue,” Mr. Wang said, according to a summary of the call issued by the Chinese Foreign Ministry.

Russia’s foreign minister, Sergei Lavrov, also spoke with Mr. Zarif, telling him that “such actions by the United States grossly violate the norms of international law,” according to a Russian Foreign Ministry statement.

In a telephone call with France’s foreign minister, Jean-Yves Le Drian, Mr. Wang also indicated that China hoped to salvage the international agreement curtailing Iran’s nuclear capabilities. He told Mr. Le Drian that the deal was a hard-won “pillar for safeguarding the peace and stability of the Middle East,” the Chinese foreign ministry reported on its website.

Among those attending the funeral on Saturday were Prime Minister Adel Abdul Mahdi of Iraq and a number of senior Shiite leaders, including Ammar al-Hakim; Nuri Kamal al-Maliki, a former prime minister; Falih Al Fayad, the national security adviser; and Hadi al-Amiri, the leader of the Badr Organization, which is both a political party and has one of the largest and oldest militias.

Mr. Abdul Mahdi looked upset as he walked surrounded by security officers in a sea of militia fighters. As Iraq’s leader, he has been caught between Iran, its neighbor, and the United States as the two have ratcheted up their confrontations.

The latest round of violence started with a rocket attack a week ago that killed an American contractor working at an Iraqi military base in the north of the country. That was followed by an American attack on five Popular Mobilization militia bases in western Iraq and Syria that killed more than 24 people and set in motion the events that led to a nearly two-day siege of the United States Embassy in Baghdad.

After the funerals on Saturday, some mourners tried to again enter the Green Zone, which holds the seat of the Iraqi government and the embassies of the United States and other countries. But they were pushed back.

In Iran, the news media flooded its broadcasts and front pages with coverage of General Suleimani’s death, and even news outlets perceived to be more moderate called for revenge.

When President Hassan Rouhani of Iran paid his condolences on Saturday during a visit to General Suleimani’s home, he, too, spoke of revenge — but with an open-ended timeline.

“The Americans did not realize what a great mistake they made,” Mr. Rouhani said. “They will see the effects of this criminal act, not only today, but for years to come.”

The killing of General Suleimani was likely to further fuel anti-Americanism in Iran, as well as empowering the country’s hard-liners over those who called for diplomatic efforts with the United States, said Hamidreza Azizi, assistant professor of international relations at Shahid Beheshti University in Iran.

“This will erode the face of the moderate camp inside Iran, and it will even turn the moderates into hard-liners,” he said.