More than 3 million are heading to shelters during a pandemic.

Cyclone Amphan, now the equivalent of a category 3 hurricane, is predicted to make landfall in India and Bangladesh on Wednesday around 4 p.m. local time with a maximum sustained wind speed of 77 miles per hour.

The intensity of the storm has decreased, officials said, but the cyclone still posed a threat to coastal regions in India and Bangladesh. “We are expecting large-scale damage,” said M. Mohapatra, an official at the India Meteorological Department.

More than three million people in India and Bangladesh are being evacuated to emergency cyclone shelters. Still, some of the shelters are only half full, because of concerns about social distancing during the coronavirus pandemic.

Indian meteorologists said the storm would first hit the ecologically fragile Sundarbans region, between the Indian state of West Bengal and Bangladesh’s Hatiya Islands. The region is home to many rare animals, including Bengal tigers.

The storm is one of the most dangerous super cyclones to hit India in decades, since a cyclone in 1999 killed more than 9,000 people. That storm packed winds of more than 170 miles per hour, devastating many states along India’s coast.

The cyclone was steadily moving up the Bay of Bengal, traveling around 11 miles per hour, bringing heavy rains and big waves.

A million Rohingya refugees are at risk.

For the past few days, Abdur Rahim, a Rohingya refugee, has barely slept.

As Cyclone Amphan heads toward Bangladesh, Mr. Rahim and about one million other Rohingya Muslims living in refugee camps along the coast are preparing for the worst.

Residents are stockpiling food and wrapping personal documents in plastic. Humanitarian groups are placing inflatable boats in the camps to prepare for storm surges of several feet. Government officials are securing steep, muddy hillsides with concrete and bamboo to prevent landslides from the rain.

Mr. Rahim, 39, who lives with his wife and six children in the Kutupalong refugee camp, near the town of Cox’s Bazar, said he and his neighbors were terrified to leave their homes.

“We fear anything can happen,” he said.

Though forecasts show that the Rohingya camps are not in the cyclone’s direct path, aid workers said the storm still posed enormous risks for the Rohingya refugees, who have been sheltering in Bangladesh since 2017 after fleeing violence and persecution in neighboring Myanmar.

With wind gusts expected to reach 100 miles per hour, many Rohingya worry that their makeshift tin and tarpaulin shelters could be blown away. And in recent days, the first cases of Covid-19 have been confirmed in the camps, adding another layer of anxiety and danger to relief efforts.

Snigdha Chakraborty, the Bangladesh director for Catholic Relief Services, said the coast’s limited health facilities and poor infrastructure suggested “a grim picture for the days ahead.”

“There are no evacuation shelters in the camps and we are worried about damage from flooding, wind and risk of Covid-19 as resources are stretched,” she said.

Historic Kolkata hunkers down in the storm’s path.

Kolkata, one of India’s biggest and most historic cities, filled with graceful buildings hundreds of years old, sits directly in Cyclone Amphan’s path. By Wednesday afternoon, the streets were deserted.

“No one is out there,” said Jawhar Sircar, a retired government administrator who lives in the city’s Gariahat neighborhood. He said the skies were gray and that it was drizzling outside, “like London.”

In this case, coronavirus precautions seem to be helping. Many of the 15 or so million people who live in the Kolkata metropolitan area had already been staying at home, obeying India’s lockdown rules.

Still, Kolkata officials were not taking any chances. They cleared out storm drains, shored up slum shanties with bamboo poles and removed objects like potted plants from roofs and balconies so they wouldn’t turn into missiles.

In Kolkata’s fancier neighborhoods, residents were being told to jam cloth into the rails of their sliding doors and windows — to make sure the incoming wind gusts didn’t wrench them open — and to leave their parked cars in gear and with the emergency brake on so they didn’t roll away.

Kolkata served as the capital of British India from 1772 to 1911, until New Delhi was chosen. It is usually spared the brunt of cyclones, as it lies more than 50 miles inland from the Bay of Bengal. “The British wanted safety from the turbulent sea weather,” Mr. Sircar explained.

By Wednesday afternoon, that turbulent weather was headed straight toward the city.

Cyclone Amphan swept over the Bay of Bengal on Monday as the strongest cyclone ever recorded in the region. But by Tuesday a phenomenon called vertical wind shear — the shifting of winds with altitude — had disrupted the storm’s rotational structure, weakening it. 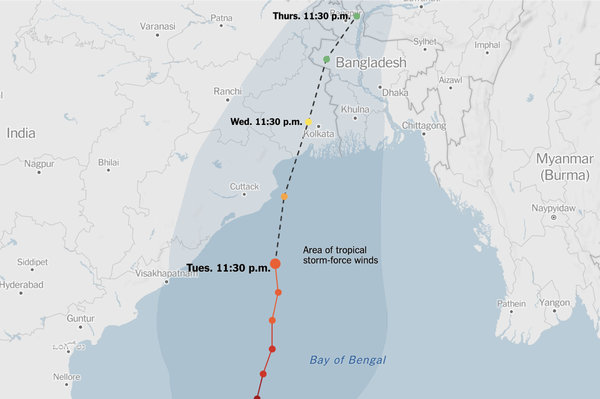 On Tuesday, the cyclone approached the coastal areas near the border of India and Bangladesh as a Category 3 storm.

Amphan initially grew powerful because the waters it passed over were exceedingly warm, as high as 88 degrees in parts of the Indian Ocean. Warmer water provides more of the energy that fuels such rotating storms.

As a result of climate change, ocean temperatures are rising, but other factors, including natural variability, can play a role. While it is not possible to say whether any one specific storm such as Amphan was made more powerful by climate change, scientists have long expected that tropical storms like it would increase in strength as the world warms.

That expectation was based on the laws of physics and computer climate models and not on studies of actual storms. But earlier this week, researchers in the United States with the National Oceanic and Atmospheric Administration, using observational data, reported that the likelihood of these kinds of cyclonic storms developing into the equivalent of Category 3 storms had increased by about 8 percent per decade since the late 1970s.

Hurricane? Typhoon? All cyclones, but the location matters.

What makes a storm a hurricane, a typhoon or a cyclone? It comes down to location. They all refer to tropical cyclones — low-pressure circular storm systems with winds greater than 74 miles per hour that form over warm waters — but different terms are used in different parts of the world.

The word hurricane is used for tropical cyclones that form in the North Atlantic, northeastern Pacific, the Caribbean Sea and the Gulf of Mexico. Typhoons are storms that develop in the northwestern Pacific and usually threaten Asia.

The international date line serves as the Pacific Ocean’s dividing marker, so when a hurricane crosses over it from east to west, it becomes a typhoon instead, and vice versa.

All of these cyclonic storms act to regulate the overall climate, moving heat energy from the tropics toward the poles.