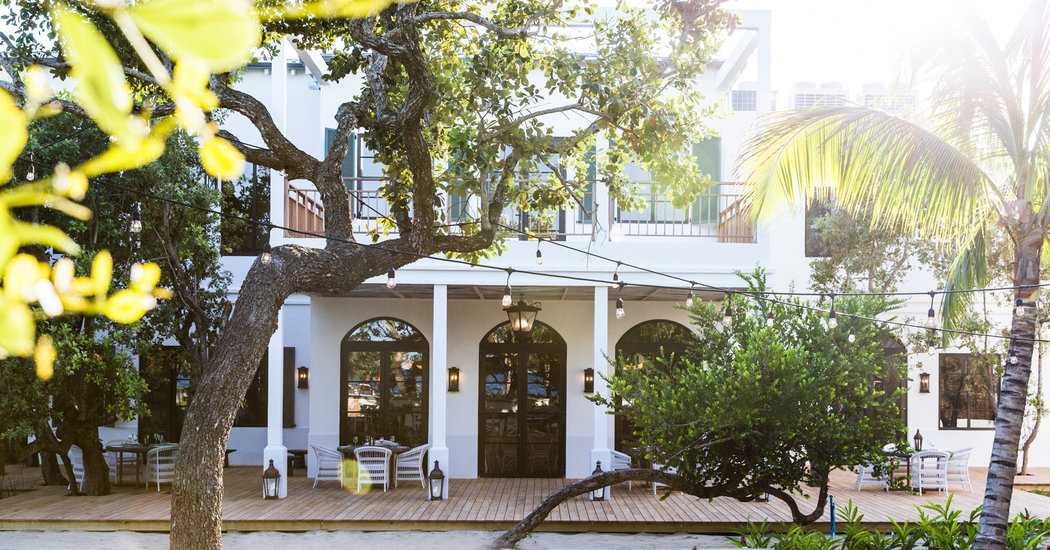 PLACENCIA, Belize — Two years ago, Chris Maynard was the harried owner of a restaurant in Toronto, up to his eyeballs in work and exasperated by relentless city regulations. When a code enforcement officer told him to remove a sandwich-board menu from the sidewalk, he was ready to call it quits.

Just then, he received a postcard from his girlfriend, Brandie Delouche, who was visiting Belize, the sun-dappled former British colony in Central America, with a friend.

“She asked me if I could see myself living there,” recalled Mr. Maynard, a 49-year-old former member of Canada’s national soccer team. “I looked at the TV and there was six feet of snow in New Brunswick. So I put the restaurant up for sale, sold the house in four days and packed everything into our Jeep. I’d never been to Belize, but I trusted her.”

The couple bought a two-bedroom house near the beach in Placencia, Belize, in early 2018 and have since added a pool and a pair of cottages for paying guests. They are part of a growing and persistent wave of foreign newcomers who see Belize as an opportunity to be seized.

They include retirees looking for inexpensive homes in the tropics, entrepreneurs eager for a slice of a largely untapped market and hospitality corporations like Four Seasons Hotels and Resorts, which has joined forces with a Mexican developer to build a resort and about 120 waterfront homes — some costing as much as $10 million — on a 280-acre island called Caye Chapel.

Another deserted island, Blackadore Caye, is the proposed site of an eco-resort spearheaded by the actor Leonardo DiCaprio.

In the dusty, ramshackle town of San Pedro, filled with zipping golf carts and barhopping tourists, a $50 million resort named Alaia, branded by Marriott’s Autograph Collection Hotels, is rising six stories above the beach. Further north, on Ambergris Caye, an iteration of Jimmy Buffett’s Margaritaville chain is emerging from the abandoned shell of a bankrupt resort. And on Isabella Caye, a Canadian developer is building what he calls a “resort village,” with 100 cabanas, a 24-room hotel, five restaurants and a nightclub.

Almost every new resort in Belize includes residences for purchase.

The rush is occurring in a tiny country — population about 375,000 — at the Western edge of the Caribbean that was long known mostly for having one of the world’s most extensive barrier reefs and for the legions of backpackers who came to trek through dense rainforest, climb Mayan ruins and camp on empty beaches.

Until 1990, Belize did not even have a tourism bureau.

The 16-mile road that runs the length of the Placencia Peninsula was unpaved until about a decade ago.

“This is a raw product,” Robert van Eerde, a hospitality consultant who was rebranding a six-year-old hotel — to be known as Umaya Resort & Adventures — on the peninsula. “We’re in the early days here. It has challenges: It’s not efficient. Banking is in the Stone Age. The skill sets are limited. The minute they sort that out, it will become a lot easier. But you don’t have to be a financial genius to understand that this area is expanding rapidly, because it’s happening all around you.”

Wedged between the southeastern tip of Mexico and Guatemala, Belize benefits from easy accessibility for North American visitors and developers. There are direct flights from several cities in the United States, including Houston, Los Angeles and Miami — the latter just two-and-a-quarter hours away. While there is corruption and poverty, Belize appears to have none of the social and political problems that bedevil Guatemala, El Salvador and Honduras.

“There’s a buzz around the country,” said Robi Das, a real estate analyst with Newmark Knight Frank in Miami. “All of the early investment is happening now. Belize is creating a very compelling alternative to the more established markets in the Caribbean. The investments are now at an institutional level — that’s new.”

It helps that Belize’s currency is pegged to the American dollar and that its legal system, a legacy of its century-long colonial status as British Honduras, is familiar to American and Canadian investors.

Buyers get full title to their land and pay extraordinarily low property rates. Foreign retirees are enticed by the lack of taxes on capital gains, on income from overseas or on imports of household possessions, including cars and boats. Unique among Central American countries, Belize’s predominant language is English.

“I have a lot of buyers who come down from the States — some want a name-brand resort, some want a townhouse, some want a business or land to build on,” Michael J. Fields, a real estate broker who moved to Belize three years ago from San Francisco, said over hog snapper and coconut curry at Elvi’s Kitchen in San Pedro.

“Other places are priced out. In baseball terms, we’re probably in the second or third inning; in Cancún, they’re in the ninth,” he said, referring to the resort city on the Yucatán Peninsula in Mexico.

Tourism in Belize has increased markedly in the last few years. In 2018, there were almost half a million overnight visitors, a 14.6 percent increase over 2017, the Belize Tourism Board says. In each of the past three years, cruise passenger arrivals have exceeded one million, with the 1.2 million in 2018 almost twice as many as in 2012.

“We now have the same level of tourism as some of the better-known Caribbean islands,” Andrew Ashcroft, a former director of the British Caribbean Bank and the developer of the Alaia resort in San Pedro, said as he gave a reporter a tour of the buzzing construction site. “It’s becoming more and more of a mature market, an emerging luxury market. The big brands are sniffing around.”

Scheduled for completion late next year, Alaia’s 79 condos and villas are on the market for between $215,000 and $1.3 million. As of mid-October, 41 had been sold. The resort will feature a beach club, a dive center and a rooftop swimming pool with large glass portholes in the bottom, suspended 55 feet in the air between two buildings.

Further south, on Caye Chapel, construction of the Four Seasons resort appears ready to begin early next year. Robert Haney, the chief development officer for IMI Worldwide Properties, which is handling sales for the project, said the resort — including the Four Seasons hotel and its over-the-water bungalows, a spa, restaurants, a marina and a golf course designed by Greg Norman and Lorena Ochoa — will be completed for opening in late 2021.

Prospective buyers of Caye Chapel’s “estate homesites” are welcomed at Philip S.W. Goldson International Airport in Belize City, guided through customs and put on a smaller plane for the short flight to an airstrip on the island.

Since there are almost no habitable dwellings on the island now, they are housed in large, elaborately appointed safari tents imported from South Africa, with air-conditioning, fully functioning bathrooms and mosquito nets over four-poster beds.

Less ceremoniously, new private homes elsewhere in Belize are selling with vigor. Dennis Craft, an agent at Sancas Realty, said that although the average price for luxury homes across the country remains under $1 million, there have been double-digit increases in prices over the last few years in coastal areas like Ambergris Caye and Placencia.

At the Grand Caribe development two miles north of San Pedro, a two-bedroom condo with an ocean view was being offered in October for $470,000. The buyer would pay $362 a month in homeowners’ association fees, $288 a year in property taxes and $1,914 a year for insurance.

Some of the retirees coming to Belize are drawn by the relatively low prices. Others have the means to splurge. Marty Smith, a commercial real estate developer from Temecula, Calif., and his fiancée, Tracy Park, first visited Belize in 2015 to look into “a potential development opportunity in an underdeveloped area,” Mr. Smith said. “We didn’t understand what Belize was all about.”

The couple, retired “empty nesters” and both 53, have bought a two-bedroom villa at Itz’ana Belize Resort & Residences on Placencia Peninsula, still under construction, which they will rent out when they are away; another house nearby that they plan to turn into a beach club “to give jobs to the locals,” Mr. Smith said; and a condominium at Margaritaville.

A dearth of development was commonplace in 1981, when the film director Francis Ford Coppola arrived shortly after the country achieved independence from Britain.

Mr. Coppola was looking for a jungle retreat that would recall the dense tropical rain forests of the Philippines, of which he had grown fond while shooting “Apocalypse Now” a few years earlier. He bought an abandoned lodge and its 72 acres in the Mountain Pine Ridge Forest Reserve and used it for a decade as a family haven. In 1993, it opened to the public as the Blancaneaux Lodge, a resort with 20 thatched-roof rooms and cottages within hearing distance of a waterfall.

By 2001, Mr. Coppola had bought a second property, a large seafront lot in Placencia that he turned into a sumptuous 25-cottage resort, the Turtle Inn. Guests can rent his daughter Sofia’s cottage, with private pool and butler, or a small island, Coral Caye, just offshore.