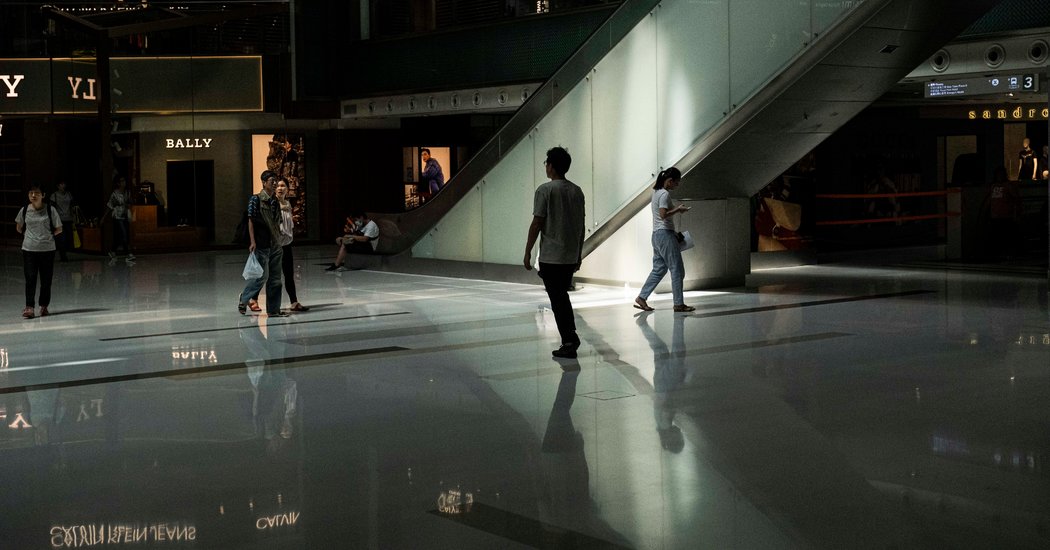 HONG KONG — Hong Kong was recovering on Saturday from street clashes, arson and vandalism that threw the city into chaos overnight, as residents braced for the prospect of further unrest over a contentious ban on face masks.

The streets of the normally bustling city were cloaked in eerie silence, with grocery stores, shopping malls and the entire subway system shuttered. Many neighborhoods were marred with damage from antigovernment protesters, who had broken windows, spray-painted ATMs, and set small fires across Hong Kong into the early hours on Saturday.

Concern pervaded the city about whether Hong Kong this weekend would be paralyzed by another round of clashes and confrontations after the city’s leader invoked rarely-used emergency powers on Friday to ban face masks during protests. The decision, by Hong Kong’s chief executive, Carrie Lam, has ignited further fears about the erosion of civil liberties in the semiautonomous territory.

Hong Kong enjoys more freedoms than mainland China. And the protest movement, which started over a contentious extradition bill, has evolved into a broader call to protect the autonomy of city.

During the monthslong protests, the street clashes between antigovernment protesters and the police have steadily grown more combative and dangerous. On Friday night, a 14-year-old boy was hit in the leg by a gunshot. His condition was later changed from serious to stable.

The police said separately that one of its plainclothes officers had fired a shot in self-defense on Friday. But as of Saturday afternoon, it was unclear whether the officer had shot the boy, as many protesters assumed.

The face mask ban, which took effect at 12:01 a.m. on Saturday, is a source of growing tension.

Hong Kong’s embattled leader, Carrie Lam, announced the ban on Friday, saying her government had a duty to “stop the escalating violence and restore calmness in society.”

Mrs. Lam’s government apparently hopes that invoking its emergency powers to enact the ban — which is punishable by fines and jail time — will dampen turnout at pro-democracy street demonstrations where protesters typically wear masks to hide their identities and guard against tear gas.

But Mrs. Lam’s announcement on Friday set off an especially violent wave of protests across the city, as protesters smashed windows and set fires at subway stations and at stores they perceived to be pro-government.

Friday’s violence and chaos prompted the authorities to shut down the entire subway system two hours earlier than normal. That the system was still closed as of early Saturday afternoon marked an exceedingly rare development in a global financial hub known for its efficient public transportation.

Many businesses were also closed across the city on Saturday, including several major malls and all but one branch of Bank of China. The Hong Kong Monetary Authority said that some bank branches had closed on account of vandalism and arson, and the police warned the public in a text message that “unauthorized public events expected in coming days may cause severe disruptions.”

In a televised statement on Saturday, Mrs. Lam asserted again that invoking emergency powers was necessary because the territory was facing an unprecedented level of violence, and pointed to the protesters who had throw gasoline bombs at police officers on Friday night as evidence of that threat.

“The rioters’ extreme acts have led to a very dark night, half-paralyzing Hong Kong society today,” Mrs. Lam said in a videotaped recording that showed her standing with a group of officials. “Everyone is very worried, concerned and even horrified.”

Mrs. Lam said that her government had the “greatest determination to put a stop to the violence” and urged the public to condemn the unrest. “We cannot tolerate rioters destroying the Hong Kong we cherish.”

Some protesters were planning to defy the new ban by gathering with masks in the streets over the weekend, although their exact plans were unclear as of early Saturday afternoon.

“The ban is not addressing the problem; it’s trying to get rid of the people who are trying to speak out about it,” said Castor Lau, 29, a protester who joined a protest on Friday in the Causeway Bay shopping district. “But Hong Kongers won’t be deterred from protests. We can’t let oppression govern our behavior.”

On Friday, Mrs. Lam said she was acting under a rarely used provision in the territory’s colonial-era law that allows the issuance of regulations in response to “a state of serious danger.” She emphasized repeatedly at a news conference that she was not declaring an emergency.

But by any measure, her decision to invoke the so-called Emergency Regulations Ordinance is rare and unusual. The law was last used during the pro-Communist riots that broke out in British-ruled Hong Kong in 1967, leaving more than 50 people dead.

So far, no one has died on the streets since the protests started in early June. But flashing ambulance lights have become a common sight on the fringes of street clashes between protesters and police officers in riot gear.

During a violent round of protests across the city on Tuesday, a protester was shot by a police officer for the first time since the protests began and was rushed to a hospital in critical condition. His condition later stabilized after emergency surgery.