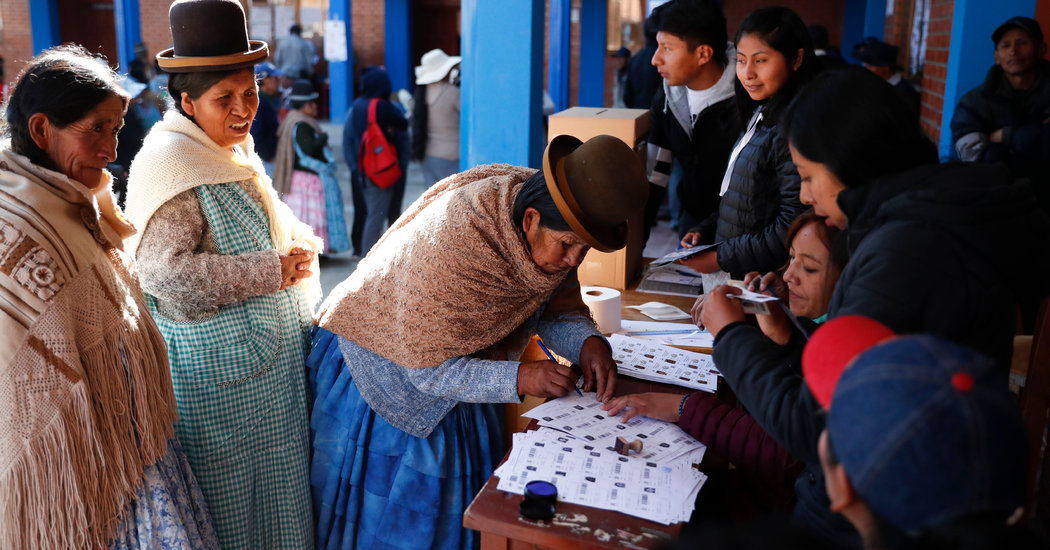 Bolivia’s general elections on Oct. 20 were marred by “a series of malicious operations aimed at altering the will expressed at the polls,” auditors from the Organization of American States said in a 100-page final report released Thursday. Deliberate wrongdoing by election officials, combined with a series of errors and irregularities in the vote count, made it impossible to validate the results, the auditors added.

The election’s initial official results handed Mr. Morales, Bolivia’s first Indigenous president, an unprecedented fourth term in office, defying the constitutional term limits he himself had set. An unexplained delay in the vote count, however, triggered a wave of protests across Bolivia’s major cities, which eventually forced Mr. Morales to resign and flee into exile in Mexico.

Mr. Morales himself agreed to the international report. His government called on the O.A.S. to conduct a “binding” audit of the vote in an attempt to quell the unrest triggered by his victory.

Mr. Morales’s party has since voted to annul the elections and hold a new vote; Mr. Morales is banned from running in the new election. A caretaker government arrested Bolivia’s top election officials on accusations of fraud and moved to elect a new electoral board.

The election ban marked a definitive end to Mr. Morales’s transformative 14 years in office, during which he lifted millions of Bolivians out of poverty, made major advances in civil rights and diversified the economy. Mr. Morales’s economic and political successes, however, bred increasingly authoritarian tendencies that eventually led to his downfall.

After declaring victory despite accusations of fraud, Mr. Morales failed to reestablish control of the mutinous cities. The final push came on Nov. 10, when the military asked Mr. Morales to resign to restore national peace. He left for exile the next day.

Mr. Morales was replaced by a conservative interim government, which moved to suppress his supporters and prosecute his officials. More than 30 people died in the unrest following the Oct. 20 vote, most of them Mr. Morales’s supporters who protested his ouster.

The report by the O.A.S.’s 36 auditors accused Bolivia’s election officials of setting up a “parallel technological scheme” of hidden servers, which permitted the alteration of results and forging of signatures of electoral observers.

The protests were triggered by the electoral board’s decision to stop counting votes when it appeared that Mr. Morales didn’t have a large enough margin of victory to avoid a runoff. When the final count resumed a day later, the remaining votes overwhelmingly went to Mr. Morales, allowing him to clinch the victory.

The O.A.S. auditors said the sudden halt in the transmission of results was “intentional, arbitrary and without technical basis.”

In their initial statements and a preliminary audit following the election, the O.A.S. officials called the sudden change in the voting trend “statistically unlikely.” The comments triggered criticism from some economists and statisticians in the United States, who argued that the change could be explained by strong support for Mr. Morales in the outstanding precincts.

Those critics, however, have not addressed the accusations of hidden data servers, forged signatures and other irregularities found by the O.A.S. observers, nor have they tried to explain the electoral council’s sudden decision to stop the count.