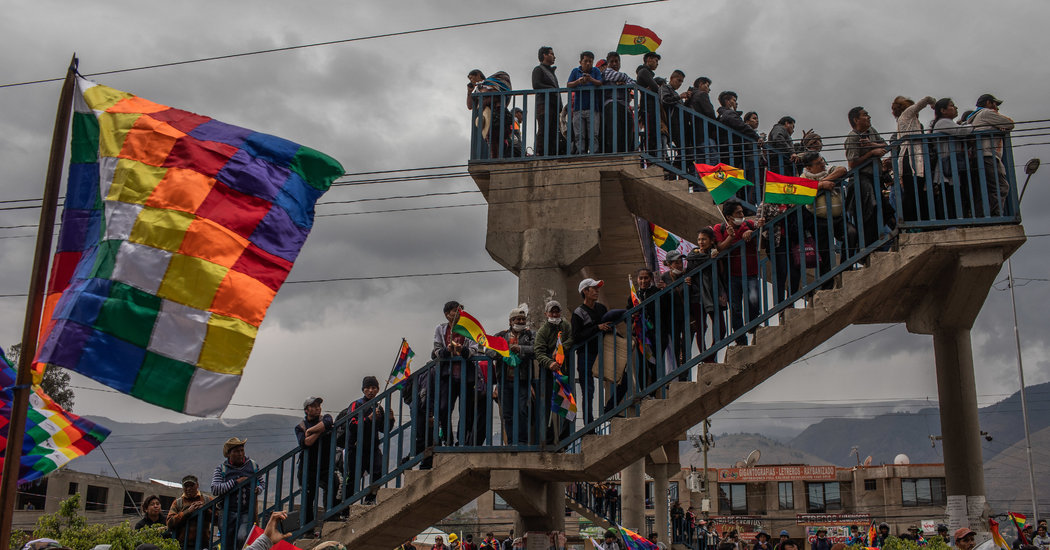 COCHABAMBA, Bolivia — In the days since the ouster of Evo Morales, Bolivia’s first Indigenous president, deep ethnic tensions that have long divided the country have erupted, complicating efforts to move Bolivia out of political crisis.

“We feel threatened,” said Juan Acume, a farmer from the Quechua, an Indigenous group, near a protest barricade of earth mounds and tree trunks across Bolivia’s main highway on Wednesday night. “They don’t represent us; they reject us, the Indigenous.”

Mr. Morales’s nearly 14 years in power represented a breakthrough for the three-quarters of Bolivians who are either of Indigenous descent or identify as members of Indigenous groups. But he also reinforced his base of support with explicit appeals to racial identity that many Bolivians found threatening and polarizing. Now that Mr. Morales has taken asylum in Mexico, his supporters fear the loss of their hard-won political and economic gains.

Their fears grew when Jeanine Añez Chavez, an opposition senator, swiftly proclaimed herself the country’s interim president on Tuesday, promising to unite the nation and to call new elections in January. But on Wednesday, when she unveiled her caretaker cabinet, not one of the 11 ministers identified as a member of an Indigenous group. After an outcry, she appointed an Indigenous minister of culture as she added more cabinet members.

She has since deleted the tweets, but not before they spread widely on social media. They were supplemented by a cascade of fake racist posts attributed to Ms. Añez and spread by Mr. Morales’s supporters, according to a media monitoring group, the Bolivia Verifies Observatory.

At a news conference on Friday, Ms. Añez denounced the fake tweets and said that her enemies were spreading disinformation. But asked if any of the racial tweets attributed to her were real, she did not respond.

“This rhetoric of racism and discrimination,” she said, “is not real, and we reject it.”

In some of the worst violence to convulse Bolivia in recent weeks, police fired tear gas and live rounds on Friday afternoon at Indigenous supporters of Mr. Morales who had attempted to march into Cochabamba, a city about 250 miles east of La Paz. At least five people died in the violence, according to Bolivia’s ombudsman’s office.

Tensions between the Indigenous population and Bolivia’s long-ruling elite of European descent date to Spanish colonial times, and have simmered under the surface ever since.

He said, “The significance of Evo was he rose up and achieved a lot of positive things for Indigenous people.”

But as Mr. Morales began losing his grip on power over the past three years, Mr. von Vacano added, “he rallied his Indigenous base through the rhetoric of racial distinctions, which has now polarized much of the country.”

During Mr. Morales’s time in office, the number of Indigenous representatives in ministries and congress grew, and included women who wear traditional full skirts called polleras, which were once disdained in public spaces.

He introduced a multicolored flag, called the Whipala, which represents the country’s diverse Indigenous groups, and made it an official flag alongside the country’s traditional Independence-era banner of red, green and yellow.

These policies have made him an idol of many in Bolivia’s main Indigenous communities, the Quechua and Aymara, which make up about a third of country’s adult population, according to the latest census.

They also have fueled resentment among many Bolivians of mixed or European descent, as well as the country’s smaller Indigenous groups, who accused Mr. Morales of ethnic favoritism and exploiting racial differences for political gain.

Mr. Morales’s critics say that his government’s fixation with a particular brand of Bolivia’s diverse Indigenous culture — the highland subsistence farming communities — masks the country’s growing cosmopolitanism. The percentage of Bolivians who have identified themselves as members of Indigenous groups fell to 41 percent in the last census, in 2012, from 62 percent a decade earlier.

“Racism exists in Bolivia; it existed before Evo, and it will never disappear,” said Michelle Kieffer, an insurance broker, as she sipped a cappuccino in an upper-middle-class neighborhood of the country’s administrative capital, La Paz.

“While Evo started an important discussion,” she added, “he also manipulated the race issue, and that has caused disunity. And now people of different races look at each other with suspicion.”

Bolivia’s political fault lines are complex; race often combines with regional and ideological divisions. There are Indigenous leaders who broke with Mr. Morales over allegations of corruption, and some Bolivians who are not Indigenous supported his Socialist politics. But the racial divide was apparent this past week when comparing the crowds marching for and against Mr. Morales.

These divisions are rocking cities like Cochabamba, a diverse regional capital of about 700,000 in a high Andean valley that is surrounded by the majority-Quechua speaking countryside. It was in Cochabamba where a decision by local police commandos last Friday to join demonstrators protesting Mr. Morales’s contested re-election spurred a nationwide defection of security forces.

The mutiny sounded the death knell for Mr. Morales’s embattled government. Pressured by the armed forces, Mr. Morales announced his resignation from his stronghold in the coca farming region of Cochabamba Province on Sunday, and flew into exile the next day.

After taking control of Cochabamba city, the rebellious police officers cut off the Whipala insignia from their uniforms and dumped them on the ground, a scene captured on a video shot by a local newspaper. Minutes later, antigovernment protesters grabbed the Whipala standard from Police Headquarters and burned it on the city’s main square.

To the rebels, the dual use of national flags was a symbol of disunity promoted by Mr. Morales.

“They made us believe that there were two Bolivias, and we always believed that there was one,” said Col. Miguel Mercado, the police commander of the neighboring province of Santa Cruz, in a television interview. “It has to shelter all of us.”

But to many of Bolivia’s Indigenous people, the Whipala desecration was a grave insult that symbolized the end of equal rights they had enjoyed under Mr. Morales. On Thursday, thousands of Cochabamba’s mainly Quechua coca leaf farmers descended on the outskirts of the regional capital waving the country’s two flags to demand Mr. Morales’s return.

Heavily armed military and police cordons blocked their entry into the city, a reminder to many coca farmers of the brutal repression they had suffered during Mr. Morales’s pro-American predecessor governments.

It was the biggest protest in Bolivia that day, yet not one local journalist was present in a city that boasts several local television channels and newspapers. To the protesters, it was yet another sign of cultural discrimination. The entertainment programs and commercials on Bolivia’s national television are almost exclusively filled with white actors and presenters.

The ethnic divide is, in part, religious. Mr. Morales had a tense relationship with the Roman Catholic Church, partly because he had encouraged traditional Aymara ceremonies in the presidential palace, a practice considered pagan in a country where Catholicism was a central part of the conquest of the Indians in the 16th century.

Ms. Añez was sworn in holding an oversized Bible, which she ceremoniously placed in the presidential palace. Although the vast majority of Bolivians consider themselves Christians, Ms. Añez’s conservative Catholicism signaled to some the return of European domination of Bolivian culture. When Ms. Añez appears in public, an aide frequently stands by her holding a cross.

Mr. Morales has fanned the growing cultural and racial tensions from his Mexican exile. In frequent news conferences and Twitter postings, he has called his opponents “racists and coup-mongers.”

His message was echoed almost verbatim by his supporters at a protest in Cochabamba on Thursday. Many carried homemade weapons and shields to protect themselves against what they expected to be an imminent police attack. At least one person died in clashes between Indigenous protesters and the police in a nearby province the previous day.

“They have burned our flag; they have laughed at our culture. This is racism; this is discrimination,” said Alfonso Coque, a coca grower. “We will give our lives for our rights.”