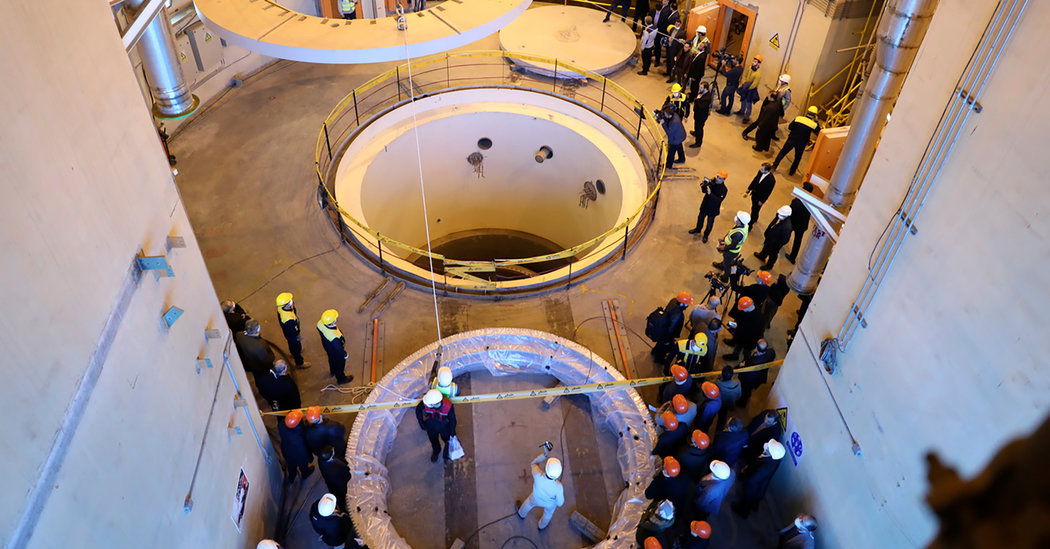 BRUSSELS — Europe is gambling on keeping the 2015 Iran nuclear deal alive by threatening to destroy it — a risky, oddly timed strategy that could backfire badly, European officials and analysts say.

The decision by France, Germany and Britain on Tuesday to challenge Iran’s breaches of the nuclear agreement and trigger what is known as the dispute resolution mechanism starts a clock that the Europeans may not be able to control, subject to unpredictable actions by the leaders of both Iran and the United States.

Already the move has angered Iran, which contends its breaches of the accord are justified and that the Europeans are bending toward President Trump and his “maximum pressure” campaign of sanctions on Tehran.

The Europeans insist otherwise. But watching Iran and the United States head for a possible military escalation, they are trying at least to avoid an outcome in which Iran moves down the North Korean road toward a nuclear bomb.

“If there is a European strategy here, it’s essentially to try to buy time,’’ said Nathalie Tocci, a former adviser to the European Union’s former foreign policy chief, Federica Mogherini, who helped negotiate the 2015 deal with Iran.

“The optimistic scenario is that they’ve done this to keep Trump happy and hope to stretch out the dispute process until the November U.S. elections,” Ms. Tocci said. The Europeans, she said, are wagering that “despite all the pressure on Iran, it won’t use the freedom it’s granted itself’’ to enrich uranium to bomb-ready levels.

The Europeans also are hoping to induce the United States and Iran to somehow engage in negotiations on an enhanced deal that Mr. Trump can call his own, even if it differs little from the current one, negotiated by President Barack Obama, that limited Iran’s nuclear activities — a deal Mr. Trump has called the worst in history.

It is also hard to see those around Mr. Trump, who have opposed the nuclear deal and supported his maximum pressure campaign, granting Iran any concession to get talks started, said Ian Bond, director of foreign policy at the Center for European Reform.

Wendy R. Sherman, a key American negotiator of the 2015 accord, described the use of the dispute mechanism as “incredibly risky” and said “it will increase the likelihood of the demise” of the deal.

Mr. Trump’s subordinates appear to believe their strategy is working. Iran’s government and economy are weakened, they note. And they say the United States killing of a top Iranian commander, Maj. Gen. Qassim Suleimani, in Baghdad nearly two weeks agohas deterred Iran in the region, rather than prompting further attempts to expel the Americans from Iraq and Syria.

But others, like Robert Malley, an American who helped negotiate the nuclear deal and now runs the International Crisis Group, say they are not so sure. They expect further retaliation from Iran and from the Iraqi militias it supports, including one led by a commander killed alongside General Suleimani.

An indication of the American administration’s mood came on Wednesday from Treasury Secretary Steven Mnuchin, who said that he and Secretary of State Mike Pompeo believed United Nations sanctions on Iran would be swiftly reimposed now that France, Britain and Germany had triggered the dispute-resolution mechanism. The Europeans made that move in response to Iran’s declarations that it would no longer honor the nuclear accord’s limits on Iranian enrichment of uranium — potential fuel for a bomb.

“I’ve had very direct discussions — as well as Secretary Pompeo has — with our counterparts,” Mr. Mnuchin told CNBC. “We look forward to working with them quickly and would expect that the U.N. sanctions will snap back into place.’’

But that outcome, which would likely terminate the agreement, is precisely what the Europeans say they are trying to avoid. There is nervousness that Prime Minister Boris Johnson of Britain, with his eye on a post-Brexit trade deal with Washington, might crack, but European officials consider that possibility unlikely.

Mr. Johnson and his government support the nuclear deal and collaborated on a statement with France and Germany on Tuesday that said “we are not joining a campaign to implement maximum pressure on Iran.” On Tuesday, Mr. Johnson urged new talks with Washington and Tehran to try to negotiate a “Trump deal” to supplant the current one.

Under the dispute mechanism, explained Ellie Geranmayeh, an Iran expert with the European Council on Foreign Relations, time limits on discussions can be extended by consent. Any party to the deal can go directly to the United Nations Security Council to request the re-imposition of United Nations sanctions, but no one is expected to do that, unless Mr. Johnson unexpectedly capitulates to Washington.

John R. Bolton, Mr. Trump’s former national security adviser, has argued that the Americans can make this request themselves. The Europeans disagree, saying Mr. Trump’s repudiation of the nuclear accord last year means the United States is no longer a party to it.

Still, Ms. Geranmayeh said, both Iran and the United States are unpredictable. “If there is no diplomacy or something else poisons it militarily, the Europeans have triggered a clock that could end up more quickly at the Security Council,’’ she said.

The political unrest in Iran, following the killing of General Suleimani and Iran’s accidental shooting down of a civilian airliner, creates enormous uncertainty. The government in Iran is cracking down on protests, and with parliamentary elections next month, hard-line rhetoric is bound to increase.

While Iran insists its nuclear work will remain peaceful, its decisions to disregard the nuclear deal’s limits on both the volume and purity of Iranian nuclear fuel have raised worries that the country could amass enough enriched uranium to create a bomb in a matter of months.

“I think the attack on Suleimani will make the Iranians want to accelerate their nuclear program,’’ Mr. Bond said. “They’ve seen Kim Jong-un and the lesson from Trump, which is if you have nuclear weapons you can get love letters from the president, and if you don’t, your generals can get killed.’’

Iran’s first reaction has been relative calm, Ms. Geranmayeh said. “But given the stalemate and the European inability to deliver the economic benefits it promised, Iran could end up by lashing out, and could do so on the nuclear side,’’ she said.

For example, Iran could restrict access to inspectors from the International Atomic Energy Agency or even expel them. “So it could all be worse, and you can’t separate that from the U.S.-Iran confrontation,’’ she said.

Which is why the three European countries are expected to continue to focus on finding an opportunity for a diplomatic breakthrough, as President Emmanuel Macron of France has been trying to do with Washington and Iran since the late summer.

Any new talks would face extraordinary obstacles. Iran says they would require sanctions relief as a precondition, and the Trump administration is instead increasing sanctions on Iran.

Some European officials have speculated that President Vladimir V. Putin of Russia, who has enjoyed some diplomatic successes where Washington has created vacuums, might try to mediate himself.

Mr. Bond said Russia was happy to be aligned with the Europeans on at least this issue, and has benefited from Europe’s split on Iran with the United States. And Moscow, which is a party to the nuclear deal, has made clear it does not want a nuclear-armed Iran.

François Heisbourg, a French defense analyst, said that he could imagine a phased negotiation — first to determine what sanctions Washington could lift as a sign of good faith, then some high-level meeting, much like Mr. Trump had with Mr. Kim.

While Mr. Heisbourg expressed skepticism, he praised the European countries for at least trying to de-escalate the tension while attempting to keep Iran from going down the North Korean path, risking a real war with the United States or Israel.

“This is an unholy mess,’’ he said. “The chance of the Europeans succeeding in a meaningful way to improve matters is very low. But we are in a position to try this. And no one else is even trying.’’