VILLA TUNARI, Bolivia — The road to Evo Morales’ political stronghold, in the heart of Bolivia’s coca farming region, is nearly impassable these days.

Supporters of Mr. Morales, the former Bolivian president, have cut off access to the region. So on a reporting trip there a few days ago, I found my way blocked — first by tires and wooden crates, later by tree trunks and barbed wire, and then by towering mounds of stones and earth.

At each of the nearly 100 barricades along the way, suspicious guards — sometimes several hundred of them — wielded sticks and nail boards, turning away anyone without a permit or medical emergency.

Finally, after traveling 100 miles through the seemingly endless debris, the tropical town of Villa Tunari emerged in a lush river valley in the Andean foothills. This is where Mr. Morales, the country’s first Indigenous president, started and ended his political career — and where he is still treated with almost superhuman reverence.

It’s also where the headquarters of resistance to Bolivia’s new interim government is found.

Thousands of coca farmers — men, women and children — are camped around the town’s strategic river bridge, obstructing Bolivia’s main highway and paralyzing its national economy. With no movement of goods, there are food and fuel shortages in major cities.

“Evo Morales is like a father to us,” said Antonietta Ledezi, a coca farmer who traveled 30 miles to Villa Tunari to join the blockade two weeks ago. “If he doesn’t return, there won’t be peace.”

Bolivia this week began to move toward resolving the vicious political crisis that led to Mr. Morales’ resignation from office earlier this month after 14 years as president. His downfall came after violent protests over a disputed election that he claimed to win, and after he had lost the backing of the military and the police.

New elections — in which Mr. Morales is banned from standing — are planned.

But farmers in Villa Tunari are determined to fight on for the return of their exiled leader. 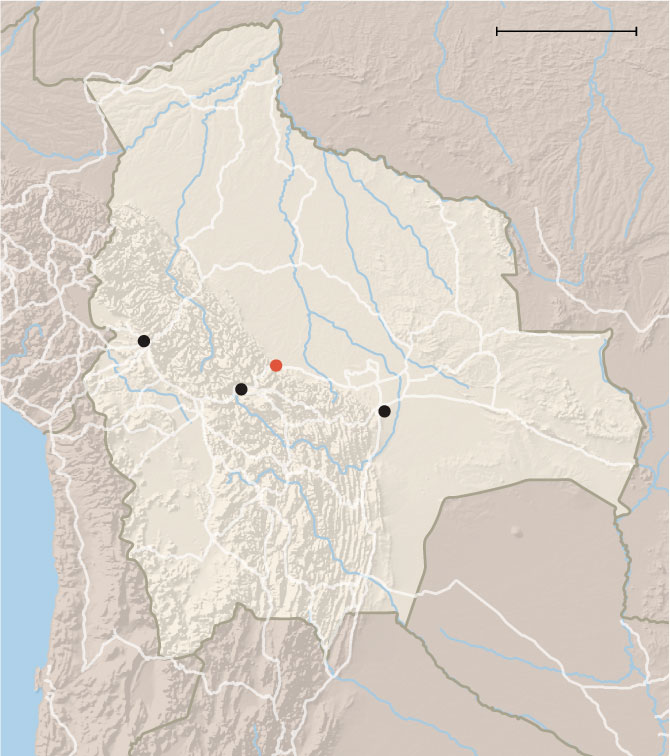 For the 50,000 local coca farming families, the ousting of Mr. Morales represents more than the end of a government that gave them a political voice and vast improvements in infrastructure, education and health. It is a threat to the peace that Mr. Morales, called Evo by everyone here, brought to this stigmatized and violent region.

A mere mention of Evo can unleash uncontrolled wailing at the barricades. Many remember him personally as a fellow coca farmer who rose to become the president of the confederation of local coca unions, a title he nominally holds to this day.

“He was the only president we have ever seen,” said Gregorio Choque, a coca farmer. “He was in the fields with us.”

Farmers began to converge on Villa Tunari on Nov. 10, the day Mr. Morales announced his resignation from the country’s presidency at the nearby headquarters of the coca confederation, an act that turned this gentrifying tourism hot spot into a war camp.

The next day, Mr. Morales fled the country to seek asylum in Mexico, departing from an airport in the coca region.

Soon after, sprawling assemblies of makeshift tents, hastily constructed out of tree trunks and branches, covered the highway, as groups of farmers took shifts reinforcing the barricades, cooking communal meals or trying to rest on bare asphalt in the sweltering heat.

They competed for status by decorating their sections of the barricades with placards calling for the resignation of the country’s interim president, Jeanine Añez, and justice for about 30 pro-Evo protesters killed in clashes with security forces.

“We don’t recognize this new illegal government,” said Andronico Rodríguez, Evo’s deputy in the local labor movement, who is seen by many here as the former president’s successor. “Our objective is to allow Evo to finish out his term.”

The swift rise of Mr. Rodríguez, 30, reflects Evo’s social investments in the region.

Mr. Rodríguez began attending his local union meetings after school with his mother when he was 9, reading out the meeting minutes to the mostly illiterate members.

Now, he has the unenviable challenge of aligning the coca farmers’s eternal loyalty to Evo with the country’s evolving political landscape. This week, he traveled to La Paz to join negotiations over the country’s looming elections.

The coca farmers’ discipline, self-sufficiency in food and strategic location in the center of the country gives them an ability to keep up the blockade for months, if their demands are not met, he said.

Many barricades hang effigies of Ms. Añez, as well as conservative opposition leaders and the former military chief, Gen. Williams Kaliman, who refused to deploy soldiers to save Evo’s government.

The neat, usually flawless, wording of the placards was itself a sign of pride in the huge advances in literacy that Evo brought to the region.

After checking my credentials and luggage on the recent trip I took to the area, the guards at nearly every barricade on the way to the town insisted that I get out of the car so they could speak with a reporter. They wanted to document their political grievances, another legacy of the self-worth instilled by Evo in the local residents, whom many Bolivians write off as rabble-rousing pawns in the global drug trade.

“They call us drug traffickers, terrorists, vandals who are not worth anything,” said one farmer, Hironimo Tosico, breaking into tears. “I’m a producer of banana, plantain, citruses, watermelons. I’m not a troublemaker. I’m a good citizen.”

Bolivia’s Indigenous people have used coca plants for centuries to fight fatigue and hunger, but the plant is also the raw material for cocaine. On coming to power, Mr. Morales legalized coca production for traditional use, but put in place strict output limits.

Under his rule, coca production in the region, Chapare, fell despite a large increase in the farming population and global cocaine demand, according to the United Nations. Local unions today regulate the planting area to protect prices and prevent excess crops going to cocaine labs.

These policies brought economic stability that allowed farmers to diversify into other crops. They also brought social peace after decades of territorial infighting and repression by the military’s coca eradication squads.

Mr. Morales’s party got 90 percent of the vote in Chapare in the last elections in October. But not everyone here supports the blockade.

The tension is largely generational. Many of the region’s older coca farmers have since invested in shops, small hotels and restaurants in Villa Tunari, becoming the town’s new middle class and helping to convert it into an outdoor tourism hub.

Now, as the blockade grinds into its third week, the town’s shuttered hotels are already looking worn down, with jungle vegetation growing freely around abandoned swimming pools. Empty restaurants are cooking one meal a day with firewood.

Locals without land have also been hard hit. Nora Choque, who works in a motel, last week began walking with her two small children to the closest city, Cochabamba, 100 miles up the mountains, because she said she had run out of food.

“There’s nothing left for us here,” she said, as she trudged through Villa Tunari in the afternoon heat.

The blockade has also swept up unexpected bystanders.

Groups of Chinese road builders sat gloomily by their isolated campsites on the blockaded highway. Families of Haitian labor migrants heading on foot to Chile sat stranded in a tollbooth. A lone European backpacker scoured for food amid the barricades near Villa Tunari’s hostel.

The barricades fully come to life at dusk.

With a reprieve from the heat, the blocked-off road becomes a bustling human sea. Street sellers appear out of nowhere with steaming pots of giant corn kernels, freeze-dried baby potatoes, yucca and spicy peanut sauce for those with a couple spare dollars. Those less fortunate chew on the coca leaf to beat the hunger.

After dinner, the union members gather for a roll call and a discussion, usually in the local Quechua language, of the day’s political news from La Paz, before setting down to rest on the asphalt or bare earth under skimpy tarps or tree branches.

The silence of the road at night is occasionally broken by the screeching of buses carrying reinforcements to the protest’s front line, outside Cochabamba.

“It’s tough being here, while our crops rot in the fields,” said Serafino Oliveros, a coca farmer, while perched under a six-foot wet tarp with four union companions. “But we understand that this is a necessary sacrifice so that our children have the same rights we had under Evo.”