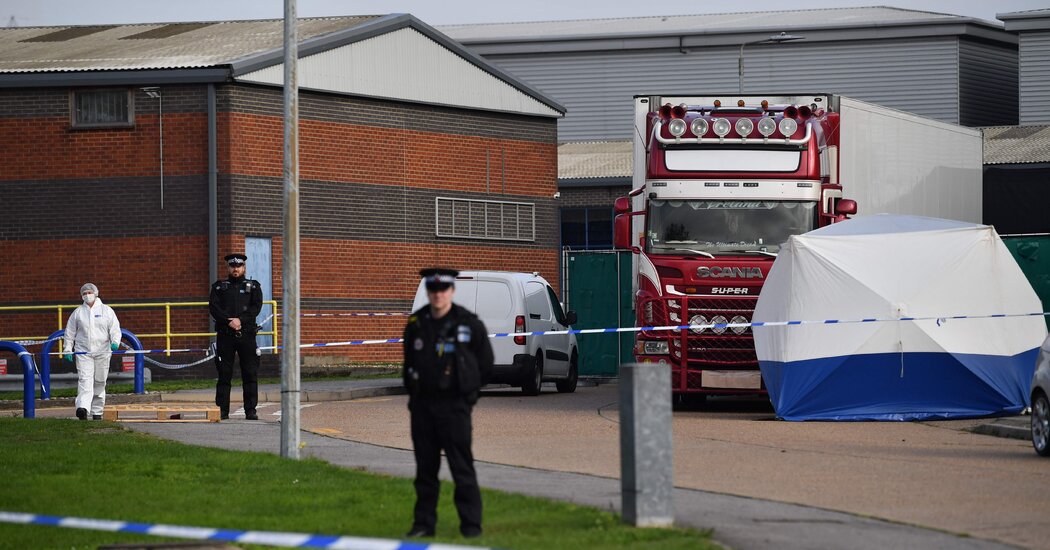 LONDON — A trucking company manager from Northern Ireland pleaded guilty on Friday to the manslaughter of 39 Vietnamese people, including two 15-year-old boys, whose bodies were found last year in a truck trailer in Essex, east of London.

Ronan Hughes, 40, from County Armagh in Northern Ireland, made the plea at the Old Bailey criminal court in London, where he accepted responsibility for his role in a case that shocked Britons and brought attention to the deadly perils of human trafficking. In addition to manslaughter, Mr. Hughes admitted conspiring to assist unlawful immigration.

The bodies of the 39 victims were discovered at an industrial estate in the town of Grays in Essex, not long after the truck in which they were concealed arrived at Purfleet on a ferry from Zeebrugge in Belgium in the early hours of Oct. 23 last year.

Mr. Hughes, who was extradited to Britain from Ireland in June, was one of several people accused of being part of a people smuggling ring. The truck driver, Maurice Robinson, also from Northern Ireland, had already pleaded guilty to manslaughter charges.

Most of the victims, aged between 15 and 44, were from Nghe An and Ha Tinh provinces in Vietnam, and had left their homes in search of better economic prospects. Thirty-one of them were men or boys, and eight were women. An inquest established the cause of death as asphyxia and hyperthermia, when the body excessively overheats.

Another man, Eamonn Harrison, aged 23 and from Northern Ireland, denied 39 charges of manslaughter and also pleaded not guilty to conspiring to assist unlawful immigration. He faces a trial in October.