GORIS, Armenia — Fierce fighting over a breakaway Armenian enclave in Azerbaijan partly subsided on Saturday after a cease-fire took effect. But there was little expectation of a durable peace two weeks into the most violent conflict that the volatile region has seen in decades.

The cease-fire agreement, reached by Armenia and Azerbaijan in Moscow early Saturday after 10 hours of overnight talks, raised hopes of at least a brief respite in the artillery bombardment, drone strikes and trench warfare that have killed hundreds since Azerbaijan launched an offensive on Sept. 27.

Each side accused the other of mounting new attacks after the cease-fire took effect at noon on Saturday. But eyewitnesses reported no shelling in the enclave’s capital, Stepanakert, for much of the afternoon and evening, and the Armenian Defense Ministry said most of the front line was “relatively calm.”

Shortly before midnight Saturday, though, people in Stepanakert said they heard a series of explosions and the wail of air raid sirens, suggesting the cease-fire was teetering just 12 hours after it came into force. Around the same time, Azerbaijan’s Defense Ministry said the Azerbaijani town of Terter, near the border of the enclave, had come under attack.

Earlier in the day, the International Committee of the Red Cross said it stood ready to use the lull to retrieve the remains of the dead at the front line, where the ethnic Armenian enclave of Nagorno-Karabakh borders Azerbaijani-controlled territory. Emergency services workers fanned out looking for unexploded ordnance, a journalist based in the city, Gegham Baghdasaryan, said in a telephone interview.

Nagorno-Karabakh, with a population of about 150,000, is a landlocked territory in the Caucasus, the mountain range where Europe meets Asia, between the Black Sea and the Caspian Sea. The territory, smaller than Connecticut, has little geostrategic significance on its own, but is the subject of an escalating test of strength among regional powers.

Russia, Iran and an increasingly assertive Turkey have all been jockeying for influence in the region.

“I hope that the world’s power centers will find enough means of influence on Azerbaijan to have it abide by the cease-fire,” Mr. Baghdasaryan said.

The enclave is part of Azerbaijan under international law, but has been controlled by a breakaway government closely aligned with Armenia since a yearslong war over the territory in the early 1990s. About 20,000 people were killed, and about a million, mostly Azerbaijanis, were displaced in that war. 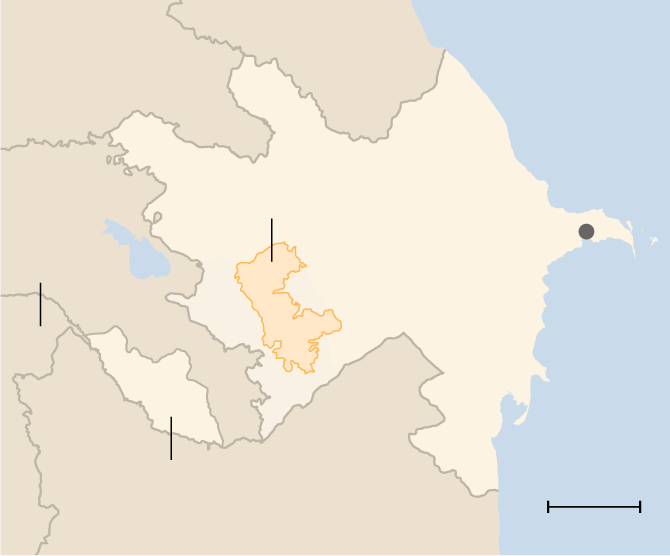 Azerbaijan says it is now fighting to reclaim land that rightfully belongs to the country, while Armenia says ceding the land to Azerbaijan could bring about the destruction of the Armenian population in Nagorno-Karabakh.

Neither side appears in a mood to compromise, with rhetoric from all parties having grown harsher in recent months. The current war has already killed more than 400 Armenian soldiers and, according to the United Nations, more than 50 civilians; Azerbaijan has not disclosed its military casualties.

“This war did not surprise anyone here,” said Zaur Shiriyev, an analyst with the International Crisis Group based in the Azerbaijani capital, Baku. “No one actually questions why it’s happening now.”

Mr. Shiriyev said he did not expect the cease-fire to hold for long, in part because the agreement announced in Moscow early Saturday morning contained no specifics on geography or timing.

“It can be declared inoperative at any time,” he said.

Turkey, a member of NATO, is Azerbaijan’s major ally in the region. It is now challenging Russia’s longtime geopolitical primacy in the southern Caucasus, which was part of the Soviet Union.

Russia has a mutual-defense treaty with Armenia and maintains a military base there, but has also nurtured close ties with Azerbaijan.

The region’s southern neighbor, Iran, is also a major player, and President Hassan Rouhani of Iran called President Vladimir V. Putin of Russia on Saturday to discuss the conflict, the Kremlin said.

Whether or not the cease-fire, which was brokered by Russia, holds will test Mr. Putin’s ability to influence events in his country’s post-Soviet neighborhood.

Azerbaijan insists Armenia must withdraw its troops from Nagorno-Karabakh if it wants peace. The foreign minister of Azerbaijan, Jeyhun Bayramov, warned Saturday that his country was prepared to continue fighting, while Turkey said it would stand by “brotherly Azerbaijan” on the battlefield and at the negotiating table.

“Azerbaijan has shown Armenia and the whole world that it has the ability and the self confidence to reclaim its territories under occupation for nearly 30 years,” the Turkish Foreign Ministry said Saturday. By agreeing to the cease-fire, the ministry said, “Azerbaijan gave Armenia a last opportunity to withdraw from the territories it has occupied.”