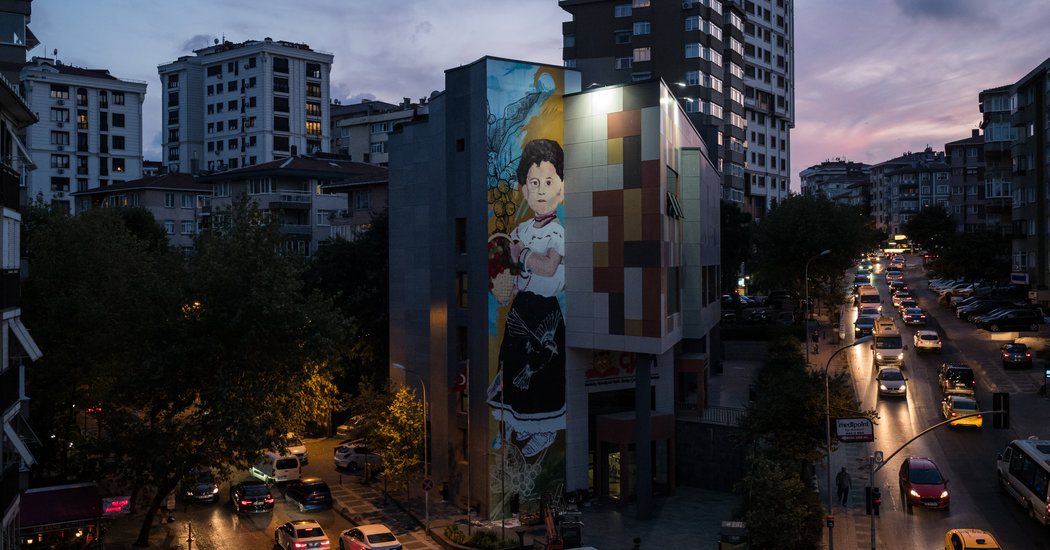 Where the average eye sees empty and drab building walls, Mr. López, the founder of the graffiti artists crew Vértigo Graffiti, sees blank canvases, opportunities to colorfully further the cause of social justice, whether in his home city — the Colombian capital, Bogotá — or the rest of the world.

Looking younger than his 38 years, sporting a scruffy beard, wearing jeans and an untucked casual shirt, he was constantly on the move recently crisscrossing Bogotá, which has become one of the world’s top graffiti destinations.

A few days later he was wandering the cobblestoned back alleys of Cartagena, a historic coastal Colombian city that is also famous for its graffiti art. And several months later he was still on the go — this time in Turkey with his crew.

Not a graffiti artist himself, Mr. López plays multiple roles: art director, business manager, promoter, negotiator, lawyer, entrepreneur, festival producer, even tour guide. He is, in addition, a professor of entertainment law and cultural industries at the Jorge Tadeo Lozano University in Bogotá.

He refused to give himself a job title. “My job is to start conversations,” he said succinctly, in one of the few times he was succinct.

He now plays a key role at the forefront of a street art revolution that reflects his nation’s new face of pride and self-expression.

He sprinkles his nonstop passionate discourses on the importance of graffiti with references to great thinkers and authors — John Cheever, Umberto Eco and Aristotle, in one recent disquisition.

Mr. López is the son of two academics and staunch socialists, whose beliefs are reflected in his name: Fidel, for the former Cuban leader, Fidel Castro; and Camilo, after Camilo Cienfuegos, a close comrade in Castro’s guerrilla army who died in a plane crash shortly after the Cuban revolutionaries ousted the dictator Fulgencio Batista.

But Mr. López’s path to a passion that arguably has revolutionary impact — and that satisfied his parents — was often circuitous.

Urged by his parents to gain the best education and then turn it into a fight for social justice, he decided to become a lawyer. Having graduated from one of Bogotá’s top law schools, Mr. López turned his sights to Harvard Law School, and was shattered when he was rejected.

That Harvard rejection, however, inadvertently led to his current occupation.

“I was 28, my life was turned upside down,” Mr. López said. “So I went from Cambridge, Mass., to Manhattan to bury my sorrows and blow off steam.”

“In SoHo, I stumbled across such a vibrant graffiti art scene that spoke of social injustice. It was even being sold at galleries,” he said. “That was when a light bulb went on. I thought, ‘Maybe one could do both: spark a social revolution and make a business out of it.’”

“Those first years were difficult,” he said. “We started doing demos for free in private homes to build a portfolio. There was a lot of trial and error as I learned what could be possible. Even though painting on public walls was illegal at that time, there was early interest from some companies. We created a huge campaign with Coca-Cola and Sprite in 2011.”

In the aftermath of a police killing of a 16-year-old graffiti artist that was widely condemned, he helped persuade the city government in 2012 to decriminalize graffiti painting in certain areas.

He often fields questions about an artistic endeavor that largely defies definition. Are the artists independent anarchists or opportunistic capitalists selling out to commercial interests? Is it vandalism or an exercise in freedom of expression?

The answers are less important, said Mr. López, than the way graffiti is changing people’s perception of his country.

It’s a shift that others have noticed, too.

“Before I moved here three years ago, I had the same misconception as many people — Colombia was a country of mustachioed coffee farmers and drug lords,” said Mark Bingle, the general manager of the Four Seasons Casa Medina in Bogotá, for which Mr. Lopez now leads graffiti tours.

“Camilo opened my eyes to the new Colombia,” Mr. Bingle said. “Going around, one sees that Bogotá’s walls are like a living, breathing museum of modern history.”

On a recent day, Mr. López dashed from meeting to meeting in Bogotá: working with Digitalistic Ad Agency’s Pablo Cebellos, whose company represents the major spray paint makers Montana and Pintuco; sprinting to a session trying to convince a conservative textile manufacturer that edgy graffiti murals in its retail outlets would appeal to millennials; then back to Vértigo Graffiti’s studio to check on works in progress.

The studio, a second-floor walk-up with no signage from the street in a nondescript neighborhood, is a jumble of the works in progress, preliminary sketches for walls that the crew will paint, commissioned pieces for private residences and fine art projects they are working on for themselves.

Canvases, cans of paint, spray paint and smelly rags are strewn all over. Mr. López’s office, if you can call it that, is a makeshift tabletop in one corner. He makes calls and sends texts standing up from wherever he can.

“A lot of people have wanted to represent us, but we trusted only Camilo,” said Sebastián García (nickname Ecks), who along with Santiago Castro (Cazdos), Ricardo Vasquez (Yurika) and Estefany Fajardo (Zas), the only female member, make up Vértigo Graffiti.

The crew’s tag — those characteristic artist signatures found in a corner of a painting — is M.D.C., which stands for Mientras Duermen Crew (in Spanish, the While They Sleep Crew).

“These folks are a peculiar mix of tough guy and sensitive guy,” Mr. López said. “We’re on the same page about what we’ll do and what we won’t do for money.”

On his way to yet another meet-up, he stopped at “The Kiss of the Invisibles,” a 10-story-tall mural that Vértigo Graffiti created in 2013, based on a famous photograph of two homeless people kissing.

“It generated a lot of attention,” Mr. López said. “But for me it meant a lot more, because when my father saw it, it was the first time he said he respected what I was trying to do with this medium of expression, to make a valuable social statement.”

The next stop was Bogotá’s Graffiti District, which Vértigo Graffiti and more than 50 prominent artists from around the world painted in 2017. It stretches on both sides of two blocks, covering the exterior walls of several companies — all with permission and subsidy from the city.

“This was one of the dirtiest and most polluted areas of Bogotá,” he said, strolling down the corridor in the industrial neighborhood, Puente Aranda. “Now it’s cleaned up and attracts tourists and aficionados from everywhere.”

In the last year or so, Mr. López has taken Vértigo Graffiti on the road to Antwerp, Holland; Amman, Jordan; Ottawa; and Miami.

In September they traveled to Turkey, where they painted a wall of the Halis Kurtca children’s cultural center in Kadikoy, a suburb of Istanbul, in commemoration of the 60th anniversary of diplomatic relations between Colombia and Turkey.

The image depicts a Colombian girl dressed in the traditional garb of a coffee farmer, holding a basket of fresh-picked beans, a bird floating on her black skirt.

Mr. López said he could not have imagined a decade ago that graffiti, which began as a protest against all things establishment, would now be used to symbolize links between two governments.

But he has still loftier ambitions for graffiti. “I want it to become recognized as a high art,” he said, “like opera, ballet and theater.”