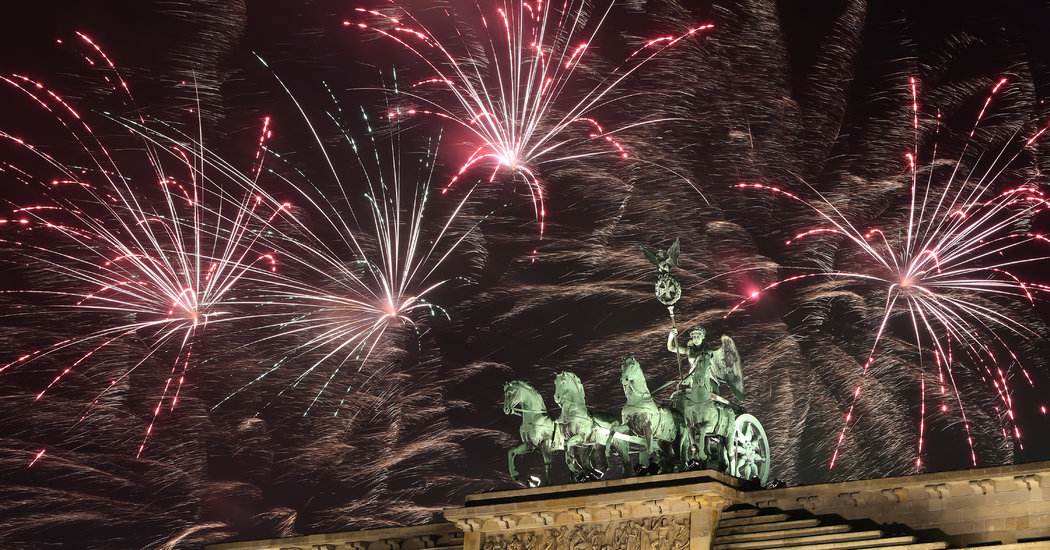 BERLIN — Fireworks have long been a staple of New Year’s Eve celebrations in Germany, with revelers setting off their own pyrotechnics in the annual reverie of booze and exuberance known in the country as “Silvester.”

But for the first time this year, Berlin will join dozens of other German cities and communities in instituting a partial ban on private fireworks, with three zones in the capital designated fireworks free on New Year’s Eve.

Most official and private fireworks displays will continue as normal — including the spectacular show at Berlin’s iconic Brandenburg Gate — and skies over much of the country will still be alight, saturated with the sound of millions of tiny explosions.

But as the decade comes to a close, Germany’s commitment to one of its most enduring New Year’s Eve traditions seems to be wavering.

The reasons vary: Berlin’s ban is focused on public safety, while Aachen, a town in western Germany that limited the use of high-flying fireworks, is worried about potential damage to its historic buildings. And some areas pointed to environmental and health concerns over the fine dust particles created by the explosions.

“I’m convinced that for the next Silvester celebration, private fireworks vanish in medium and large cities in Germany,” said Jürgen Resch, the co-leader of Environmental Action Germany, an organization that has sued cities into diesel driving bans. (Germans refer to New Year’s Eve as Silvester in honor of Pope Silvester, whose saint’s day is Dec. 31.)

Fine-particle emissions spike in the days after New Year’s celebrations, according to Germany’s federal office for the environment: Fireworks lit on just one day each year amount to as much as a quarter of the particle emissions given off yearly by all wood-fires in the country.

Under the banner of “Silvesters for Future,” a nod toward the Fridays for Future movement launched by Greta Thunberg, the Swedish environmental activist, Mr. Resch’s group contacted 98 areas with higher than average particle measurements and asked them to change their New Year’s Eve tradition.

Thirty-six communities wrote back promising to make alternative arrangements for the celebration, if not this year then sometime in the future.

The federal government is also considering changing a law that would allow cities the autonomy to ban the use of private fireworks altogether.

“One of the biggest changes is the awakening of the youth on this issue,” said Mr. Resch, who described a yearslong debate about the issue.

A poll conducted by the research firm YouGov for the German RND news service showed shifting attitudes, with 57 percent of respondents saying they thought a ban was a positive idea.

Another poll, conducted by YouGov last year, indicated that 61 percent of people polled thought fireworks should be forbidden in dense city centers, and 86 percent felt the tradition produced too much garbage.

Private fireworks have a long-established history in Germany, where they’ve been at the core of Silvester celebrations for years. Many Germans spend hundreds of euros on their own private firework displays.

The German Pyrotechnic Industry Association, a trade group that has represented firework makers since the 1960s, estimates that last year roughly 130 million euros were spent on legal fireworks in Germany.

Under the current rules, fireworks can be sold on the three business days preceding New Year’s Eve, though two major German supermarket chains and a home hardware business recently announced plans to phase out or reduce fireworks sales.

The fireworks can be legally lit only on Dec. 31 and Jan. 1, although in big cities the characteristic bangs can be heard several days before and after that time.

Klaus Gotzen, the director of the German Pyrotechnic Industry Association, said that safety has always been a priority for the group, but the conversation around fireworks is changing.

“This year there is a bigger discussion about the meaning of the tradition as such,” he said.

Still, the discussion about limiting what some say is an essential part of the New Year’s celebration exposed the usual rift between progressives and conservatives.

These groups last found themselves at odds over another New Year’s Eve tradition when lead was banned in 2018 from use in the traditional “Bleigiessen” — a fortune-telling game that involved pouring molten lead into a bowl of cold water.

A former publisher of the conservative Frankfurter Allgemeine Zeigung, Hugo Müller-Vogg, suggested in the online version of a newsmagazine, FOCUS, that the changing rules around fireworks might actually cause people to spend more money on fireworks and film this year’s rituals.

“So that one can show one’s grandchildren what once was — a happy Silvester celebration,” Mr. Müller-Vogg wrote.