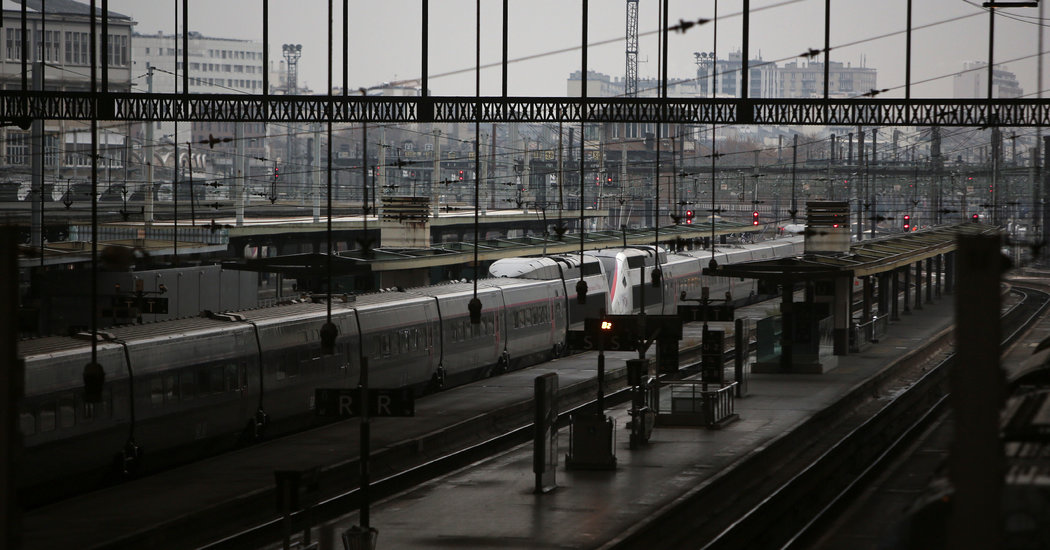 PARIS — Angry railway employees, teachers and other workers in France showed no signs of backing down from a nationwide strike on Friday, having brought public transportation to a standstill in a protest over President Emmanuel Macron’s plans to overhaul the nation’s pension system.

Travel was expected to be severely limited between French cities on Friday, with nine out of 10 high-speed trains and seven out of 10 regional express trains likely to be canceled. Stations around the country were almost empty, and some schools remained closed.

In Paris, most metro lines were shut down and bus services were heavily disrupted. The streets were filled with more bicycles and electric scooters than usual, as Parisians used alternative measures to zip around stalled traffic in parts of the capital.

Transportation disruptions were expected to continue into the weekend and early next week, and labor unions announced on Friday that they were planning for new demonstrations on Tuesday, including a march in southern Paris.

Bernadette Groison, the head of one of France’s largest teachers union, told reporters after a meeting with other labor groups that they were “determined” to make the strikes last.

“This is not a mood swing lasting a couple days,” she said.

The government was faced with huge protests in Paris and other cities on Thursday, some of the biggest in recent years. The authorities estimated that at least 800,000 people demonstrated across the country, with labor unions putting the figure at 1.5 million.

The government said it was open to discussions about the details of Mr. Macron’s plan, but it showed no signs of retreating from its broad outlines. Seeking to streamline France’s generous pension system by combining a complex web of 42 pension schemes, it would create a points-based system for every worker, regardless of status or sector.

The lack of specifics has left many French residents, many of whom distrust Mr. Macron, believing that their pensions will decrease.

It is not clear, for instance, when the pension changes would go into effect and for which generation, or how workers currently in a special pension scheme, like railway workers, would make the transition to a unified scheme. It is also unclear how difficult working conditions would be taken into account.

Jean-Paul Delevoye, a French politician whom Mr. Macron has put in charge of a report on pension changes, acknowledged on Thursday that some workers felt they would be cheated out of benefits that had been promised to them years ago.

But he said that a universal points-based system would be “more understandable” and fairer. “We will bring answers to the worries that are being expressed,” he said.

Sporadic violence peppered the protests in Paris, Rennes, Bordeaux and other cities. The police fired tear gas as they faced off with some protesters.

Édouard Philippe, France’s prime minister, told reporters on Thursday evening that despite the scattered clashes between the police and violent groups called “breakers,” the “demonstrations went fine pretty much everywhere in France.”

Labor union leaders are scheduled to meet with the government on Monday, and Mr. Philippe is expected to give the “general architecture” of the pension plans next week. But it is unclear whether that will placate the striking workers, some of whom have vowed to continue until the plans are scrapped altogether.

Philippe Martinez, the head of the General Confederation of Labor, one of the largest unions opposed to the pension overhaul, called for renewed pressure on the government.

“Strikes need to spread to all companies,” Mr. Martinez said on LCI, a television news channel.